The Parlor at Maple Hall Opens on Gay Street 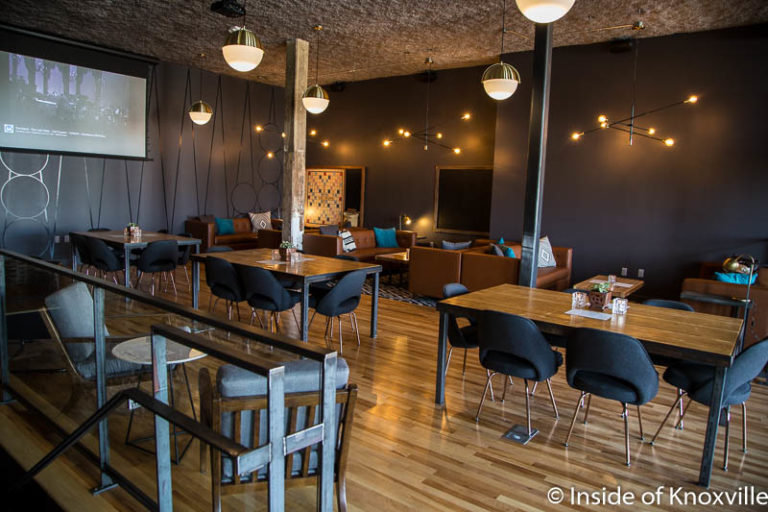 A part of the original vision of owners Greg Cox and Kevin Rice, Maple Hall has added an expansion business, as The Parlor opened yesterday behind Maple Hall. It’s accessible via the stairwell at the rear of the lanes or directly from the Promenade to the rear of the building. The Promenade Garage offers free parking after six and is a perfect spot to park for Maple Hall, the Parlor or any of the businesses along that block.

At least initially the Parlor will have similar hours to Maple Hall, though it will open at 4:00 PM each day (Maple Hall opens at 11:00 some days) and close at about 1:30 AM. It’s both a bar and a restaurant as the entire menu at Maple Hall is available and the kitchen is open until 12:30 AM. It’s a great place to wait for your lane to be available, but it’s also an attractive space in its own right, and the owners feel, a perfect place for a date night.

A full bar is offered with a higher grade of spirits than that in Maple Hall and an elevated cocktail list. The $10 Parlor cocktails have locally themed names and ingredients. The Island Home, for example, features Aviation gin. The Kid Curry – a tip of the hat to Knoxville’s most famous outlaw story – features Los Amantes Mezcal – from Kid Curry’s original stomping grounds. You’ll also find the Forks of the River, The Steamboat Atlas, the Keyhole, Damn the Torpedo and the 1898. They also have non-alcoholic cocktails. A small selection of wine is included and ten beers are on tap, including local beer and, The Parlor Common Steam, a beer brewed specifically for the Parlor by Schaffly Beer of St. Louis.

Each carry a piece of Knoxville’s story and Assistant Manager Ryan Sheley, whose hand is deeply seen in the new business, says this is very intentional. They hope every drink order carries with it a conversation about our city. Originally from Knoxville, Ryan returned in 2015 and is passionate about the city he loves. He brings years of restaurant experience to the mix.

The bar has been approved for an occupancy of 80 and ample seating is provided throughout. You’ll recognize the same couches as those in Maple Hall, with three sections of two facing sofas. The middle of the room includes larger tables (with surfaces made from the boards of a bowling alley in south Knoxville), with small tables on the edge of the main room and just the other side of the arches. Bar seating and another cozy spot off to one side offer options for groups or couples, more private spaces and more social spaces.

The room has a projector and large screen and Ryan tells me these will be used mostly for projecting concerts, though not necessarily with sound – more to establish a different ambiance than bars showing sports. The first evening when I arrived, the Band’s, “Last Waltz,” played and Ryan said this would be a typical choice. A good sound system obscured most of the sound from the bowling downstairs and he said they hope to feature classic jazz and soul. They’ll also have their vintage turntable hooked up soon and it will play over the sound system.

General Manager Gina Truitt said the space is also available for meetings or private events. The furniture can be easily reconfigured to accommodate business meetings, for example. Weekly concerts will also be featured in the space on Tuesday nights. The first is May 9 when Matt Monta will entertain. Ryan is in charge of booking and is drawing from his contacts built during a decade as a traveling, full time musician. Gina described the vibe as being similar to a house concert.

A few, carefully chosen, new employees have been brought on board for the new venture, but mostly you’ll find the same familiar faces you’ve come to know in Maple Hall. Gina said the crew is mostly the same as in the beginning nearly a year ago and they’ve gotten very efficient. The two businesses will allow them to flow employees from one to the other as demand dictates.

One emphasis of the new space is board games. You’ll notice a strikingly large magnetic scrabble board on the wall in the back. Another will be added and the space in between the two has a chalk board for Pictionary, hangman or other games. They have a table to the rear that holds mentula, chess, backgammon, cards, uno, Bananagram, dice, jenga and more. The first night I spotted to young women trying to figure out how to play scrabble. The couches are set up perfectly for teams to play.

Some pieces of the new venue are not yet in place. Expect a Bill Murray mural to become an object of conversation soon and outdoor seating will be added on the promenade very soon. It should be similar in size and just down the way from the rear seating at Downtown Grill and Brewery. It will feature significant greenery, with a garden theme. Also handy is window service to the bar from the outside patio.

Ryan said they hope to provide a different kind of experience from other bars and from Maple Hall. That’s why the concerts, rather than sports, as mentioned. He describes Maple Hall as lively and loose and a great place to come after a night out. He want’s the Parlor to be “the other side of the pillow.” He hopes the new spot makes a contribution to what’s available in the city.

The Parlor is open for business. Check them out – while you wait for a lane or just as a new, comfortable place to hang out or grab some late night food and drink.