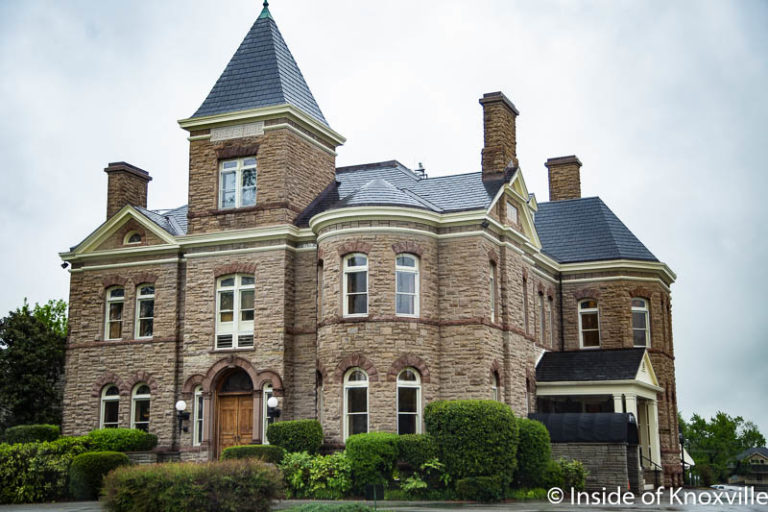 Just about the time I pronounce a favorite, I look at the next set of photographs and remember another house I loved. The Cureton House at 1025 Eleanor, built in 1907 was an incredibly warm and inviting space. The fact that the owner said I didn’t have to take my boots off to walk through endeared her to me forever.

The Queen Anne cottage was purchased by Edmund and Willie Mae Cureton in 1907. He operated a shop on the 500 block of Gay Street selling mostly clothing. In 1919, after its construction, he moved his shop into the Farragut Hotel. They sold the house in 1944 and by 1948 it had been sub-divided into apartments, eventually having as many as four units. The house fell into disrepair, but in 2005 was renovated to return it to a one-family home.

Beautiful rugs are found throughout the home and the old piano just off the front room was a point of conversation due to its unusual wood with its gorgeous grain. Small stained-glass touches added to the beauty of the home, including one small piece in the kitchen used as a cabinet front. The upstairs bedroom included alcoves to serve as reading spots and more, plus enough angles to keep a geometry teacher happy for years.

Since Urban Brother had not seen Greystone Mansion, or the Maj. E.C. Camp House, we stopped in there. Urban Woman and I had seen it on a previous tour. I planned to skip the photographs, but it is so striking, I couldn’t help but take a few. I was particularly taken, this trip with one of the fire places and the imported pink marble and the hand carved devil figures decorating it.

Built in 1889, it was considered stunning at the time. “It was said that the construction of its stone walls alone cost more than any other private residence in Knoxville.” And the stone walls were just the beginning. Major Camp, a former Union officer from Ohio, was appointed U.S. District Attorney for east Tennessee. He invested in real estate and founded the Coal Creek Coal Company in 1868. For a total cost of $125,000, the home includes, “22 different kinds of marble.” Each downstairs room featured a different kind of wood from around the world and each upstairs room featured a different kind of American wood. The furnishings all came from Paris. The five acre estate included a private horse race track.

E.C. successfully passed the home to his son George in 1920, but as coal suffered a decline, George first leased rooms in the house out as apartments and ultimately was forced to sell it in 1945, “for a fraction of what it had originally cost to build.” WATE purchased the home in 1961 for $75,000, but put well over a million dollars into its renovation and restoration.

The Orr-Day House at 926 Luttrell Street, built in 1914, distinguishes itself with a very different architectural look. Joseph Orr, the first owner, occupied the home until 1927 when Thomas and Addie Day purchased it and took up residence. As with so many of the larger homes in the neighborhood, following the second World War, the home was divided into four apartments. Abandoned in 1969, it remained so for fifteen years. Multiple renovations have restored it to a single family home.

I spoke with the owner of this home. I believe she said she’d lived there about seventeen years and when she first moved in, there were people living in the back yard in automobiles. She actually fed them for a while, she told me, but when they began to ask for money for cigarettes and alcohol, she decided it was time they moved, so she had their homes towed. It’s another cozy home with the upstairs bedrooms and the fireplace in the master offering highlights.

The final home in the tour, the John W. Ward House at 821 Luttell Street was built in 1886. As recently as 2005, the home was still sub-divided into three apartments. It is currently vacant and is on the market for $415,000. The floors and fireplaces, which appear to be original, provide the most interest in the home. The kitchen and bathrooms have been recently updated. The biggest surprise is a Hammond organ from (probably) the 1960s sitting in an upstairs room.

I always enjoy the various tours and I hope you enjoyed seeing it through my eyes if you didn’t make it out. Supporting these tours not only is fun and interesting, it’s also often the primary fund-raiser for the neighborhood. Don’t forget you have another opportunity on May 5 and 6 to join the next home tour, the City People Home Tour, featuring homes in the center city.