Fourth and Gill 2017 Tour of Homes, Part One 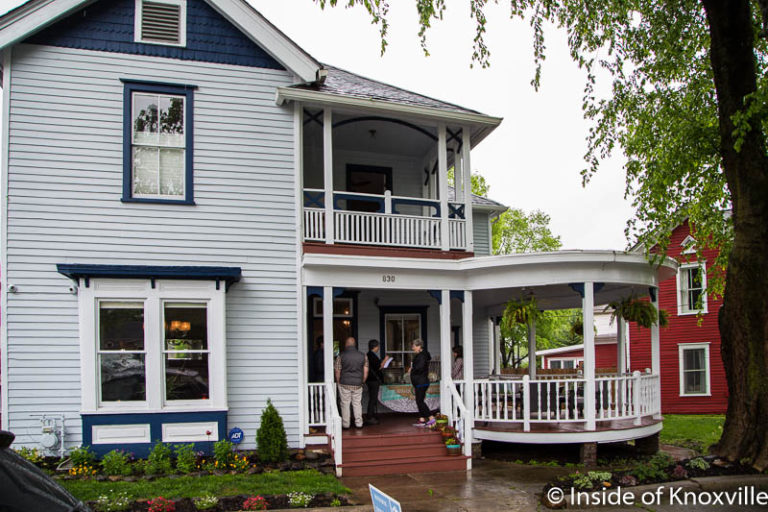 Urban Woman and I are big fans of home tours and we look forward to several each year, including the Fourth and Gill Tour of Homes. Despite the fact the rain refused to relent all weekend long, we were determined to make the tour. Happily this year, Urban Brother, visiting from his new home in Destin, Florida was able to join us for a deeper dive into our city.

The original local suburb, homes began construction in this part of the city around 1880 and continued to around 1915, encompassing a range of styles, from Victorian to Craftsman homes and Bungalow style. The once-grand neighborhood fell onto hard times as the Great Depression gripped the country and suburbs moved farther from the center city. Beginning in the 1970s, it has experienced a resurgence that has led to the neighborhood being a highly sought-after place to live.

Today I’ll look at the beginning of the tour and I’ll finish up tomorrow. The content for these articles has been provided by the tour booklet, which is given to all participants. The photographs are mine, albeit taken in the rain and with a wet camera.

The first stop on the tour was Central United Methodist Church, built in 1927. At the time of its construction, it boasted the biggest auditorium in town. We’d toured it before, so we didn’t this time. The photo above is from a previous tour and you’ll find more information and photographs by following that link.

Next up was the Kirkpatrick-Perkins House, built in 1886. At that time it was a part of the short-lived City of North Knoxville. First owned by widow, Jessie Kirkpatrick, after her death, the home was purchased by James Perkins, a local salesman, and owned by one part of the Perkins family or another from 1888 to 2004. Nelle Perkins, four-years-old when her family moved into the home, remained there until her death eighty-five years later.

The first feature of the home to grab attention is the beautiful front porch with a circular end. This porch also included Amanda Humphreys Pottery and other artists were scattered throughout the tour, which gave it a little extra interest. Beautiful covered fireplaces are found throughout and the kitchen counter is the longest straight counter top I think I have ever seen in a home. The kitchen also featured a very cool table left by the previous owners, as well as recessed bench seating.

I do love beautiful, rich wood stairways and stair rails and this home features a very pretty one. The bedrooms upstairs continued the lovely flow of the home and the couple, who both work from home, share a work space looking out the upstairs balcony. One of the prettiest fire places is in the open space at the top of the stairs.

The James and Augusta Cole House was built by Charles Wright in 1904 and used as rental until 1917 when it was purchased by the Coles. A druggist operating a pharmacy on Jackson Avenue, James stayed in the home until 1949, though Augusta died (in the house) in 1946. Myrtle Vance, a widow working at Standard Knitting Mills owned and lived in the home from 1962 to 1997. Extensively renovated in 2016 by neighborhood residents Scott Schimmel and Lisa Sorenson and returned to rental status, it is currently occupied by Jeremy Wann of Geo Hair Lab.

The home is small – Jeremy said he thinks it is just under 1,000 square feet – but packs a lot of charm. As much as we love the grand homes, this little home was one of our favorites for the day. A straight shot runs from the door through a living space and into the kitchen. The foyer features a very cool, small built-in table, the living space a very nice fireplace adding to the cozy feel. The kitchen counter-top is an unusual and attractive white with dark streaks and two simple bedrooms extend off to the side.

The final home I’ll show you today, the Lotspeich House, is under re-construction by Bob Whetsel. Originally constructed in 1904 and occupied by the Lotspeich family whose son Roy would become publisher of the Knoxville Journal. The home was sold and divided into three apartments, in addition to the portion inhabited by owner in the 1920s and was then lost to the bank in 1934. A 1980s renovation reduced the divisions to two, making it a duplex. Bob is returning it to a single-family home for the first time in 90 years.

A railed porch runs the full width of the house on the main floor and a smaller porch (my favorite) extends from the upper floor. Many of the original floors remain, but many other original architectural details have been lost, including fireplaces. A roomy breakfast nook extends from the kitchen which features beautiful counter tops and lots of natural light from the numerous windows lining the space. Bedrooms are upstairs and the master bath has a very large, new shower. And check out that great upstairs porch. Upon completion, the house will be placed on the market.

Tomorrow well look at several other homes included on the tour. Stay tuned . . .