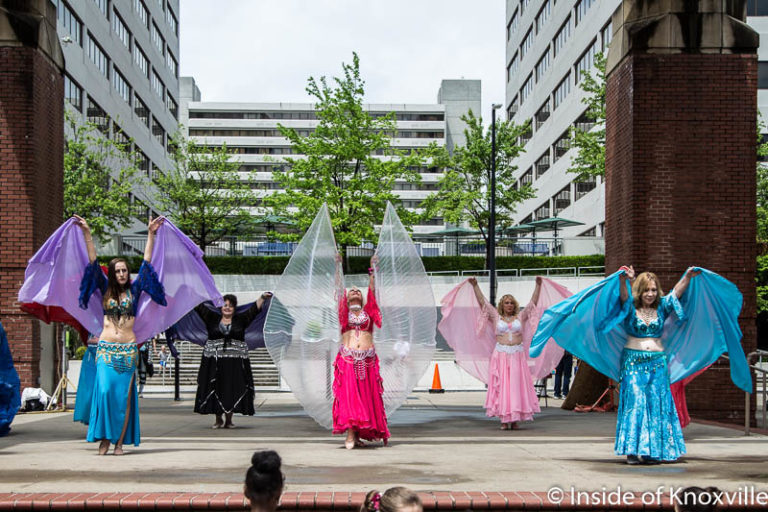 The forecast looked bleak. The history is spotty, at best. We all remember the year the Rossini Festival, sponsored by Knoxville Opera, was washed out by buckets of day-long rain. I slipped out early to watch the dogged preparations, as vendors and planners put on their game-faces and went about the business of getting ready for an even that seemed threatened, at the least.

Spotty, light rain was the story of the early day. Our party agreed it was just a little too much to ignore, but not quite enough to walk home. We watched the children bouncing and riding in circles. We thought parental protectiveness might have gone a bit far when we saw a young girl wearing a helmet while riding a child’s carousel, but soon realized the Epilepsy Foundation was handing out very nice Bell Helmets to any child who asked, which was pretty cool.

As we have in the past, we favored the choral stage a bit more than the others, hearing ReVolution to start our Rossini musical experience. We wandered the length of the festival, stopping for Urban Brother to snag a very cool wrist band made of recycled leather from belts. One of my favorite elements of the experience through the day was seeing artisans doing their thing live. Liz measured his arm, cut a length of leather and made his bracelet while we watched. Later I saw a blacksmith patiently showing a young man how to do the work. Good stuff.

We enjoyed talking with the fellow who made the cool lights inside Mason Jars with Wright Mason, Co., located here in Knoxville. I enjoyed talking with the couple from Oniero Ceramics n Skin. The food, as always, smelled great and we enjoyed mezzo soprano Elizabeth Peterson from the Opera Stage while we took shelter under the Tennessee Theatre awning. Later, walking back through we listened to soprano Kathryn Frady and Urban Brother pointed out there was something poetic about listening to Opera in the rain.

Just a bit after that, the rain began to fall a bit harder and we decided it was a good time to take a lunch break back at the house. This was definitely one of the festivals that illustrates how nice it is to own a home downtown. We could take shelter, dry off, regroup while watching the radar and then take another foray. Just a bit afternoon the weather cleared and we resumed the fun.

The young dancers from Broadway Academy of Performing Arts were precious, if lacking in focus. It’s what makes them so cute, I think. We enjoyed the older dancers from there and, as always, enjoyed the Sandsation Dancers. Urban Brother had never seen them and loved that they come in all shapes, sizes and ages. What Sandy does with the group and what the women do is really quite beautiful.

After listening a bit to the Maryville College Choir, we took a final swing through the festival, particularly fascinated by the 55 gallon drum  heads made into various forms of art. I also loved the Patricia Frankum hats. We watched a bit of the medieval sword fighting before settling in front of the instrumental stage and enjoying the Pellissippi State Community College Brass Ensemble.

We made it to the other end of the festival in time to hear the entire set by crowd (and my) favorites, the Knoxville Gay Men’s Chorus. By then it was about 4:00 PM and the radar was looking ominous. We sort of felt like we’d seen what we wanted to see, in any case, so we headed home. I didn’t hear until Sunday that the festival had closed at 6:30, three-and-a-half hours early due to the weather and the destruction to several tents. It was probably for the best. The weather really never got better.

Despite the weather-related obstacles, we had a great time at the festival. It’s a rare opportunity to hear a range of music not typically performed on the street. There are so many talented musicians – a thousand were scheduled to perform – and it’s great to give them a showcase. We’ll look forward to next year and start early hoping for pretty skies.