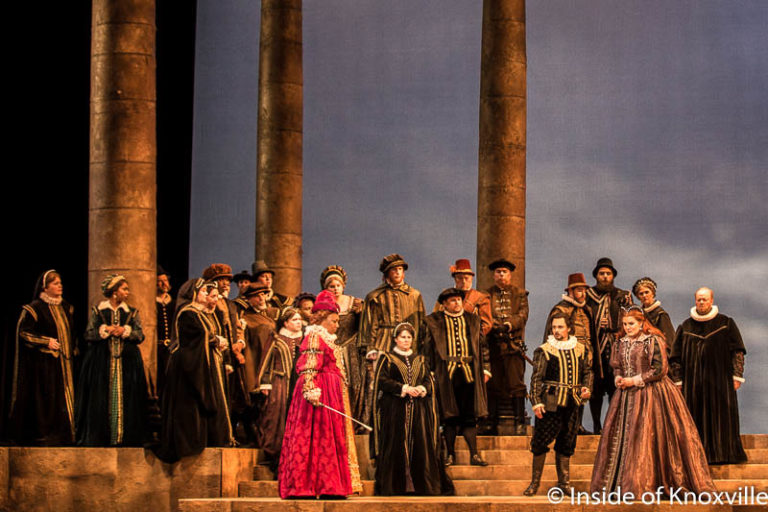 Knoxville Opera‘s latest production, “Mary, Queen of Scots,” (originally produced in 1835 as Maria Stuarda) by  Gaetano Donizetti continues the opera  company’s presentation of excellent productions in the city. As I’ve said before, I’m no opera critic, but I’ve now seen quite a number of productions and this one hits some very good notes.

The vocal gymnastics alone required, particularly of those playing the roles of Mary, Elizabeth and Leicester are enough to leave an impression, but I found the beauty of some of the solos, duets and choral selections to be delicately beautiful. The musical prayer sequence in the final act with the mourners praying for God’s mercy as a cross hovers above would be moving in any language.

The sets, which travel with the productions always serve well and are often beautiful, but the simple sets used for this production – a cross or a royal coat of arms hovering over the stage – worked so much the better because of the opulence of the Tennessee Theatre itself. What better back drop than the Tennessee for a royal setting? It felt like being inside the castle. In that way, the production served as a reminder of what we always have.

The lead role of Mary, Queen of Scots, or Mary Stuart, is played by Rochelle Bard, whose appearance is sponsored by Dr. Sharon Lord. Originally from Massachusetts, she has performed internationally from Korea to France and Italy, as well as with numerous opera companies and orchestras across the country. Knoxville Opera fans may recognize her from Norma and Il Trovatore.

Queen Elizabeth I is performed by Catherine Daniel from Edmonton, Albert, Canada, whose appearance is sponsored by Margaret Goodman. She has credited performances with orchestras and opera companies in Canada and Europe. David Guzman (as Leicester), sponsored by Dr. and Mrs. G. Mark Cramolini, has performed in his native Columbia and in Paris, as well as with numerous U.S. companies.

Darren Stokes (Talbot) is from Flint, Michigan and has performed in Europe, Mexico and across the U.S. Scott Bearden (Cecil), sponsored by Mark and Catherine Hill and originally from Flint, Michigan has also performed both nationally and internationally and has made five previous appearances with Knoxville Opera. Linda Barrett (Anna), a Knoxville native, is making her second appearance with Knoxville Opera and has performed both here and in San Francisco.

The plot will be familiar to anyone who has paid attention to Royal history from the era via any number of literary or film works. The opening scene has Queen Elizabeth I considering, then accepting a marriage proposal from the Dauphin of France. The tension of the opera, however, rests between Elizabeth and her cousin and chief rival for the throne, Mary, Queen of Scots, whom Elizabeth has exiled.

Throughout the opera, Elizabeth struggles with the fate of Mary, fearing both having her alive and having her put to death as she is much loved where Elizabeth is much feared. A fierce confrontation between the two sets the direction of the second act (the opera can be performed as two or three acts) toward a predictable, and not pleasant, end for Mary. There’s a reason it’s called a tragedy: there will be no happy ending.

It’s another powerful offering by director Brian Salesky, Knoxville Opera, members of the Knoxville Symphony Orchestra and stage director, Brian Deedrick. Each of the performances will feature an opera preview hosted by Maestro Salesky 45 minutes prior to the beginning of the production. The opera is performed in Italian, with English translations projected above the stage. You’ll find tickets here.

This is, of course, also the weekend we celebrate the Dogwood Arts Festival on Market Square (and an extensive surrounding area). I think of it as the grand finale of the festival season, though we have some others to follow. After this weekend festivals give way to the Market Square Farmers’ Market and our normal downtown summer routine. The festival starts today and runs through Sunday. I’ll be there as much as possible as it’s one of our family’s favorites.

I’ll also have founders John and Amelia Peterson, plus Bryan Terrill of River and Rail Theatre Company talking about the company’s upcoming production of “Every Brilliant Thing.” Listen in on WUTK, 90.3, or stream it live at http:www.wutkradio.com. It should be an interesting hour. Finally, I’ll have many more photographs from the beautiful production of “Mary, Queen of Scots,” on the Inside of Knoxville Facebook page, so watch for that.