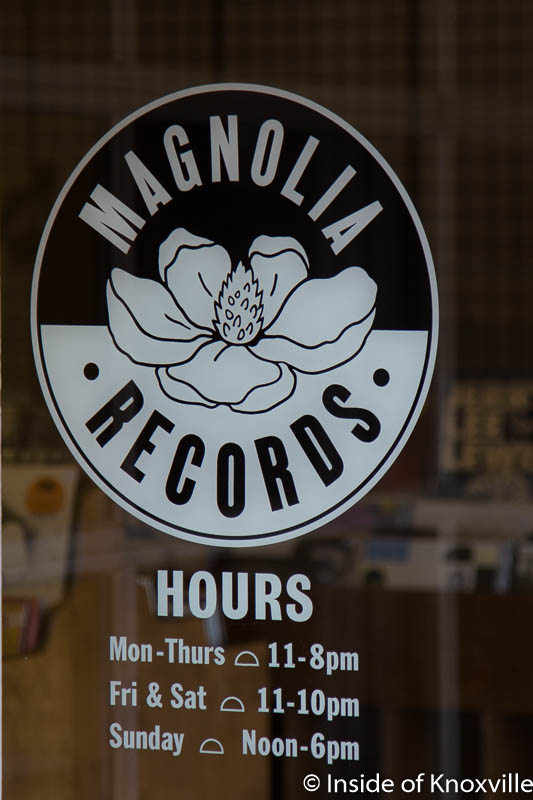 It’s a headline that would have been confounding just a few years ago. CD sales obliterated vinyl in the 1980s and predictions held vinyl would become the eight-track tape of its generation. At that same time, announcements of new businesses of any sort on Magnolia Avenue were hard to come by. It’s a different era. Downtown development has firmly caught onto the near end of Magnolia and vinyl, never really gone, is firmly back and is outselling CDs by a large margin. Magnolia Records at 214 W. Magnolia is a testament to the fact that things once changed, have changed again.

Carey Balch, co-owner of the new business, along with Steve Green and Paxton Sellers, understands the appeal. He’s divested himself of much of his collection – some of it to help open this business – but he’s pretty happy to have several hours every day to hang out and play albums. He works each day from 11:00 AM to 3:00 PM before exiting to do parenting duties or focus on his other job in a nearby recording studio. All of the owners have other jobs.

Fans can wax eloquent about the experience of listening to vinyl, with larger format graphics on the covers, lyric sheets often included inside or on the back and the pop of dropping the needle on into the groove as anticipation for great music rises. There’s no denying the sound is warmer and the dynamic range greater. There’s even pleasure at popping the cellophane wrapper if it’s a new copy.

The three, as well as their current employees, all worked at Disc Exchange and Carey pointed out how many great lessons they learned while working there. The fact that Disc Exchange closed last year after over twenty-five years might make a reasonable person ask if this is a viable business. That said, Knoxville has more record stores now than it had in 1982 when I arrived. Carey pointed out that their models include successful stores with much smaller footprints, such as Reckless Records in Chicago, Harvest Records in Asheville and Landlocked in Bloomington, which have enjoyed sustained success throughout the ups and downs of vinyl.

In addition to their small size, the shops also share the common trait that they focus on hard-to-find genres with passionate followings. From jazz to heavy metal, some genres aren’t as readily available. A formula including genre specific high quality recordings in excellent condition increases the likelihood of success in a small shop. Magnolia Records will also focus on re-issues, imports and smaller labels. They’ll feature soul and punk releases and re-issues and, for example, recently received a shipment of afrobeat/funk reissues from Austria.

While they are certainly open to purchases of used vinyl from local collectors if it fits their ethos, they’ll primarily source elsewhere. They are developing relationships with specialty labels and expanding their access to the kind of material they want to offer, with a focus on quality and not necessarily a large inventory. To that end, they have sources available for ordering particular releases which may not be easy to find. Have a particular obscure jazz title you want to own on vinyl? They may be able to help.

That’s not to say they want have some more mainstream musical choices. They just got in a large collection of country music, for example. They also stock CDs and will expand that collection a bit, though Carey pointed out that vinyl now outsells CDs by roughly a 7:3 ratio. Still, he thinks CDs as a functional platform will continue to exist and be used.

The shop got a great response during their brief opening during Big Ears, far exceeding expectations. They opened officially this week and are pleased by the initial traffic. They also currently have tshirts and foot pedals for guitars by local company Hologram, but they’ll soon add guitar strings, drum sticks, straps and other basic equipment for musicians.  They’ll also soon have pedals by Earthquaker. It’s helpful, because with the departure of the Parlor/Morelock Music and Hot Horse Records from downtown, these items haven’t been readily available to the massive numbers of working musicians who live here or pass through. Oh, and just to be perfectly cool, they’ll also sell Three Bears Coffee beans.

They are proud of their knowledgeable staff. Each of them bring a little something different to the shop and they would love to help you find just what you are looking for. It’s part of the legacy of good record stores and of the very best of the Disc Exchange that they hope to pay forward to the customers at their new shop. Check them out. Hours are Monday through Thursday, 11:00 AM to 8:00 PM, Friday and Saturday 11:00 AM to 10:00 PM and Sunday Noon to 6:00 PM.