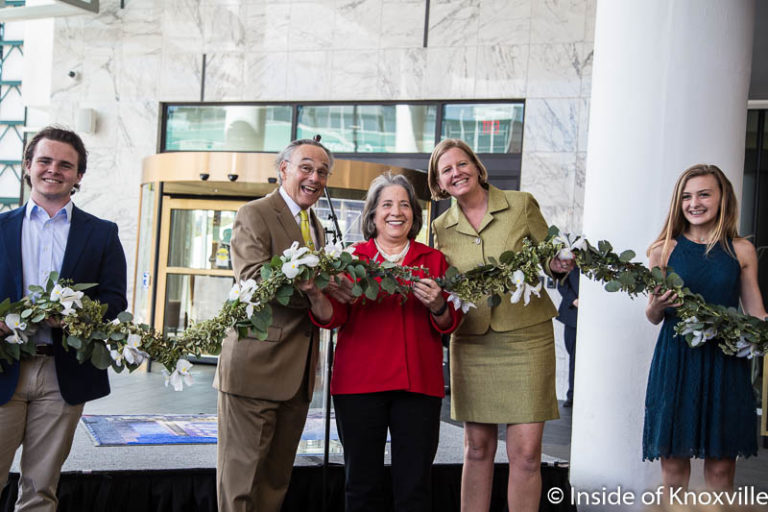 In its soft opening last weekend, Nicholas Cazana, president of the company which owns the property, said The Tennessean Hotel was filled to capacity giving his new staff a good sample of what they anticipate will be a very successful launch. The occasion was a ribbon cutting by Cazana, Mayor Rogero and Visit Knoxville’s Kim Bumpas, and the event was attended my many local officials and dignitaries.

Cazana assured the crowd that reservations already on the books indicated the start would be a strong one. Rates on the website are currently listed as a $179 “limited time only,” price with normal rates expected to be in the low-to-mid $200 range. He and the other speakers touted the proximity to downtown, the convention center, with which the hotel shares a covered walkway, the World’s Fair Park and the University of Tennessee.

The hotel was designed by McCarty Holsaple McCarty and includes 82 rooms in addition to the building’s twelve upper-floor residences. It includes amenities such as valet parking, room service, meeting space, a fitness center and its own lounge. It is internally connected to the Holiday Inn with its full service Windows on the Park restaurant. Kim Bumpas, Executive Director of Visit Knoxville pointed out that the hotel fills a niche that should draw both leisure and business travelers.

A tour of the new hotel followed the ribbon cutting and elegance was on display at every turn from the lobby to the governor’s suite. Attractive art and a river theme run throughout with the custom-made rugs featuring river designs and wall hangings in every room which feature a different section of the Tennessee River. A river collage made of the spines of a massive wall of books offers a striking feature of the lobby.

The hotel employs sixty people who, according to Cazana, “speak thirteen different languages.” He’s been able to assemble a staff without pulling heavily from other local hotels, as well, saying only three employees came from other area properties. Twenty-two moved to Knoxville for the opportunity to work at the hotel. Much of the woodwork and finishes were completed by local or regional companies.

It represents quite a swing from a increasingly blighted building just a few years ago which was owned by the state and housed a handful of state employees and generated no revenue for the city to a major downtown employer and a business which will pay significant taxes. Mayor Rogero credited Governor Haslam for his willingness to turn the property over to the city.

The tour included the Drawing Room lounge which is open not only to customers and residents, but to the general public. It featured the same sleek design and large windows as the rest of the hotel, with comfortable soft seating areas centered with formally appointed tables. A large conference room with an emphasis on technology is available, as is a fitness room featuring a number of machines and free weights with views looking across to the YMCA where a row of treadmills faces back. Perhaps a fitness competition will ensue.

The Governor’s Suite was also opened to those on the tour. It opens into a small foyer which was adorned with a large floral arrangement. More resembling a luxury apartment, it boasts two bedrooms and two baths, a large formal dining room and an oversized living area, all with views of the World’s Fair Park, Neyland Stadium and the Sunsphere. Its small kitchen features a service entrance so that food can be delivered directly to the kitchen and straight through to the dining room.

It’s a remarkable transformation in a relatively short amount of time, showing how quickly projects can potentially be completed. Johnson and Galyon did the construction starting roughly a year ago when I first wrote about the development. The photographs in that earlier article provide a pretty incredible contrast to what you see in this article. They are open for business and reservations are available directly on the website.