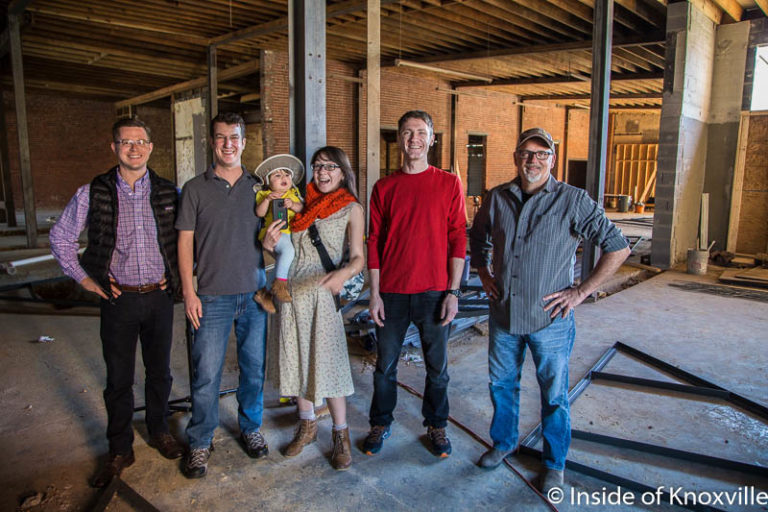 The Rentals Rentals Building at 745 North Broadway will become Elkmont Exchange Brewery and Eating House. A team including Brewmaster Alex Violette and Executive Chef Ryan Davenport hope to open their doors on the new business in late 2017. Life-long friends and native Knoxvillians, they love the region, natural beauty and culture of the area. Most recently partnered in Pasteur Street, Vietnam’s first American style craft brewery. After Violette started the brewing company in 2014, he was joined by Davenport in 2015.

Alex has a biochemistry degree from Maryville College and, after college he worked at Smoky Mountain Brewery before moving to Boulder, Colorado to work for Upslope where he eventually became Head Brewer overseeing production of 100 beers, including five medal winners. Ryan received his culinary education at Johnson and Wales in Charlotte, North Carolina, focusing on Food Service Management. He subsequently worked the kitchen at Magnolia’s in Charleston where he, “learned to value the importance of sourcing locally and making a commitment to sustainability. He became Sous Chef at Nashville’s Flyte before moving to Ho Chi Minh City to join Alex at Pasteur.

While at Pasteur Street, the pair won accolades from Forbes, Travel and Leisure, CNN and many others. They built the unique brewery and restaurant in part out of an ethic that every dish and every beer had to include some element of Vietnamese culinary sensibility. The nature of the local economy also forced them to make everything from basic elements. Items we take for granted – like butter – were not available and  had to be made. It forced them to focus in depth on the relationship between the beer and food and they bring that focus to the new business.

The business is located in a central spot to much of the new development moving northward from downtown and is about a ten minute bike ride from the heart of downtown, while located on the edge of both North Knoxville and Fourth and Gill. With the skyline clearly visible from the building, they are at once virtually in its shadow and simultaneously in a unique and up-and-coming area of north Knoxville. Surrounded by successful newer businesses like Crafty Bastard just around the corner, Holly’s Corner and Magpies just yards from their doors and Hops and Hollers, Remedy and Makers Donuts nearby, the area has already undergone significant development.

The building includes two parts: An older, brick building appears to have been built in the early decades of the last century – exact dates are unclear – and a nondescript concrete block addition was built in the 1960s. The two are now joined internally. The city awarded a $75,000 facade grant to allow them to clean and refurbish the brick portion, but a significant re-design of the concrete block facade promises to provide an aesthetically interesting design for those passing by. Joe Fox noted that the city had been very helpful through the grant process.

The entrance to the new restaurant and brewery will be face away from Broadway with a large patio and parking to the rear. The front entrance is so close to the fast traffic on Broadway, the owners felt it would be too risky to have customers coming and going from that side. Parters Violette and Davenport, are joined by an investment group including childhood friend Joe Fox, plus Segal Drummond, Mike Mangione and Tyler Fogarty of SMJT Property Holdings, which also owns the building. Architectural design is by McCarty Holsaple McCarty and construction is guided by partner Brett Honeycutt. Behany Lovato is Brand Manager.

The building was purchased last April with the concept in mind. Joe Fox, Violette and Davenport had been discussing the idea for sometime and searching for suitable buildings. Violette’s child was born in Vietnam and both partners decided it was time to come home. The 10,000 square foot property will allow them to explore various design options. One side of the building will contain the brewery and the other the restaurant, with patrons given a view of the brewing process. A small tasting room may be added and the two enterprises will share a common entrance.

While both the concept for the beer and the cuisine are still evolving, Alex says the beer will balance “experimental and accessible,” recipes, while Ryan says he will emphasize small plates with an “upscale influence.” He’s currently working at Emilia and he says the food will focus on complimenting and pairing well with the beer offered. The partners will develop their separate crafts collaboratively offering a unique culinary experience to patrons. Liquor and wine will also be available. The beer brewed by Elkmont will be for use in the restaurant, though Violette noted that should production exceed what they needed, there could come a time it would be offered at other local establishments, but he made it clear that is not the goal.

The next months should be exciting to see the external transformation of the building, while the interior is already on its way. You can get email updates on the progress by subscribing on the website or follow them on Facebook. This would be a great time to give them a “like,” and to join them on their journey.