A New Building Designed for 107 Commerce 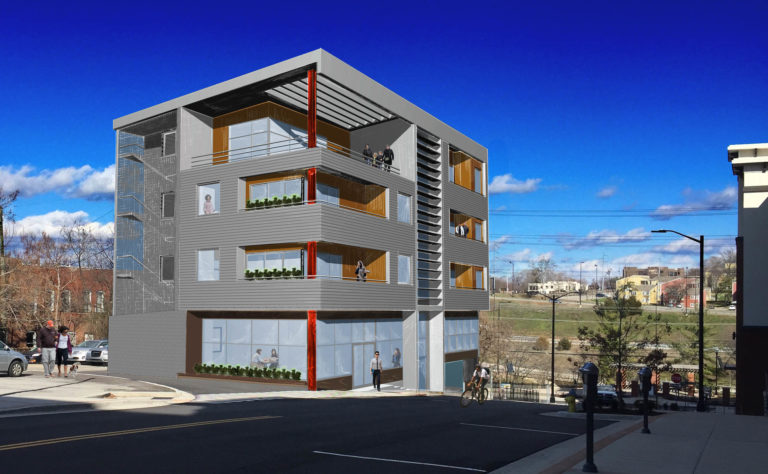 It’s hard to believe it’s been over two years since I first mentioned a small parking lot purchased by Kevin and Melinda Grimac. Not really looking to make the purchase, the opportunity presented itself at 107 Commerce Street and the couple couldn’t resist. The proximity to the (then under construction) Marble Alley Lofts made the possibility of additional residences and/or commercial space more appealing. The couple has been investing in downtown properties since 1993 and currently own properties around the city, including the Arcade Building (home to Knoxville Office Suites) while Melinda, as a realtor with Sotheby’s International Realty also lists properties for sale in the city. The couple also leases an apartment above Sugar Mama’s (135 South Gay), which will come available in July.

In the two years which have passed, Marble Alley (phase 1) has been completed and is largely full and downtown continues to expand at a rapid pace. During that time the Daniel has opened in the Old City, Regas Square has pre-sold many of their units and broken ground. In short, this isn’t the same downtown it was even a couple of years ago. And the demand for housing doesn’t seem to be diminished.

When approaching the building, Melinda said she wanted it to check off all the items her clients generally desire, but have difficulty finding in one spot. These include large windows, a private outdoor space, high ceilings, dedicated, nearby parking and storage. The building will have all these amenities, plus gas appliances and energy star units.

Originally conceived as a three story building, the most recent design calls for four floors. The first floor will have two commercial spaces of 1,380 square feet each, with 14 foot ceilings. The second and third floors consist of two units on each level with 150 square ft. private decks for each unit. The top, fourth floor, will consist of one penthouse unit with 2200 square feet indoors and four balconies, facing in different directions and including a total of 700 square feet. This unit also has fourteen foot ceilings and interesting views in every direction. The balconies, as you’ll notice, do not extend from the building.

I asked Forrest Kirkpatrick of ForK Design, lead architect and designer for the project to comment on the project and he offered an insightful look at the decisions he and the Grimacs made with the design. He said, “The design criteria concern method over style—how do we achieve the greatest result on a small site?  The first step was to maximize parking, placed in the city block’s interior.  This located the building on the Commerce Street lot line, engaging and enhancing the streetscape.  Second was to place the vertical circulation core in the center of the main facade, allowing the building to be zoned into easily accessed units.
“The design is conceptualized as a limestone block; where it is cut into for private space realizes a warmer tone.  This creates covered entries at the street level and porches above, eliminating extended balconies.  By balancing the programmatic needs of the development with the realities of downtown living, energy concerns, zoning ordinances, and building codes, we have arrived at a building design that is dense and carefully arranged; basically a Rubik’s Cube.
“This infill project is a contemporary take on downtown development.  The 0.15 acre site is maximized by building to the lot lines on three sides; parking is on the back half of the lot.  To this end, the program items are densely arranged.  The architecture is a response to our local climate: covered porches, sun shading, sloped roof, expansive operable windows for natural light, fiber cement rainscreen siding, spacious sidewalks, incorporated landscape on the facade and porches, etc.  In addition to the rainscreen and overhangs, the roof and siding are reflective surfaces to keep the building cool.”
To those ends, the building compliments the streetscape begun with Marble Alley Lofts. The wide sidewalks lead to the Downtown Dog Park and through to the Old City via a quieter route than Summit Hill. Entrances to the units, the commercial spaces and the parking are off Commerce Street. It’s a quieter part of the city, yet it’s in the centrally located to the Old City and Gay Street. Melinda also added that the spaces are flexible and, for example, if a commercial client wanted two floors, there could be adjustments to the design to meet those needs.
The units are available for pre-sale and early buyers may have input on finishes. The commercial space will be leased. Mallia Engineering will handle the structural engineering and bids are out for construction. MPC has approved the design. If you are interested in the commercial space or a residential unit, text or call Melinda at (865)356-4178.