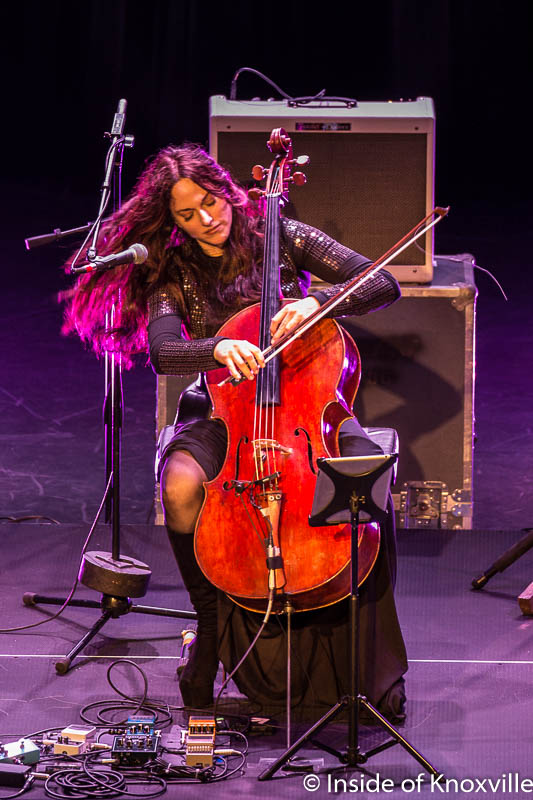 We wait for this festival for so long, it’s kind of hard to believe when it passes the halfway mark and we know it’s fading. Fatigue assures us that it has, indeed, been a solid two first days. Looking at the artists, taking stock of my deteriorating energy and considering that sitting comfortably would be a nice shift for the day, I chose to spend the day on the south side, alternating shows between the Bijou, Tennessee and Church Street United Methodist Church.

I started my day at 2:00 PM at the Tennessee for Xiu Xiu’s performance of, “the Music of Twin Peaks.” I’ve never watched an episode of Twin Peaks and I’d never heard Xiu Xiu before this festival, so I may have been a bit out of my element. The bio for the band mentioned pop and acoustic music. It was absent in this performance, though the clip also mentioned “noise and industrial pummeling,” and called their take on the Twin Peaks soundtrack, “goth pop.” This performance received easily the most divided response of any I discussed with others in attendance. Seeming loved or hated, it wasn’t my cup of tea, but the good news with Big Ears is the incredible range, so I moved on.

The Theo Beckmann Quintet, perfectly placed at the intimate Bijou, delivered a delicate and moving set that had the audience enthralled from the beginning. Beckmann’s widely noted vocal abilities were on full display in a warm show featuring a range of material. The German-born, New York City resident seemed to share the appreciation of the audience and enjoy his performance, as he smoothly sailed from incredible high notes to the lower end of the register as his excellent quintet cooked up an ambient base from which he worked. This became another high point for me.

Church Street United Methodist Church is one of the most beautiful venues in a city that has more than its share of said venues. While it certainly works for a range of musical genres – I wrote about Doc Severinsen’s excellent performance there several years ago – it is, of course, perfectly suited for meditative works. The Crossing, a widely praised choral ensemble from Philadelphia, presented a blend of music by Ted Hearne and David Lang. Beginning with Hearne’s, “Ripple,” based on an incident in which a U.S. Marine shot and killed a mother and father and severely injured their children because he could not see through the glare of the sun’s reflection on their windshield as they approached a check point, the work was as powerful as might be expected.

The featured David Lang work was his 2008 composition, “The Little Match Girl,” based on the Hans Christian Anderson book of the same name, but incorporating a number of additional components. It won the Pulitzer Prize for music in the year of its release. Flowing perfectly with the Hearne music, the program was spell-binding. Again I was struck by how many people sat and listened to a quiet, contemplative and lengthy program. It’s a stark contrast to the social-media-driven, attention deficit infused world most of us inhabit daily. Hats off to Big Ears, the excellent musicians and an attentive crowd for making moments like this one happen.

To say that the next performance I attended reflected a shift in tone is to do a disservice to both the words, “shift” and “tone.” Maya Beiser, joined by Gyan Riley and Glenn Kotche, exploded from the first notes of the show to the last. While quieter moments found their way into the mix, the set was dominated by hard-driving renditions of classic rock songs led by Ms. Beiser’s cello, but powerfully augmented by her backing musicians, stars on their own. Covers ranged from Led Zepplin and Jimi Hendrix to ACDC, Nivana and Howlin’ Wolf. At the center of the exploding musical universe sat Ms. Beiser, looking almost bemused at times at the reaction. Absolutely a phenomenal show, this one will have people reminiscing for a long time.

As much as I repeated venues on this day, the theme had to be range: from explosive to delicate and back again, from complex to whimsical, the day continued to surprise. Magnetic Fields’ performance of frontman Stephen Merritt’s, “Fifty Song Memoir, Part One,” bore little relation to anything else I witnessed at Big Ears other than the common thread of creativity and experimental exploration. Musically not unlike a one-man Broadway show, Merritt sat on a stool in the middle of a set reminiscent of PeeWee’s playhouse and sang a biographical song for each of his fifty years (twenty-five in this performance and twenty-five in a performance the following day. The result, honestly, was mesmerizing for two hours. His sardonic wit carried the night, under-girded by the excellent musical explorations of his band mates.

I ended my Saturday night with what may have been my favorite experience of the festival. I mentioned earlier how much I enjoyed the melding of film and music in the Friday afternoon Jem Cohen curated show at the Bijou. Some of the same musicians assembled in the parking lot between Mast General Store and Chivo Taqueria. Located below street-level, the performance that ensued quickly drew a crowed standing along Gay Street with several hundred drifting down the steps to the parking lot.

While playing improvised music, black and white footage of urban scenes and skylines, fireworks and more played on two spots on the side of the Century Building. The rough texture of the building added to the effect. The early spring evening was perfect and the music moved and breathed to match the footage. Matana Robert’s saxophone set a plaintive tone, Xylouris White did their amazing work and Knoxville felt like an international city. I called it a night and went home early. It felt like the right moment to conclude the day.

Sunday found me winding down. I started my Big Ears day with the Knoxville Symphony Orchestra at the Mill and Mine as they presented Bach’s, “Air on the G String,” and works by John Adams and Matthew Aucoin. Aucoin, friends with conductor Aram Demirjian, was present for the performance. The crowd sat silently, locked into the performance, and responded with great appreciation for each piece. The orchestra members seemed happy to play in a different venue and the performance proved a perfect way to launch a Big Ears day. Again, local musicians did our city proud. I hope the audience included some members from out of town.

After taking a break, I returned to the north end of downtown and stayed there for the remainder of the day. I saw a fine set by Nils Økland, from Norway, and Mats Eilertsen at the Standard before returning to the Mill and Mine for a performance by Rangda. The Rangda performance easily became one of my favorites (among many, I realize) of the festival. Veering close to surf-rock, then slipping into psychedelic jams, repeating guitar hooks to the point of breaking before slipping into a hard driving groove, the group rocked the house. An absolutely great performance with little more involved than three very talented musicians doing their thing.

I returned to the Standard for a performance by French musician Cecile Schott, known professionally as Colleen. Primarily playing the treble viola da gamba, which she exclusively plucked, she also sang and played loops and samples. The music is delicate and entrancing and many seemed to enjoy it.

That effectively ended my Big Ears experience. I stopped in to see Jeremy Gara and quickly determined my fatigue to be greater than my interest in this particular performance of electronic sounds. I’ve learned that I need a connection with the artists and have a hard time feeling that when I see their head bent over electronics for long stretches.

I had a great conversation outside the venue, with an evolving group of friends, as well as a couple who currently live in California, but are interested in having a place in Knoxville. As I walked home I was stopped by more friends and felt a deep satisfaction at the entire four-day experience, from the world showing up at our doorstep to the quiet moments with friends at the end.

A few final notes are needed: No person can cover everything at Big Ears and there is a good likelihood that I missed portions I would have loved. I know I would have enjoyed the readings of “Suttree,” and the Trolley tours, as well as the local music and some of the other experiences sprinkled throughout. I always wish I could see more of the films. I fully intended to enjoy some of the secret shows, but missed those entirely. I’m sure they were great.

Still, I did see, by my best count, 25 performances over about 33 hours of concert time. It’s an incredible array of talent along an amazing journey. And it went almost perfectly. I didn’t like the searches at the venues and the fact that people had to throw away unopened power bars and bottles of water – and I offered one security person $100 if I could bring in my coffee. He didn’t accept, which was good because I was bluffing. But in the larger context, that’s not a major problem.

I did not hear bad sound one time despite the number of performances, venues and the technical difficulty of getting the sound right for such a diverse group of performers. That amazes me. Lighting was excellent at all but a couple of performances where it seemed a bit off. The venues, artists and the city shined. I am so proud and humbled that we host this magical four days. Here’s to many more years of the same, with great thanks to Ashley Capps and AC Entertainment for making it happen.