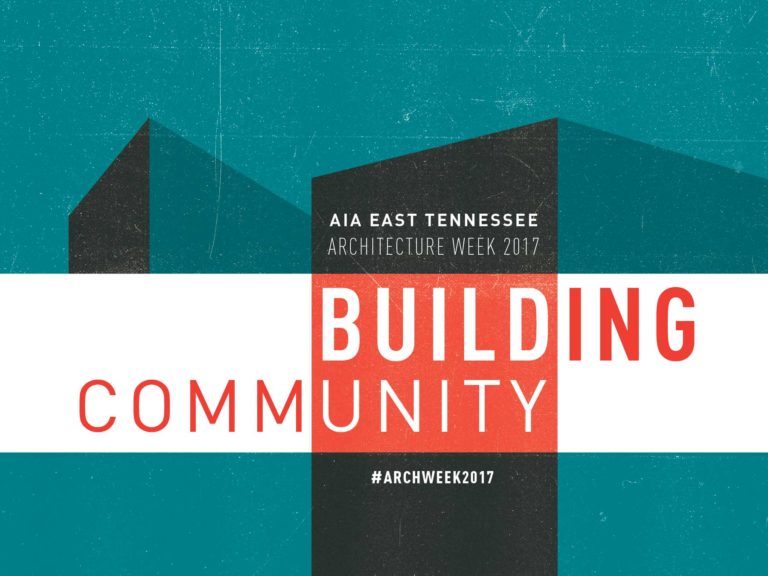 “Building Community” is a phrase I hear from so many people. I hear it from religious people, business owners, neighborhood activists and, now, architects. What does it mean? The precise definition likely changes for each of these groups, but architects actually making the “building” in “building community” a possibility. We’ve talked a lot about “built environment” over the last  6 1/2 years on this blog and for people interested in urban living there isn’t a topic of much greater importance.

Architecture Week actually stretches to nine days this year and is planned annually to coincide roughly with Thomas Jefferson’s birthday (April 13). Not to be confused with the East Tennessee Community Design Center‘s, “HappyHealthySmart Symposium,” which happens to be tonight at the East Tennessee History Center (5:30 PM – 8:00 PM), these events are sponsored by the American Institute of Architects of East Tennessee and begin next Friday, April 7. There’s an event for almost any interest and they promise to be both fun and educational.

That first event, April 7, is a combination of an Art Salon and Behind the Scenes Tour of the Kern’s Bakery Building on Chapman Highway. Held in conjunction with Knox Heritage, the salon is free to everyone, while the tour is free to Knox Heritage members (join if you haven’t, already). I’m told the Kern’s Building has come a long way since last I toured, so I’m sure that will be interesting to many of you. According to Richard Foster, one of the organizers of the event, “The art salon features art from over 25 local architects, designers, engineers, and building industry professionals, including collaborative pieces by Brian Pittman and Amos Oaks. Brian and Amos will have a show featuring the full collection on April 22nd.”

The next day, Saturday April 8, Jack Neely, of the Knoxville History Project, will take a group on one of his interesting walking tours from 9:00 AM to 12:30 PM. This one’s a little different from some of the others, with a beginning point of the Civic Auditorium and Coliseum. Knoxville’s historic theatres and venue spaces will be highlighted, which is a good follow-up to last weekend’s Big Ear’s Festival. Cost is $10 for adults. Children under 12 are free.

Later that same day, at 4:00 PM, Kazuyo Sejima will present, “Environment and Architecture,” at the Bijou Theatre, no doubt one of the theatres to be included in Jack’s walking tour that morning. Ms. Sejima is co-founder of the architectural firm SANAA and, the, “2010 recipient of the prestigious Pritzker Prize for Architecture.” The award is sometimes referred to as the Nobel prize for architecture. This free event is sponsored by the UT College of Architecture and Design. You’ll find more details about the lecture here.

Fast forward to Wednesday, April 12, and you’ll find the fourth annual Design Slam! I can attest to the fun nature of this event, as I helped judge it last year. Teams of local architects or architectural students try to solve a real-life, usually downtown Knoxville-related design issue. The teams enter the evening not knowing the specific problem they will be given to address, so they must start from scratch to solve the problem and then make a convincing presentation in a very short period of time. What could be more fun than that? How about if it was located in a castle which served very good beer? The event will be held at Schulz Brau from 5:30 to 7:30. It’s very fast-paced, creative and open and free to the public.

Another fun event follows on Friday, April 14, from 7:00 PM to 9:00 PM in the Square Room. The Design Symposium: What Makes a Livable City? is similar in style to Pecha Kucha with seven presenters having seven minutes each to answer the question. I attended this event last year, as well, and found it to be very provocative. While there is overlap, it’s interesting to hear the different focus local architects and design professionals bring to the same question. 7X7 is 49 minutes. Can’t go wrong. This event is also free and open to the public.

The final physical event (there are two online events) will be a home tour with a twist. The Mid-Mod Home Tour is self-paced and is a driving tour ranging around the county to focus on some of our best examples of mid-century modern architecture. Just now old enough to be considered historic, it has been the rage, gone out of style and now it is back with a vengeance. Seven homes are on the tour and included is the McCarty house which is being opened to the public for the first time.

Two online events are planned and one is already underway. Are you a pro at Instagram? Then this one’s easy for you. Take a picture of what you see in and around Knoxville. Use the hashtag #iLookUpKnox with your photograph. The contest started March 15 and concludes April 15. Simple, consider your environment, record it, post it with the hashtag and you are entered.

Finally, the public will be encouraged to vote for the Best New Architecture in East Tennessee. I’ve seen previous years’ contestants and selecting the best among them is very difficult. We have some very good and very diverse work being done in the area by talented architects. The online poll for the People’s Choice Award opens April 8 and closes April 21st at 6:00 PM. Awards will be given in both contests at the annual Design Awards Gala on April 21st at the Southern Railway Station.

For further details, an overview of all of the events, and to purchase tickets to any of the ticketed events, click here. I’ll hope to see you out tonight as we start thinking about architecture and at as many of the events listed here as possible. This is fun, but it’s also important. We each need to understand as much about design as possible so that we might demand it going forward. Our future city is being constructed today and our children and grandchildren are depending on us to get it right.