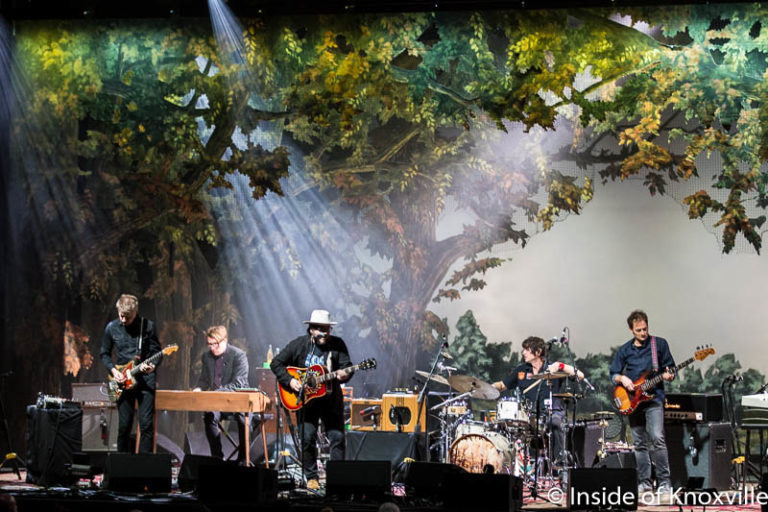 I spoke to someone who didn’t attend Big Ears and felt it was simply too much to imagine and to which she might see an entry point. While I made some suggestions for next year, I can say I attended Big Ears and can relate to the feeling. It’s overwhelming in so many ways. There’s so much to do, so much to absorb, consider and process. The performers and guests come from all over the globe and the genres cover much of those I could name and well beyond. Some of the genres and genre blending can’t really be named.

But then there are intimate moments: small surprises, quiet conversations and simple delights. It’s also a very personal event. No two people have the same tastes, levels of musical sophistication or knowledge. None of us make the same choices as we travel through the four days. Some us look for the most comfortable, some for the most challenging. It makes for a completely different experience for each of us.

The first day is filled with electric anticipation and Ashley Capps, founder of the festival, always hits the right notes from the outset. The opening ceremony Thursday evening featured a student from the Joy of Music School singing an original composition, a performance by the Community School for the Arts Percussion Class led by Nate Barrett, a spoken word performance by Black Atticus and a two-song performance by Nief-Norf. Encapsulating a sample range of what was to come, the audience left the venue abuzz about what would come next.

I had actually made it to Jem Cohen’s, “Benjamin Smoke,” at the Riviera, earlier in the afternoon and found it a moving tribute to the wildly talented who ultimately are limited by their own demons and the world in which they struggle to make art. Focused on Robert Dickerson, better known as “Benjamin,” front man for punk band Smoke, Dickerson died before age forty from complications of HIV. The movie is both a moving tribute to him and to, “Cabbagetown,” the gentrifying section of Atlanta in which he lived. He described it in the film as a place where, “children build go-carts, go to jail early and watch their parents do lots of inhalants.”

After the kick-off, I saw back-to-back performances which would be among the best I would see for the entire festival. Carla Bley joined the Knoxville Jazz Orchestra for a rare performance. The composer and pianist at 80 years old, boasts thirty albums, as well as numerous compositions and accolades. She brought three musicians with her to the performance at the Tennessee. Performing her compositions, the Knoxville Jazz Orchestra played to their usual incredible standards and, judging from reactions left an impression on their guests. The music covered a range of big band jazz and included solos – capably handled by the orchestra members – that left chills with sprays of demanding rapid-fire bursts of notes.

The second of these two stellar performances found me at the Square Room for Matana Roberts. An excellent saxophonist and vocalist, she also utilizes images, looping and electronic sounds in her solo performances. The venue was packed and, as I told her later, I felt a longing for simple straight saxophone and vocals. Instead she built a tapestry through the set with vocalizations, spoken words, singing, images both impressionistic and realistic, electronics and and her incredible saxophone artistry. Easily one of the most powerful and emotionally engaging performances I saw, it accomplished, for me, the goal of Big Ears: It expanded how I experience music.

In a demonstration of either my poor planning or my complete disregard for physical exhaustion, I left the Square Room for the Mill and Mine and a very good show by British composer and performer Anna Meredith. Part rock band, part electronic and part classical, her performance encapsulated the genre-bending experiences offered by the festival.

Wondering what I was thinking when I alternated events on each end of downtown, I trekked to the Bijou for an outstanding performance by My Brightest Diamond. Fronted by vocalist, keyboardist, guitarist and composer Shara Nova, the band also blends rock, synth, classical and more. Her performances are dynamic and the packed crowd at the Bijou responded accordingly. For many, it seemed the most buzz-worthy performance of the day. Local music lovers could not miss the connections between the music of My Brightest Diamond and Hudson K.

I finished the night at around 1:00 AM at the end of a Mill and Mine performance by Blonde Redhead playing with the American Contemporary Music Ensemble. Another international mash-up, the band is comprised of twin Italian brothers, Amedeo and Simone Pace, who grew up in Canada and Japanese-born Kazu Makino. The trio formed the band in New York City over twenty years ago and, for Big Ears, performed their classic 2004 album, “Misery is a Butterfly,” with assistance from ACME. It was a fitting end to a great first day.

The second day, I got marginally better at not trekking from one end of downtown to the other between each show, managing to stay on one end for a couple in a row. I started with Matmos’ noon performance of Robert Ashley’s Perfect Lives (Private Parts) at the Tennessee Theatre. Virtually indescribable if you aren’t familiar with the piece (I wasn’t), it consisted of a driving musical setting underlying a monologue in two parts, the first an existential look into one man’s life and the second a broader vignette of an interaction in a bar with forays far afield. I found it completely mesmerizing.

I started in the early afternoon with a very fine Robyn Hitchcock performance at the Standard. Performing solo, he started with a very powerful, poignant “Chimes of Freedom,” (Bob Dylan) and ended the forty-five minute set with his own, “I Wanna Destroy You,” lamenting to the audience that, sadly, both songs are as relevant today as when they were first written.

I stayed at the Standard (see how I learned from day one?) for a performance by acclaimed flutist Claire Chase. A prodigy, she played flute with the San Diego Symphony starting at age fourteen, and soon pursued her own vision by founding the International Contemporary Ensemble in 2001. With hundreds of compositions to her credit, she drew from a deep repertoire to deliver an enchanting set at The Standard. Playing a range of different sized and shaped flutes, it was the massive, six-foot-tall, contrabass flute which fascinated listeners. Describing it as part flute and part percussion instrument, she compelled surprising sounds from both that and the other flutes in a riveting set.

I’ve found I greatly enjoy improvised live soundtracks to silent film. Jem Cohen, producer of, Benjamin Smoke,” joined some of the festival’s finest musicians including the above-mentioned Matana Roberts and one of my favorites from last year’s festival, Xylouris White among others for a performance of, “Gravity Hill Sound + Image.”Incorporating several short films, including one shot in 1990’s Knoxville, the powerful blending of arts proved to be very emotionally evocative. Despite my keen interest in the Knoxville footage (shot primarily in the area around what is now The International), it was a simple film of a train that packed the most punch, for me. Filmed through a car window, sometimes through rain beaded on the window, the music blended seamlessly to produce another layer of art I found extremely compelling.

I made another trek past the Old City for a performance of Jóhann Johannsson’s, “Drone Mass featuring ACME (they were everywhere) and Theatre of Voices at the Mill and Mine. I’m so glad I made the walk. Based on an excerpt from the Coptic Gospel, the 2015 work proved to be, perhaps, the most beautiful performance of the festival, for me. Reverent, but modern, with electronic drones underlying beautiful string and vocal work, I left impressed that hundreds of people stood throughout the hour-long performance, with very little attrition. Whether considered holy, meditation or simply relaxing, the music transfixed the audience throughout. World class music meets world class listeners, which is what Big Ears is all about.

I ended my Friday Big Ears experience in the Tennessee Theatre with folk artist Michael Hurley followed by a two-hour show by Wilco. Michael Hurley delivered a solid set and the audience responded well but, clearly, the anticipation was for Wilco. I’d heard more than a little discussion and hand-wringing over this particular musical decision: Many of us have seen Wilco before, so should we attend a repeat performance of something we love or spend the two hours exposing ourselves to new music? There isn’t really a bad answer.

The Wilco show was brilliant. Well-paced with the elegant melodies and folkie vocals of band leader Jeff Tweedy interspersed with the electric freak-outs of guitarist Nels Cline, the show never seemed to lag and two hours passed swiftly. With a colorful, beautifully lighted set of a forest, it had great, if simple, visual appeal, as well. This performance, along with mass at the Mill and Mine and the film scores at the Bijou formed my diverse triad of favorite performances for the day.

I’ll follow this with another article covering the final two days of the show and I’ll have the complete package of photographs on the Inside of Knoxville Facebook page as soon as possible.