Road Diets: What Are They? What Does a Good One Look Like? 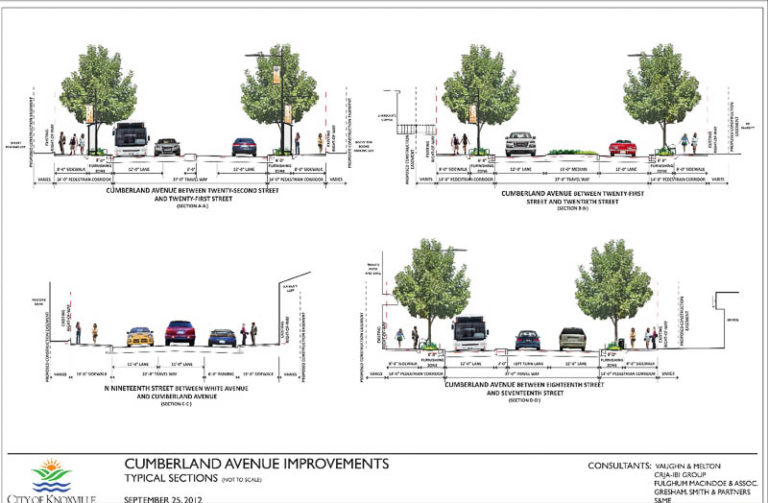 The above video came across my Twitter feed recently and helped me understand road diets in various formats better than I’d ever understood them before. Several points stood out, no matter which of the four designs is under discussion: First, the lane widths are ten feet, which has no impact on travel times or traffic capacity, as opposed to twelve feet, and the reduction is shown to slow traffic (77% in one example) and reduce crashes (63% in the same example.)

Additionally, in every example, bike lanes of some sort are included. The cycle track, particularly caught my attention and, as noted in the video, it’s the one most likely to make non-cyclists cycle again because of the buffer afforded by the parked cars in the example. It was also instructive for me to notice that a single, one-direction bike lane included as a part of the project, though perhaps not a first choice, is still helpful if that is all that the space involved allows.

I also came across an article written by Subha Ranhan Banerjee and Ben Welle on the City Fix website entitled, “Bigger Isn’t Always Better: Narrow Traffic Lanes Make Cities Safer,” which makes the point the title indicates it would make. The site is globally networked, so the data was taken world-wide and you see the conclusions included in the excellent graphic below. To make your job easier, here are the conversion in feet for the four lane widths shown, left to right: #1: 8.5 to 9.1 feet, #2: 9.1 – 10.6 feet, #3: 10.6 – 11.8 feet and #4: 11.8 feet and up. As you can see, their conclusion based on fatalities per 100,000 is that the safest lane width is roughly 9 to 10.5 feet and the worst width for safety is about twelve feet and up. Intuitively, for many of us, this seems illogical. Wider lanes should mean more room for error, fewer crashes and increased traffic capacity. The problems include: The wider the lane, the faster the speeds the cars travel. Wider lanes increase pedestrian risk as they have to travel farther to cross the streets. The authors point out that pedestrians struck by an automobile driving 30 mph have a ninety percent chance of survival. Raise that speed up to 50 mph and the survival chance drops to 15%.

The authors also echo the point from Jeff Speck’s examples above to state that traffic capacity is not reduced and congestion is generally due to traffic lights, not car speed. They note that it takes about 18 seconds longer to drive a kilometer at 30 mph than at 50 mph, which seems like a small sacrifice to ask drivers to make if it increases survival chances for pedestrians in crashes from 15% to 90%. It’s 18 seconds.

All of this put me in mind of our highest profile road diet: Cumberland Avenue. While the area is beyond that which I have included in this space, it really isn’t far from downtown. Perhaps the changes in form will make it seem more unified with downtown, whereas traditionally, the UT area and downtown have been considered separate entities. Years in preparation, the Cumberland Avenue Corridor Plan is much more extensive than a simple re-striping of roads, of course. The project involves moving utilities underground, changing the codes for acceptable construction in an effort to make the strip more urban and less suburban. To that end, parking lots in front of businesses should largely disappear. More height in new construction has already begun to take shape. Sidewalks are being widened and street furniture and trees are being added.

The effort has the intention of making Cumberland feel like more of a destination and less a spot for traveling through. With the amenities added and the wider sidewalks, the stretch should be more appealing to pedestrians. With utilities and street-facing parking lots removed or hidden, the area will have a more upscale feel.

After focusing on the Jeff Speck video above and considering the article below, including the information contained in the graphic, I noticed, however, two obvious issues: There are no accommodations for cyclists and the lanes are twelve feet wide – the most dangerous width according to the articles above. Had the lanes been ten feet, four feet would have been gained. Several more feet would have been required for bike lanes and that footage appears to have gone to wider sidewalks and right-of-way concerns. I was told that given the inadequate footage for bike lanes, the vehicular lanes were made wider with the plan to have bikes and cars share the lanes.

There is no doubt that the Cumberland Avenue area will be safer for pedestrians because there will be fewer lanes. It will be more pleasant for pedestrians because the sidewalks will be wider and the buildings closer, as opposed to being fronted by parking lots. Still, it seems unfortunate that bike lanes could not have been added to an area which probably contains the most potential cyclists in the city. It’s also a concern that vehicular lanes would remain at 12 feet when everything I read suggests that is the least safe width.

You can read more about the plan and follow the progress of its implementation here. It is slated to reach or approach completion by the end of this year.