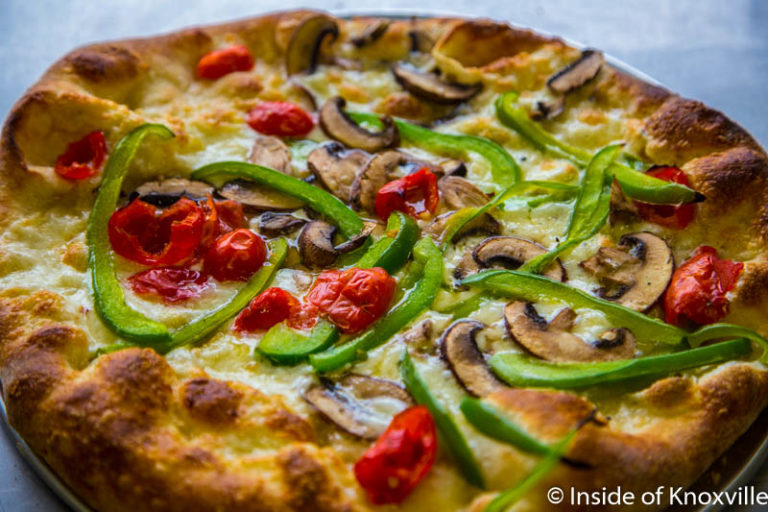 When owner David Blevins closed his North Corner Sandwich Shop a couple of months ago, it was doing well. So well, that he left in its wake some very disappointed and loyal customers. He won the 2015 Top Knox Award from the Knoxville Mercury for “Best Sandwich.” While it’s a bit farther out Central than I’ve gone before, a recent contact from one of those customers convinced me to go about six blocks past Wild Love Bakehouse – the previous distance mark for me out Central – to find out what was up. I learned that David had a plan to go in a different direction.

He’s remaining in the same building – for now – though he said he may look for a larger place somewhere in the north Knoxville area. The concept, however, is completely different. Whereas previously the restaurant built its reputation on great sandwiches and lunchtime-only service, the new place will no longer serve sandwiches, but has shifted to pizza and the hours have shifted to evening.

Pizzeria Nora is named after David’s mother who he says is passionate about food and cooking. It’s where he learned to love the same. But he didn’t set out to build a career in the culinary world. After growing up in Huntsville, Alabama, he attended UT where he studied communications. Even then, however, he put himself through school working in the service industry and, particularly, in restaurants. He worked in sales and other positions, but ultimately answered the culinary call with a degree from Johnson and Wales in Miami in 1998.

He parlayed the culinary background and degree into jobs in many of the places the rest of us would like to live, from Palm Beach to ski resorts including Aspen, Colorado to St. Thomas. He actually spent several years in the Caribbean. After some years of traveling around, he returned to the Tri-cities where his parents have settled, to take stock. He visited Knoxville and decided it offered a great spot to grow his own business.

With very little in the way of a budget, he found the affordable building at 2400 Central and built the space out to suit his needs. He says he’s always been a do-it-yourself kind of guy and he has experience in woodworking. With his shift to pizza-making, he continues to be frugal. He points out that ovens like the ones he’s using for making the pizza cost $20,000 new, but he found two that were used in the Tri-cities area, bought them, arranged to haul the 950 pound gas-fired, stone bake ovens himself. He also repaired them to return them to make them functional, once again.

He says he’s developed a strong following of people who have eaten there on a regular basis and he hopes they’ll return to try his pizza. He’s already opened, though quietly, to see how the new business flows. He’s starting out with 5:30 – 9:30 hours, Tuesday through Saturday, and he says he’ll expand to later hours or lunch hours as demand dictates. Many of his customers come from the Old North neighborhood, but he pointed out his customers include college students all the way to elderly fans.

His emphasis with the food is to keep it simple – just a few pies – and to focus on Italian style pizzas. He has one salad and one dessert. His idea is if you start with good, fresh ingredients – which he says he does – the likelihood of success in making good food is greatly enhanced. The sausage is made in-house and he makes other ingredients himself where possible. He’s made many, many pizzas in the months he’s been closed, working to perfect the dough, the ingredients, the oven temperatures and so on, to make the perfect crust, which is thin, light and airy. Wanting customers to be filled, but not to feel the heaviness some pizzas can leave behind, thin, light and bubble-filled crust is the order of the day.

Widely traveled, he says he enjoys good international food. He travels to New York City – he was listening to WNYC when I stopped in – once a year just to explore the city and its foods. Often visiting little neighborhoods around the city, the small pizza places and out-of the-way restaurants call his name.

I tried a slice of the Dino, Molinari Soppressata with olive oil, tomato sauce, the house-made Italian sausage and mozzarella and found it to be very, very good. I also took a bite of the dessert: Buttermilk Panna Cotta with Fabbri cherries and salty pastachios. It truly is an amazing blend of smooth, good flavors. There are multiple vegetarian pizzas, as well as the aforementioned salad. He currently offers craft sodas with real sugar cane sugar.

He employees two people at the current location and he mentioned that Pierce LaMacchia, one of the owners of K-Brew, was one of his original employees. He’s open for business now, Tuesday though Saturday, so drop in and see what’s up with some excellent new pizza. There will likely be a grand opening soon. In the meantime, express your support by “liking” his new Pizzeria Nora Facebook page. In a measure of the popular support the restaurant enjoys, the Facebook page went up yesterday and already has over 500 “likes.”