Protests and Unrest Continue Nationally and in Knoxville 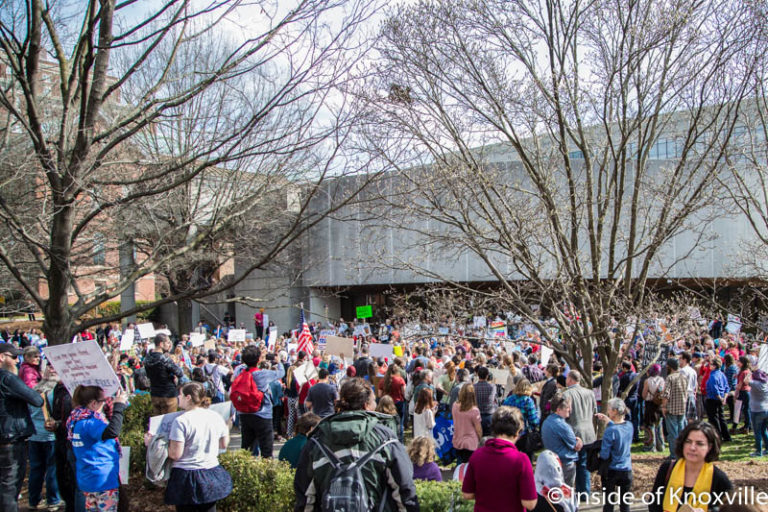 We live in contentious and interesting times. To say that the most of the nation was shocked with the election of Donald Trump as our president, I think is a fair and non-partisan statement. Expectations and polls proved wrong and suddenly our country found itself in uncharted waters. To this point, reactions to subsequent events in the first weeks of the Trump presidency have largely fallen along voting lines, with his supporters seemingly happy and a large segment of the population unhappy with the results.

To put what is happening into some perspective, a look at Knoxville protest history is instructive. I wasn’t here in the 1960s or 1970s to witness protests against the Vietnam War or in support of Civil Rights. I understand quite a kerfuffle  happened around President Nixon’s visit to a Billy Graham crusade at Neyland Stadium.

But I have been around Knoxville since 1982. I’ve been in and around a number of protests over the years in Oak Ridge and Knoxville. Hiroshima Day has gotten some people mobilized over the years in Oak Ridge. Usually numbering in the dozens and reflecting an aging group of activists, those have faded in recent years. I’ve witnessed other protests over the years draw a dozen or two, sometimes fewer than a dozen. An example, I reacted to the large crowds drawn by the early Black Lives Matter marches in late 2014. My best guess at the time was the “massive” crowd numbered around 125.

In the aftermath of the election, initial protests locally produced similar numbers. The Women’s March Knoxville completely obliterated anything I’ve ever seen or heard of in Knoxville. I guessed at the time that at least 3,000 people participated, but evidence suggests perhaps as many as 5,000 were present. Either figure would represent the largest protest in the history of our city (as far as I know) by a factor of several-fold.

Numerous other events and actions have continued the passion. The same weekend as the Women’s March, hundreds attended fundraising efforts (documented in the same article linked above) for the ACLU. An event at Yassin’s Falafel House to support Bridge Refugee Services defied all expectations. Originally scheduled to sell falafels from 6:00 PM to 9:00 PM, the lines continued past midnight, stretching over a city block for several hours.

Specific actions and cabinet appointments have prompted a number of the events. Scott Pruitt’s appointment to head an EPA agency that he has sued in the past prompted one environmental rally, pictured here. The approval of the Dakota Access Pipeline has spurred a continual gathering on Sunday afternoons on Market Square.

As controversial as any of the appointments, the nomination and subsequent approval of Betsy DeVos to head the Department of Education has stirred quite a bit of reaction locally. Hundreds of educators and supporters rallied last week to protest the nomination. Again, this is twice or more the number I’ve ever seen at a protest in our city. And these aren’t seasoned protesters or people typically inclined to put their politics into the public arena.

This particular nomination also seems to have generated reactions in other ways. A few days ago, Senator Bob Corker posted a positive statement about Betsy DeVos and received over 7,000 comments on his Facebook page, the overwhelming majority of which were angry. His typical post gets a couple of hundred reactions and far fewer comments. A Facebook page advocating for his defeat quickly had over 3,000 members.

Facebook has been at the center of much of the local and national protest. The local women’s march site has about 3,700 members. The national equivalent has almost 700,000 members. Love Trumps Hate – Knoxville has over 10,000 members. Other groups, such as Indivisible Knoxville have thousands, as well.

The most recent large march came in response to President Trump’s actions on Immigration. When I learned a rally and march was planned for 12:30 PM last Wednesday, I walked to Market Square expecting a dozen or two participants, given that it fell in the middle of the work day. Again, as in several of the cases noted above, I drastically underestimated the numbers who would respond. Over 1,000 (I counted, as did two others) made a huge circle of silence on Market Square before marching to the City County Building.

A request for a public forum or town hall meeting, which began in response to concerns about the potential revocation of the Affordable Care Act, was rejected in inflammatory terms by Representative Duncan. Saying he didn’t want to give a forum to “kooks,” he continued to play the theme that conservatives have championed, that those who disagree with the current administration’s policies are simply “sore losers.”

So, clearly, east Tennessee citizens who have never been willing to march, are marching. Clearly, there is an impulse locally and nationally on the part of some to change the political order. But realities persist: People hate congress, but re-elect their congressman until the congressman dies. People don’t like the results they get from Washington or Nashville, but  persist in pushing the same buttons in the booth they’ve always pushed because of the letter next to the name. State and national congressional districts have been distorted beyond any reasonable recognition in order to maintain power for the dominant parties.

Whether these spontaneous displays of passion will result in lasting change will be dictated at the voting booth. Until something happens in that regard, all the marching, speeches and fundraising serves as little more than an interesting distraction in what many see as perilous times.

I’ve posted the full collection of about 135 photographs from these various events here.