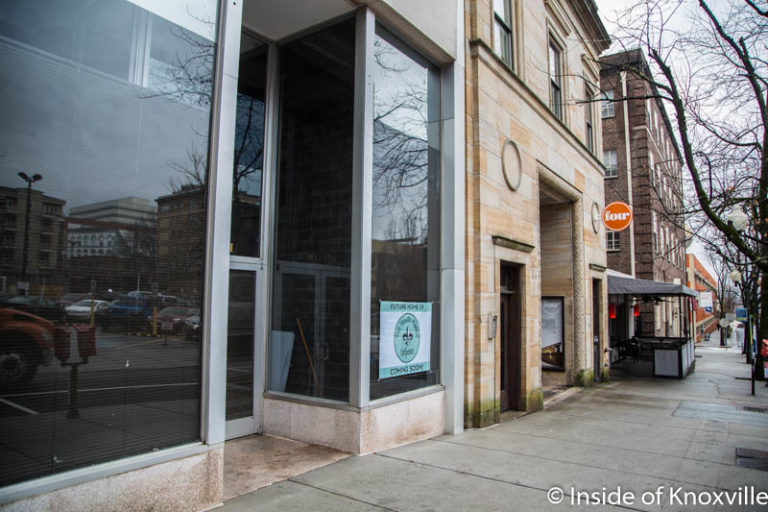 The struggles of the French Market at their current location have been well documented. At odds with Rick Dover, the developer of the Farragut, the business has not, by any account, had an easy last year or so. The photograph in this article of the current location pretty much sums up the difficulties. Last month Allen and Susan Tate decided they’d fought long enough and it was time to move on. Of their agreement to part ways with their current lease, Allen would only say, “We came to terms mutually satisfactory to both parties and we are both happy with the outcome.”

Part of what made the settlement possible was the signing of a new twenty-year lease with US Bank for the retail space at 412 Clinch Avenue. It’s a part of the bank building which, according to Susan Tate, has been vacant for fifteen years. It’s a couple of doors down from Kaizen, Jesse Newmister’s very successful new restaurant, and just around the corner from Yassin’s Falafel House. It sort of makes for downtown Knoxville’s closest attempt at an International District.

The space is being designed by their new neighbor, Studio Four Design, which sits between the new address and Kaizen. It is significantly larger than the current space, with about 2250 square feet on the main level and another 1800 on a mezzanine level. The construction, will be completed in phases in order to expedite opening, with the main floor completed initially and the mezzanine to follow later in the year. Longer range plans include the possibility of receding the facade a few feet to leave covered outdoor space.

One major advantage at the new location is the presence of a basement. This will allow the installation of a 1500 gallon grease interceptor which will service a significantly larger kitchen. Susan pointed out this is significant because it means three cooks can work instead of the one they’ve had at the downtown location, resulting in much shorter waits for food along with shorter waits for a table in the bigger space. It will also allow for a larger menu than they’ve been able to offer.

It’s one of the changes which will align the downtown store more closely to the west Knoxville store. Another being that alcohol sales, both beer and wine, are planned for the new location. The wine will be a first for their downtown store. Susan said, pending all the appropriate approvals, they hope to have French beer and cider on tap and French wine by the glass and bottle. Plans include some outdoor seating from the outset, bringing the total seating to sixty to eighty without the mezzanine.

They hope to have the move complete in eight to twelve weeks, with a dream of moving in before Big Ears. Their agreement with Dover Development requires them to vacate their current location by the last weekend in February, meaning there will necessarily be a gap of a few weeks between the closing of the Gay Street location and the opening at the new address.

After eight years of building a faithful customer base, the couple hopes people will be patient during the closure and will make the effort to leave Gay Street and find them in their new location. I’m betting she doesn’t have too much to worry about.