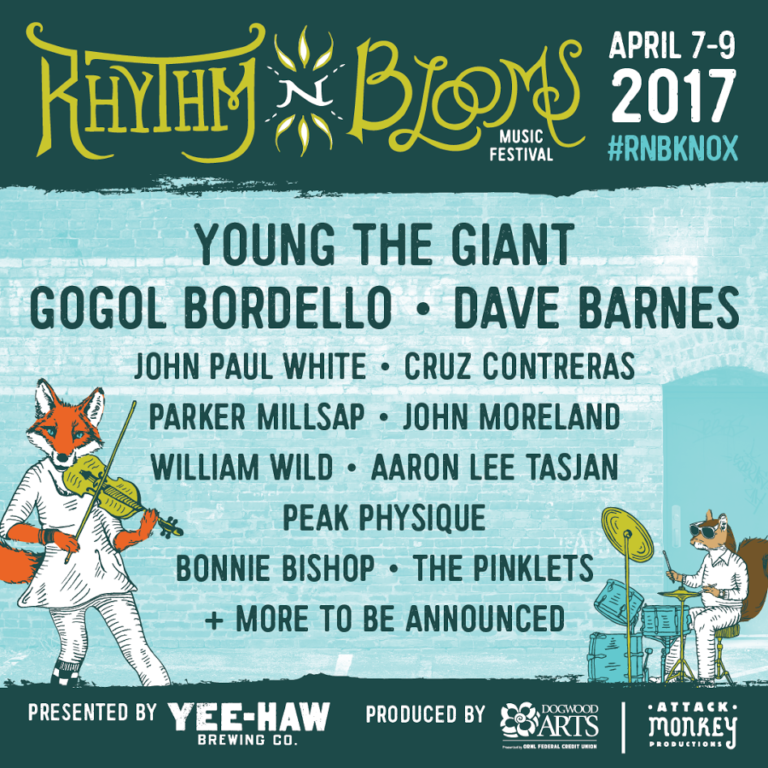 It’s that time of year. We had the Big Ears announcement a few days ago, Bonnaroo just made their announcement and today we get word from Rhythm N’ Blooms about that festival’s lineup. Tickets are already on sale here and I’ll have a couple to give away. (Details at the end of this article.) This is not a complete list. Another round of announcements will come in about a month. The April 7 – 9 festival will be here very soon. The festival is presented by Yee-Haw Brewing Company and produced in partnership by Dogwood Arts and Attack Monkey Productions.

“Los Angeles quintet Young the Giant continue to brave new sonic landscapes with their wildly adventurous third album, Home of the Strange. On this new release, the band explores their expansive musicianship with boldly eclectic arrangements anchored by a keen melodic presence . . . Young the Giant first broke through with their 2010 self-titled debut album, which featured the RIAA-gold certified hits, “My Body” and “Cough Syrup.” This was followed by the release of 2014’s Mind Over Matter, which was both a commercial and critical success and prompted The New York Times to call [Lead singer Sameer Gadhia] “one of the great contemporary rock voices.” . . . Young The Giant has charted 5 singles on the Billboard Alternative Top 10.”

“Gogol Bordello’s task is to provoke audience out of post-modern aesthetic swamp onto a neo-optimistic communal movement towards new sources of authentic energy. With acts of music, theatre, chaos and sorcery Gogol Bordello confronts the jaded and irony-deceased. Our treatment of traditional material is frivolous, but is not irony-driven and thus real. Our theatre is chaotic and spontaneous and because of that is alarming and response provoking. From where we stand it is clear that world’s cultures contain material for endless art possibilities and new mind-stretching combinations, raw joy and survival energy. We chose to work with Gypsy, Cabaret and punk traditions.”

“We all have music that transports us back in time. The song your family sings every holiday. The track that makes you reminisce about a first love. The music that instantly reminds you of where you came from but also of how far you’ve come.  For Dave Barnes, that music is from the 1970s Los Angeles scene where the Eagles, Fleetwood Mac and Jackson Browne left the greatest mark. It is these early influences’ sounds that encapsulate the direction of Barnes’ latest release, Carry On, San Vicente. “This is one of the most true versions of myself that I’ve probably ever made.” says Barnes.  Barnes is a respected Nashville songwriter who received Grammy and CMA nominations for Blake Shelton’s recording of his song “God Gave Me You,” and has also penned songs for Tim McGraw, Marc Broussard, Billy Currington, Hunter Hayes, Matt Wertz, Ben Rector and many others. He has toured extensively over the past 14 years as an artist showcasing his catalog of nine full-length albums, including his latest nine-track release Carry On, San Vicente as well as opening for artists including Bonnie Raitt, Taylor Swift, John Mayer, Lady Antebellum, One Republic and more.”

So, would like a pair of tickets? We’re going to work it the same as the giveaway a couple of days ago. Go to the Inside of Knoxville Facebook Page, “like” it if you haven’t and share this announcement, which you’ll see posted there. Simple. I’ll pick from the list of people who have shared it and I’ll notify the winner. I’ll keep it open for 24 hours.