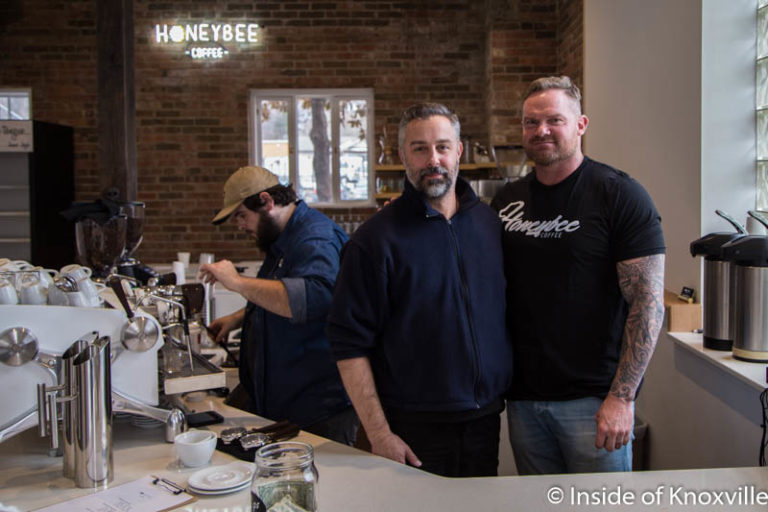 Inside what is now a beautiful building at 700 Sevier Avenue is a warm and inviting atmosphere with two spacious rooms and that aromatic smell that says, “Come inside, relax and stay awhile.” Honeybee Coffee Company held a soft-opening yesterday to make sure all was ready and they’ll open from 7:00 AM to 9:00 PM, their regular hours, today.

I met with Norris Hill, co-owner with Josh Steedley, over a cup of Ethiopian Kochere and a delicious sample of Sumatra Kerinci. The Sumatra was wet hulled, originating in Jambi, and the Ethiopian was washed, originating in Yirgacheffe. Every bean with its proper process and preparation is a theme with the business and the quality of the specialty coffees could not be missed.

Norris’ family moved to Knoxville when he was in high school and he finished here, joining the military and attending UT afterward. He helps his family run the Provision Foundation and it was through their work that he first traveled to Haiti and other countries to invest in projects there. He focused on agriculture and small businesses, helping them ramp up to a livable level.

Always having loved coffee, he visited farms and began to learn more, considered buying a coffee farm, but ultimately decided that returning and helping build a market for the excellent beans grown there would be more helpful to the farmers. He said, “I wanted to help the harvester send his kids to school and put food on the table,” adding that he wants the exporter and the importer to earn a living wage, as well as his baristas.

Focused on making each cup the best way it could be made for that bean, he also wants the public to understand all the hands that go into making a perfect cup. Considering himself a sort of, “Director of Hospitality,” he wants every customer and each barista to have a clean, honest experience in the shop and he intends to listen to both his customers as well as his employees in order to make it as good as it can be. Of his process of building relationships and supply chains he says that ultimately, “I want to know everyone who touches the bean. I want to honor their work and the customers who walk through our doors.”

He made trips to Portland to study coffee culture there, as well as trips to coffee farms, including those in Caribbean, South American and African countries. Determining he wanted to purchase a roaster and start roasting artisanal beans, he was introduced to Josh who was already roasting under the Spero brand. Feeling they shared a common vision, Josh began roasting the specialty beans for Norris, while continuing to roast his standard-quality beans for church groups and others. Norris purchased an air-stream trailer from which to sell and began taking it to festivals and other events under the brand, “Honeybee.”

Guided by selections from Norris’ certified barista son, Aaron, they identified beans in Guatemala, Haiti and Africa for use with their company. A continuing process, they are currently cupping coffee from Columbia and building relationships with the growers as they go. They started a company, Creole, Inc, in Haiti in order to answer some of the infrastructure challenges there. The company produced 500 pounds of beans this year, a fact of which he is proud, but he points out that Haiti used to be one of the world’s largest exporters of coffee.

Josh learned from the city of Farragut, where he was roasting, that they would require him to have a storefront. Once that was opened, it was visited by the spouse of Peter Medlyn who, after talking with Aaron, became convinced the company should open a location on Sevier Avenue in the McMurry Building, which was owned by her husband and Greg Cates of Saba Rock Partners. Ultimately, they agreed and the business moved into the building.

Close on the heels of that move will come closure of the current Farragut location and the opening of a different, much larger, location at 10716 Kingston Pike. The Spero brand will essentially end and the partnership will be consolidated under the Honeybee brand. All coffees will be specialty coffees, meaning they are rated at 80 or higher by the Specialty Coffee Association. Aaron interjected that their beans typically range from a rating of 87 to 93.

Josh, a practicing dentist echos much of what Norris said earlier, stating, “We are about people – people who work for us, who grow the beans and the people of south Knoxville.” Of why he decided to buy a roaster and focus on coffee, he pointed out he could have purchased a boat or a motorcycle, but he wanted a roaster.

Plans include using the Airstream for special events, but both men said if the right offer came from a foodtruck entrepreneur or someone else, they would probably let that go. Meanwhile, the two have become interested in doughnuts and will soon offer their own version at the shops. Norris visited Blue Star Donuts in Portland and was quite taken with them. Josh suggested they do their own version and he, along with the chef from Sparrow, have been testing doughs for six months. Production will start when they are able to open the new shop out west.

The shops will also offer craft beer (they are currently awaiting approval) and the Sevier Avenue store will have ten taps with eight for beer, one for nitro and one for sparkling water. The beer will focus on regional offerings. They’ll also have bottles of beer in the cooler and they hope to eventually have a liquor license, in order to be able to offer craft coffee cocktails and wine. They will have light food, with a focus on “gourmet grab and go.” They are currently working, for example, on a sweet potato, pear and brie sandwich. Norris had hopes they would have salads to offer as early as today. Eventually he hopes to offer cheese and charcuterie plates.

The new company has already worked with some other businesses you know. They provide the coffee, for example, to Tomato Head and Oli Bea. In that light, Norris said they will set up any business who wants to use their coffee with machines and training for barristas. He also pointed out that Shaun Parrish of Old City Java and Wild Love Bakehouse who has been very helpful with testing and giving feedback to help them get started.

You’ll soon find bike racks out front provided by the city and more will be added to the parking lot behind the building. When weather permits, furniture will be placed outside on the small patio and, eventually, one of the interconnected Urban Wilderness and greenway trails will pass directly behind the building.

Current plans call for opening from 7:00 AM to 9:00 PM weekdays and 8:00 AM – 10:00 PM on weekends. During those hours you can stop in for a beverage or carry home beans, their own bottled cold-brewed coffee and coffee concentrate. They want you to come in and enjoy an atmosphere conducive to good conversation. Norris pointed out the James Joyce quote over the beer cooler, “The sacred pint alone can unbind the tongue.” He pointed out that it’s true for beer or coffee.

Also check out their Facebook Page and give them a “like,” and, particularly, they have a strong Instagram presence they’d love for you to follow. If you stop in, tell them you saw it here.