An Update on Riverwalk at the Bridges (The Baptist Hospital Site) 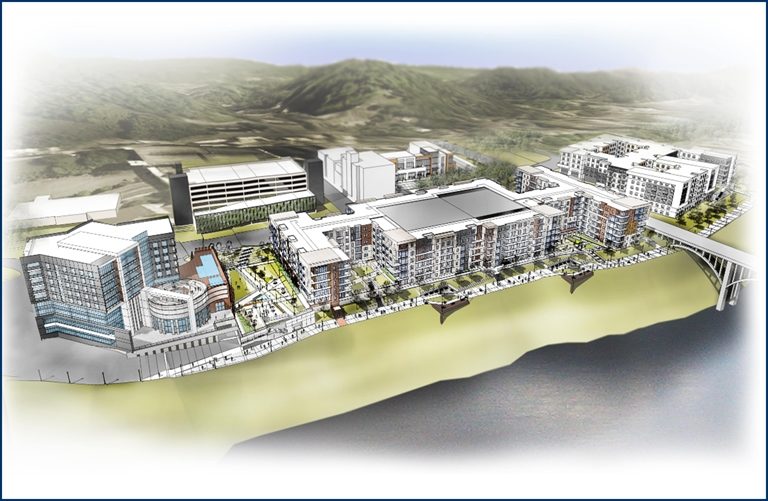 Rendering of "Riverwalk by the Bridges"

It’s been a long and winding road to the ultimate development of the Baptist Hospital site. As far as I can determine, I first mentioned it on the blog in an April, 2014 article looking at the hospital’s past and present. That article references a Josh Flory article from June, 2013 which announced the first version of the plans. That article is gone and so are many of the original plans. An Inside of Knoxville reader, Stephen Harris, helped write a piece in September detailing his vision for the south waterfront and I included a number of pictures of the demolition in the article. I wrote about the first updated version in November, 2014, though it’s evolved since then.

In October, 2015 the news about the site centered around the purchase of the office building on the east end of the site next to the Gay Street Bridge by Regal Entertainment for their corporate headquarters. It represented a significant change for the site, as that building had been slated for hotel development. Many of you raised questions about the deal and I followed, in November 2015, with an article looking at specifics of the deal and a conversation with Vic Mills, founder and CEO of Southeastern Development Associates (SEDA).

That was over a year ago.  By the schedule he’d hoped for in the last article, the construction would have been completed by now. We have seen much of the rubble cleared, a parking deck erected and support columns raised on the site.  It seemed a good time for an update.

Mr. Mills told me that some things have remained roughly the same. Student apartments are still planned and are under construction on the western side of the Henley Bridge, for example, and should be available for the beginning of the 2018 school year. That said, his company is no longer involved in that project, having sold it off.

The number of apartments planned on the main site has shifted around a bit, but, at 315 units, that is similar to the original numbers announced. Still included is a, “20,000 SF event terrace and a 1,600 foot Riverwalk which fronts the Tennessee River.” Mr. Mills told me plans include a public elevator and steps connecting this 1600 feet of Riverwalk to the portion the city has already completed to the west of the Henley Bridge. Continuing the path closer to the waterfront proved problematic.

He says the “parking deck is complete,” and that the crews should, “finish the pilings and pedestals in the next few weeks.” Saying that the project, “at this stage is more predictable,” he estimated an occupancy date of the first quarter of 2018. Asked about retail on the main site (the project page still lists it), he said there would be a very small retail portion near the Regal Headquarters building.

The most interesting news regards the use of the property across the street, which the company owns, from the parking garage (which will be shared by Regal employees, residents and the public) through to Chapman Highway. You may have noticed the demolition of the old hotel near the corner of Blount and Chapman. That emptied spot and the former office building beside it represent the next design and development phase.

A 90 to 100 room hotel at the corner of Blount and Chapman is an almost certainty, though Mr. Mills declined to name, “the flag,” at this time. He also said a restaurant is planned for the corner and he’s been in talks with interested parties locally. The office building that is standing could become a second hotel or it may be developed as condos or apartments. Noting that in any case it would need a, “new skin,” the plans there are, obviously, more fluid.

So, that’s the latest. Three projects from the original one and all seem to be making significant progress. The Regal Building had workers removing or replacing windows when I walked past and the outside of that building is transforming. We’re closing in on four years since Josh Flory’s first article and that’s a long time, but the end really does seem to be in sight. It’s a good lesson in patience regarding other projects which seem to take longer than expected. Good things are happening, they just don’t always happen on our timeline.