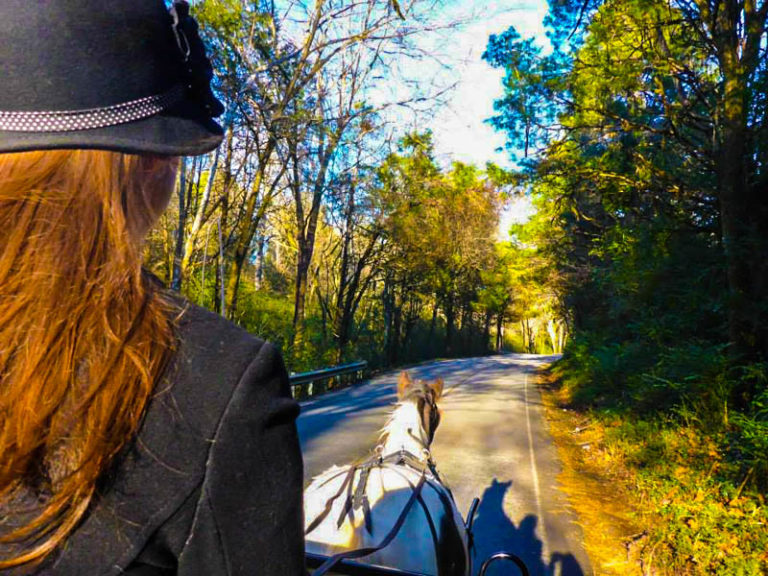 Some of you may remember downtown Knoxville carriage rides at Christmas. I know we had them after I moved to the center city in 2009, though I’m not sure when they’ve ended. Now a Knoxville couple, owners of Knox Carriage Company, is interested in re-introducing them – on a limited, special event, basis at first – but with the possibility of expanding that in the future.

I met with Ashley Grennor who, along with her husband Chad, lives in the Lincoln Park section of north Knoxville. The couple met in 2005 in Rome, Georgia, when she answered a call for an audition to be the vocalist for Chad’s band. She passed the audition, got the gig and the couple married. They have continued the band Annondale, whose music she compares to the Foo Fighters, and they have an EP set for release in March with a release party at the Open Chord.

After graduating from Berry College, home of the, “world’s largest contiguous campus, spanning more than 27,000 acres . . .,” the couple moved to Chad’s native Atlanta where they spent some time in the suburbs and some time in the center city as he pursued his second B.S., this one in Nuclear Engineering from Georgia Tech. After college, unhappy with life in Atlanta, the couple moved to Knoxville when Chad got a job with TVA in 2008.

His first office was in downtown Knoxville and Ashley soon became an Engineering Support Supervisor with the agency and joined him in working downtown. He eventually left TVA for work in Oak Ridge and she left in 2016, after eight years, as her grant began to diminish. She started a company, Top Tier Admin, providing virtual assistance and social media management to companies.

The horse and carriage idea had already been brewing. Growing up with horses in Littleville, Alabama, she’d always loved them and missed having them. In 2011, she began talking to Chad about the idea and he wasn’t too keen on it. Deciding to get a carriage so that Chad might come along, she settled on the purchase of a two-year-old Gypsy Vanner, a breed developed by the Romani people to pull wagons, they are both gentle and strong. She named her horse, “Thunder,” and set about training him in every respect up to and including to pull a carriage.

After working with a professional trainer for a couple of months, Ashley took over. The breed requires extra grooming because of the beautiful feathering around their legs. She also tries to take him out several times each week and has a farrier take care of his hooves monthly. She doesn’t want him to wear shoes because it tends to damage both hooves and legs over time and reduces traction for the horse.

While they’ve been riding in the area of Riverplains Farm, where Thunder is boarded, they are interested in offering rides in downtown Knoxville and are pursuing a Special Event Animal Drawn Carriage Permit. Ashley envisions offering the service for weddings and receptions in the downtown area, particularly.

It’s a step toward the possibility of offering regular downtown carriage rides in the future, but that is a much more involved  process, starting with a twenty-one page application and carrying with it numerous requirements and restrictions. She’d also have to buy more horses and carriages and will consider that in the future.

Noting the cruelty which has been documented by some in the industry, she’s quick to point out that she loves horses and would never do anything to jeopardize their health or well-being. She also notes that she would never have a horse downtown without a “manure catcher,” which I assured her would be appreciated by everyone who lives downtown.

So, should the permit be approved, we may, once again, hear the sound of hooves clopping down the streets of the center city. If so, be sure to say, “hi,” to Thunder and to Ashley and, in the mean time you can follow them on Facebook to learn what the couple is up to and what opportunities you might have to take a carriage ride.