A First Look at Designs for The Residences at Pryor Brown 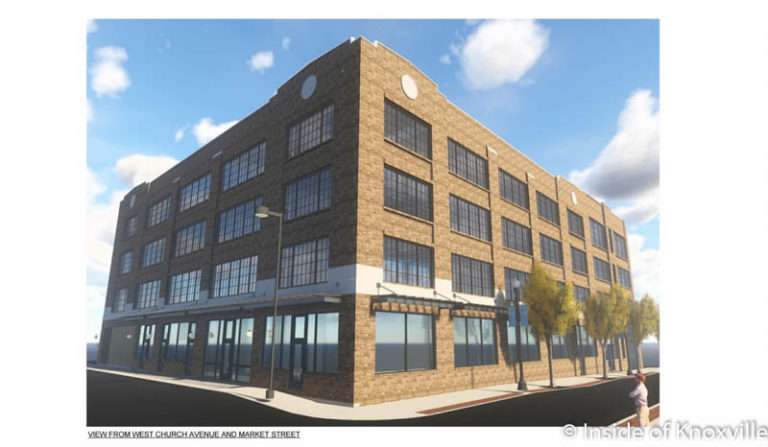 Preliminary designs have been released for the Pryor Brown Garage as it shifts to The Residences at Pryor Brown. Things can change, so take these for what they are, but they are likely a close representation of the finished product we’ll see at the end of the project. The architect of record is Faris Eid of DIA and the drawings and renderings here are the property of DIA.

Along the Church Avenue, or northern, side of the building, the retail space will be kept, as had been previously stated. I don’t have square footage numbers, but from the appearance of the diagram would indicate four-to-five small spaces, which would be very helpful to downtown retail. Larger spaces, with their commensurate cost are often prohibitive to independent business owners. That side will also include the present garage entrance with a new garage door and sidewalk canopies will be added to the retail spaces. Windows will mimic the historic windows, but they will be modern and energy efficient.

Along the Market Street, or western, side of the building there will only be two entrances: a lobby entrance into the residential portion of the building and another garage entrance where the current garage entrance is located. I’d hoped to see a couple of retail spaces along this side of the building, as well, but from the diagram, it would appear the space for these was used for four parking spaces. I can only assume they were essential to provide all the residents a space, but it’s unfortunate that it couldn’t be worked out.

The south and east sides currently face the parking lot that fills the remainder of the block, so those sides will get less external attention along the bottom floor, but the second through fourth floors of the four-story building will have covered balconies for each unit. As with the other sides, the brick facade will be retained, repaired and restored following Dept. of Interior guidelines.

Probably the biggest surprise in the plans is the inclusion of a one-story rooftop addition. Recessed from the roof, each penthouse unit will have a private rooftop patio which will be partially covered by an extended roof. The setback on each side will minimize the visibility of the structure from the street below.

Current signage will be removed from the building and new signage is still in design. Light fixtures around the building will be replaced with fixtures mimicking the era of the building’s construction. The drawings also show trees remaining along Market Street and just past the corners of the building leading to the parking lot. They contribute to the attractiveness of Market Street, one of the prettiest streets downtown.

The biggest news in the proposal, however, isn’t visible in the drawings: According to Rick Dover, the units will not be apartments as originally planned, but rather will be sold as condos. He said it was dictated by the market and that the return from leases would not be enough to cover the expense related to restoring and re-purposing the building. Condos will be marketed in coming months.

The plans aren’t final, but they are likely close. The only point of discussion appears to be the direction a door swings on Market Street – inward or outward onto the sidewalk. Expect to see movement on the building in the coming months.

Finally today, an update on the Rhythm n Blooms giveaway and another giveaway for those of you who have paid attention all the way to the bottom of the page. Mitchell Beason informed me he would be unable to use the tickets and so, another random number generation later, the tickets are now headed toward Inside of Knoxville reader, Brianna Crumpton. Congratulations, Brianna.

This weekend promises to be a busy one downtown, and one of the major events is the Great Smoky Mountains Outdoor Expo at the Knoxville Coliseum. Tickets are $12, but I’ll help you out. I have five pairs of tickets I’ll give to the first five people who email me at KnoxvilleUrbanGuy@gmail.com and use the subject heading, “Great Smoky Mountains Outdoor Expo.” (Ed. Note @ 8:30 AM: The tickets are gone. I will notify winners.)