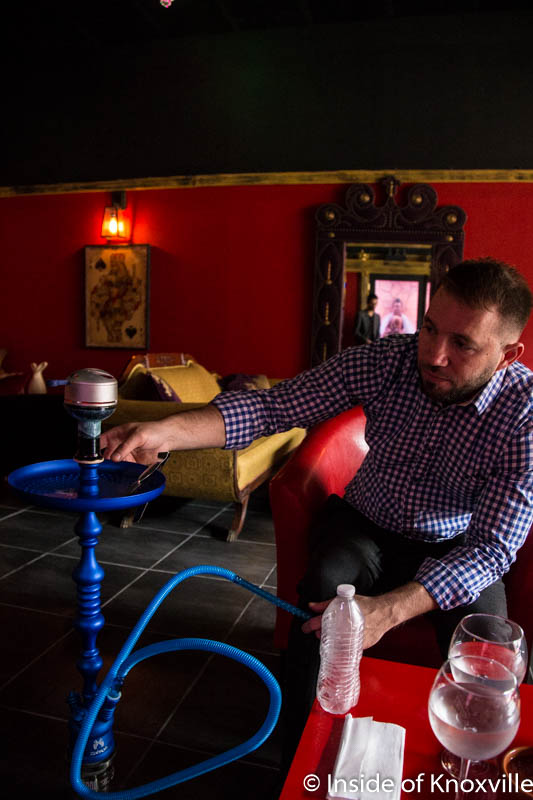 The newest business in the Old City opened very softly on New Year’s Eve and a few nights since. Owner Mohammed Fawaz, who you may remember the owner I mentioned in my article about the opening of the Juice Box last spring, says the response has been instant and very strong. A snapchat photo, he says, or a Facebook reference to opening the doors of Exhale Old City for a few hours brings an immediate crowd to the new location at 108-2 East Jackson Avenue, between Pilot Light and White Buffalo.

He also operates another hookah lounge near campus, but says that location is much more casual and is directed at students (it is 18 and up). The campus location, which has been open two years, has only been his business for six months. With about an eighty-person seating capacity, patrons often have to be turned away because they are full.

He’s serious about his hookahs and says the new hookah lounge is the best you will find outside a large city. He points to Chicago, New York City, Miami and others as having excellent hookah bars as a result of larger concentrations of Arab Americans in those places. Outside these spots, he says you won’t find the quality you’ll find at Exhale. Not in Nashville, not in Asheville.

It’s the setup and the quality of the tobacco which makes the difference and he points out that each of his hookahs cost about $200, far more than those found other places and that many of the components are hand-made. A hookah consists of a water pipe including a body, stem, water base, hose (they use disposable hoses, so everyone gets a new one) and a bowl for holding the tobacco. The flavored tobacco (shisha) favored by the lounge is Starbuzz, which is very high-end.

The complete absence of air leaks makes the experience more pleasant and prevents head-aches after smoking and theirs are completely sealed with a galvanized metal body leading up to a beautiful hand-made, glazed, clay bowl. The coals are contained by a metal top – which is to be compared with the tin-foil tops favored in many shops. Their coals are coconut coals, another small detail which makes a difference.

His goal is to attract young professionals and others who would like to have a relaxing evening with friends and prefer to avoid the loud music and dance floors of many of the other Old City options. He describes the hookah culture in his native Lebanon (though he grew up in Nigeria) and elsewhere to be one of good conversation and comfortable social encounters. He said that hookahs are so common in Lebanon that even Starbucks provides them. No alcohol will be served, though he says customers may bring their own wine, if they like. The lounge is restricted to twenty-one and up.

If you’ve never been inside a hookah lounge, you might be surprised to find a sweet smell that in no way resembles the smell of cigarettes or cigars, both of which are not permitted. A lengthy list of flavors is offered and customers are allowed to blend tobaccos making an almost endless list of possibilities. One of the strongest flavors has dedicated hookahs so the flavor doesn’t contaminate the other tobaccos. Each hookah is meticulously cleaned after each use.

One hookah, which can last around an hour and may be shared by up to three people, costs $20 and includes an appetizer. Mixed nuts and chips with salsa are currently available. I particularly enjoyed the mixed nuts and he says he’s talking with Yassin about the possibility of offering his hummus. Crepes, which have recently become a hit at the Juice Box are also available. They are starting with sweet crepes, but will soon add savory and sandwiches and paninis are under consideration. They also offer Turkish and American coffee and Chai Karak, a drink I’d never had, but enjoyed greatly when I stopped in.

Mohammed says the goal is to be like a hookah cafe one might find in the middle east, though he points out they would have open-air seating and maybe an Arabic singer. He doesn’t have plans to include those, but he plans to play interesting music and he hopes it will be a place where cultures collide and people learn more about others who may be different.

Aqeel, the manager, who is originally from Saudi Arabia and has a degree in mechanical engineering, came to Knoxville by way of Jordan and Portland, in order to further his studies. Using his management experience and his experience working at another hookah bar near campus, he’s excited about providing excellent service, saying that he enjoys reading the room to notice quickly if someone has a need. He also enjoys making improvements behind the scenes and says his goal is that customers have not a good, but a perfect experience.

Initial hours are Thursday, Friday and Saturday from 6:00 PM – 4:00 AM. When my eyes bugged out a little at the 4:00 AM closing time, he laughed and pointed out that they’ll stay open later (or earlier?) if they are busy. Hours may be expanded later. More information is available at their Facebook page where (if you scroll through the posts) a menu is available. You’ll not meet friendlier people, so if hookahs sound interesting to you, stop in and introduce yourself. And check out the cool Buddha.