KyBrA Athletics is Open on Broadway 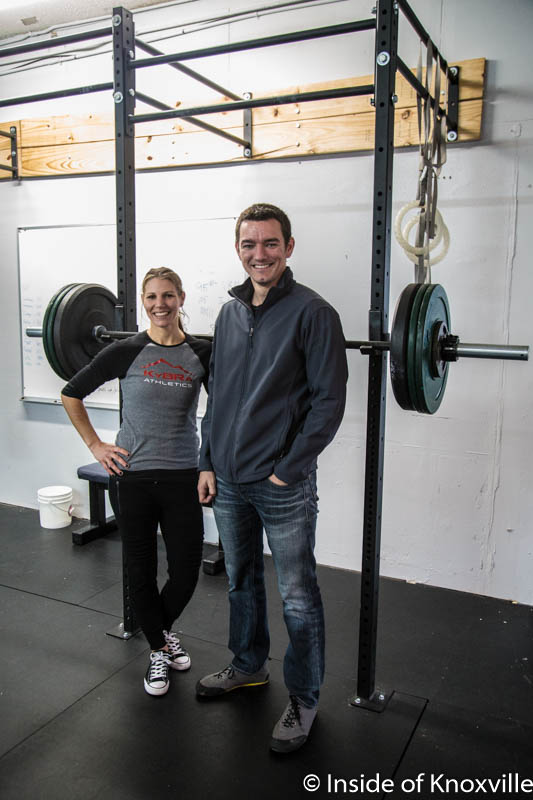 A new gym, KyBrA Athletics opened recently at 804 N. Broadway, about three blocks north of Central Street. It’s a strength and conditioning gym operated by husband and wife team David and Sue Finney. David’s from Nashville and Sue is from Cleveland, but they met in Fayettville, W.V. while he attended Virginia Tech and she worked as a river guide. After he traveled all over the world kayaking, the two settled in together and after nine years of marriage have three children, ages two, four and seven. After a spell of living in New Mexico, they moved east to be near family and near the mountains.

David’s degree is in Business Writing and Communication and he works full time for 21st Century Mortgage in sales and marketing. Sue has an MA in Education and worked for seven years in a classroom for emotionally disturbed children. After the birth of their third child, she felt working full time would be difficult. She left her teaching career, but felt a pull back to athletics. Both of them had focused for years on various sports. In her case, she was a triathlete, pole vaulter and mountain biker.

In an effort to stay active and stay connected to sport, she began working as a personal trainer and quickly understood that her teaching background helped with the new pursuit in understanding what it takes to communicate with and inspire others to do their best. He’d also taught kayakers and triathletes and they are both certified through Gym Jones. It became increasingly obvious to them they should start a gym.

So far, everything about their operation is low-key. They haven’t advertised, but rather focused on making sure everyone who comes to them improves and meets their goals. Their philosophy is like the Gym Jones statement: “Gym Jones is not a cozy place. There are no televisions, no machines, no comfortable places to sit – and there are no mirrors.” With the exception of one mirror I spotted, this perfectly describes what you’ll find at KyBrA (the name comes from a combination of their children’s names). David said they want to spend their money on things that help people get into better shape, not objects to make a pretty space.

The place is bare-bones and industrial. It reminds me of a cross-fit gym, in some respects, but they are not cross-fit. Sue described it as being more like the athletic gym you worked out in while in high school or college. In their approach to personal coaching or in group instruction classes, the emphasis is on pushing and encouraging each other. They want to engender well-rounded fitness, not simply strength.

The couple said there will be changes, though the essence of the place will remain the same – helping people find excellence at what they do. They have plans to double their space by taking the adjacent portion of the building. They’ll also gain room for upstairs offices, allowing all the floor space to be devoted to workouts. The building owner, Greg Love, also plans to apply for a facade grant to refurbish the exterior.

They explained that the “athletics” in the name of the business doesn’t necessarily describe who they train, but how they train, though they do count former Division I athletes among their clients. The intent is to help individuals become strong, not only in body, but in mind and attitude, challenging them to work harder. Sue said the approach, if embraced, is life-changing. For this reason, they focus on all aspects of health, including diet.

Sue will be the manager and leads the classes offered, which include foundation, strength and conditioning. The classes are not sport specific and sometimes include people who have never exercised before. Prices for the classes depend on the client’s participation level. There are no contracts and a two-week free trial for classes is offered. Personal training ranges from $50 to $75 per session and virtual and sport-specific options are available. You’ll find all those details on their webpage.

So far, a large percentage of the clientele has been people who are into outdoor sports. The morning I arrived for the interview, Sue had just returned from a bike ride with an early morning endurance group who had ridden up Sharp’s Ridge. (Not easy, FYI, according to Sue). The clientele has also leaned toward people who enjoy a specific demanding sport on the weekends, but want to stay in shape through the week so they can have fun at their sport on weekends.

October was their first full month of operation and David said they’ve been surprised at how quickly it has grown, simply by word-of-mouth. They began build-out with no clients, but their first one walked in and signed up while they were completing work on gym. He’s still with them, as are all the clients who have started. They will expand sooner than they could have imagined and the 4,000 square feet of work out space will be quickly put to good use.

They hope they are promoting and building a support family for fitness. If someone doesn’t show up for  a workout, for example, they get a text. They will do everything possible to help people succeed. Sue said, “It’s for everyone, but it’s hard for everyone.”

You can contact them through the Facebook Page or website. Drop in and check it out, try their free classes or, drop in for Friday Happy Hour. At 5:45 on Friday afternoons a free class is offered and it attracted twenty people last week. The group usually takes the party from there to another spot to continue socializing. And building the fitness family.