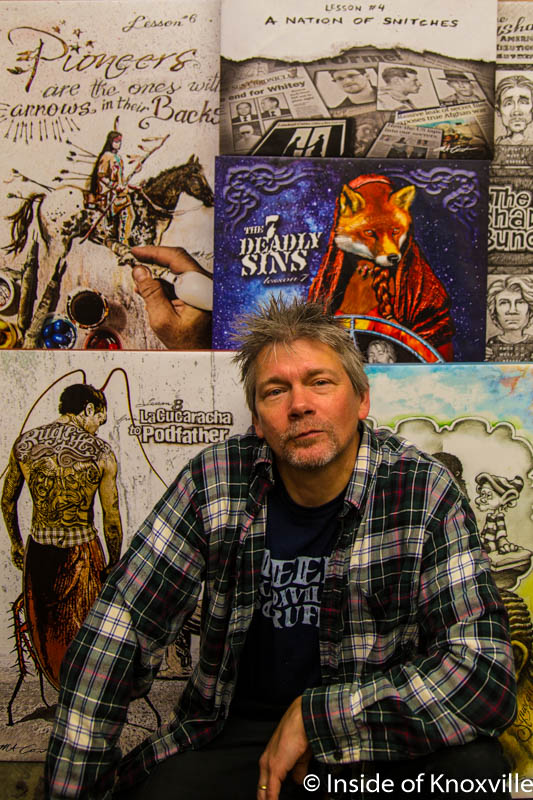 You’ve likely never read a book quite like this one (pre-order here). If you know Scott West, co-owner and operator of Preservation Pub, Scruffy City Hall and Market House Cafe, that doesn’t surprise you. Written during his time in the Blount County jail starting in 2006 and, predominantly, during his time in Federal Prison Camp in Montgomery, Alabama, the book is hard to characterize. It’s confessional and testimonial. It’s justification and rationalization and sometimes verbal self-stimulation. It’s a history of sorts and it’s somewhat auto-biographical. And it’s funny.

Perhaps most accurately, it is a psychological auto-biography. Obviously bright and witty, clever and verbal and, he’ll readily acknowledge, more than a little ADD, there are signs of all that in the book. It’s by turns sarcastic and stinging, poignant and instructive, personal and removed. He says he was fully prepared to build an alternate universe if he’d gotten the 25 years to life which had been threatened.

As it was, four-and-a-half years behind bars and in a half-way house gave him more than enough time to write three volumes of The Crook Books, as well as numerous songs and poems. His degree in creative writing, with a scholarship for poetry, finally found its use. Not surprisingly, you’ll find anger and bitterness, though less than you might expect. You’ll also find a large dose of humor in these 350+ pages and insight into how a person might cope with four-and-a-half years in a different situation from any they expected or planned.

The story has been well-chronicled and is reviewed in the book. Scott and Bernadette West rose to prominence in downtown Knoxville starting in the 1990s and running through the early 2000s. Along with family members, they opened a series of businesses and rehabed a series of buildings starting in the Old City and spreading to Market Square. It could be argued that Bernadette saved a number of buildings from ultimate loss simply by persistently convincing their owner to sell to the couple. Their efforts were a huge part of downtown’s nascent resurgence which continues today.

In search of cash to rapidly fuel their preservation and renovation efforts, however, they began to launder money generated from a marijuana distribution operation guided by Scott’s brother Mike. In 2006, the growing empire crumbled when federal agents raided West properties and they were charged with, among other things, a money laundering conspiracy. Properties seized and businesses temporarily closed, Scott told me he, strangely, felt relief.

The pace at which he and Bernadette had pursued their preservation, restoration and business goals was not sustainable. Exhausted, he knew he would be forced to slow down. From the day he got indicted he knew he would write about his experience, saying, “It kept me from freaking out about my life.” Hoping he would not spend the rest of his life in prison, he said if that had happened, “I would have lived in my mind.”

Believing humans take about three months to adjust to even a drastic change in circumstance, he began adapting. The first six months in the Blount County jail he says were some of the hardest months of the stretch. Not designed to be a long-term residence, there was little access to daylight or other simple human reassurances. Prisoners horrified at spending the night in jail were grouped with prisoners facing potential decades in prison. The stress was intense.

It was the loss of human touch he remembers the most. The worst mistake a prisoner could make was to show weakness. To face potentially a minimum of twenty-five years and be denied the capacity to react as a human – tears could be deadly – served to remove the comfort of common emotion. That combined with the loss of human touch dehumanizes the prisoner.

A number of factors fueled the release of the book, which his family urged him not to publish immediately upon his release in 2010, though they now agree enough time has passed. There is an element of evening scores: snitches get particular attention in the book. He felt attacked by people he thought were friends, saying he felt like he was bleeding and his neighbors were sharks. People who he knew believed marijuana should be legal expressed moral indignation. People thought they were finished and wouldn’t return.

He says it made him stronger and more determined to write this book and the next two, which will be released in 2017. He considers the volumes a “reintroduction to the truth about what happened,” saying he is determined not to be written out of Market Square history as he feels has happened in the past.

So, is the book revenge? Not so much in that it attacks particular people, though clearly more than one person still holds his ire. He says, “the best revenge is living well after you get your revenge.” He was driven, not only to write the book, but to see it published. He says he doesn’t care if it sells, but the publication has helped him rid himself of some of the bitterness, calling it, “critical to coping with what happened. I needed to knock the chip off my shoulder.”

You’ll find a history of criminals, of marijuana and even a short history of the U.S. You’ll find a fairy tale and poetry alongside a sociological exploration of the mugshot and its place in modern culture. And what is a prison book without humor? There’s plenty of that here, with chapter titles like, “How to Start a Prison Bedtime Story: Muthafucka, You Ain’t Gone Believe This Shit,” “Smugglers Aren’t Theives – I Plead to Drink the Fifth,” “The Seven Deadly Sins – Which Is Your Favorite?,” “I Love You – Despite the Restraining Order,” and the Epilogue, “I Am a Man of Conviction.”

Pointing out that “99% of the crimes in history are no longer crimes,” he says he doesn’t consider what they did as wrong, though he acknowledges it was illegal. Pointing out that Jesus Christ, George Washington and Nelson Mandella were all accused of crimes, though what they did was right in the arc of history, he says “None of us broke the law with bad intent.”

At once serious, and not-so-much, Scott wants the book to be entertaining – and, in my opinion, you’ll find it so. The cover refers to the book as a “bathroom coffee table reader.” He wants you to dip in from time to time for a little fun, with no need to read sequentially, though I found that it reads very well straight through.

You’ll also find excellent art by Mark Cort who was incarcerated with Scott and who had such a drive to pursue his art while in jail that he used a spork, human hair, thread from a mattress, coffee and dye from m&ms to make brushes and paint, which he crafted on the backs of the pages of letters from his mother. Some of the art in the book was completed using the original rudimentary supplies he fashioned in jail. As you can see from the photographs, it is quite striking and stands well on its own, though it threads very well with the story.

Your first chance to purchase a copy of the book will be this Friday night from 6:00 PM – 9:00 PM in the Speakeasy (2nd Floor) of Preservation Pub. The first edition will be paperback and will cost $15.95. Scott, Bernadette and Mike West along with Mark will be available and large prints of Mark’s work from the book will be on display. You may also pre-order the book here.