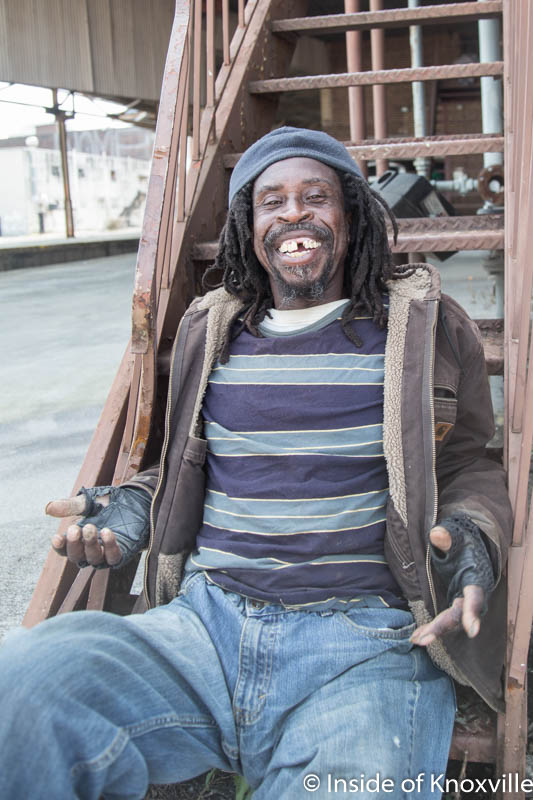 While others around downtown have known him much longer and better than me, I met him last spring as I photographed the proposed site for a community garden. Reclined on an old fire escape on the backside of an industrial building, crutches due to recent surgery leaning nearby, it was easy to sense his warmth.

I squatted against the building as he told me about his life. He’d had the surgery, he pointed out and the leg made getting odd jobs more difficult. He talked about a job he could have had at a call center in west Knoxville, but the bus didn’t go close enough to get him to work. He told me about attending Knox Life church in the Bijou and about a video a student made of him.

He really wanted me to see that video, which he had on an old computer he kept at Adorn Decor. Sadly, the other times I saw him, I was hurrying on my way and I never took the time. I should have sat with him and let him show me his video. He commented – without judgement – that I was always in a hurry.

He also told me about his children and grandchildren. He was proud of them, but said he could never impose on them to help him. He felt he would be a burden. We talked about him getting a bike and  he told me he lived under the nearby overpass. I asked if I could take the photographs you see here and he agreed. He gave his trademark smile in one of them, missing teeth and all.

We spoke many times in the subsequent months. I saw him election night and he introduced himself to Urban Woman, commenting he’d never seen me with her before. The last time I saw him was November 18, five or six days before he was found dead. We spoke as he passed the alley beside Java. I explained who he was to Preston and Mitchell and they indicated maybe they could give him some work.

Thanksgiving Day after having a meal with friends at a Lake House, we returned to downtown and as I walked downtown Gay Street, I stopped to talk to one of the cooks from Five, to ask about their Thanksgiving meal. It’s free, donations accepted and draws a large group of homeless patrons as well as many from downtown who share a meal with them. He said it went well and one particular homeless group lingered.

He said he felt like they needed a place to be together. He said they’d lost one of their own and seemed to be mourning the loss. I asked him who had died and my breath caught when he said, “Charles.” The street is a hard place to live, so it shouldn’t be shocking, but it shocked me nonetheless. I hadn’t thought of him as in such poor health.

Various people who knew Charles began to ask questions online as word circulated. Michael Haynes heard he might have died and asked, starting a conversation that included Gloria Johnson, who confirmed it. She said he got his mail in the Knox County Democratic Party offices at nearby Morgan Street. His sister called their office because their number was in his pocket when he died.

She said she, “met Charles when I was KCDP Chair and we were remodeling our new office. He was always willing to work and was quite skilled when it came to putting up walls and laying tile. He has gotten his mail there ever since summer of 2009. He stopped by almost every day to say hi and see if there was any work to be done. We tried to make sure he had the essentials he needed. He always asked about my family and I was hoping to see him last week because I figured he would be looking for extra cash to go see his family in Delaware. I could always count on Charles for a big smile each day! Broke my heart today to find out his family had no idea about his life and would have done anything to help him if they knew.”

Allen Halcomb who knew him from both the Old City and through Knox Life Church posted this remembrance on Let’s Talk Knoxville:

“We lost a good friend this week. Charles Ervin. I am a better person because I knew him. He was full of personality and he challenged my way of thinking about people with struggles that I don’t have. He was a regular attendee of Knox Life Church, and later Awaken City Church in the Old City. Everyone there knew Charles. He was an unofficial greeter, always with a big smile on his face. On testimony days, he was front and center to share what God was doing for him.

“He spoke of his faith in Jesus Christ. He was kind to everyone. The bench at Jackson and Central was his daytime post. Recently, he had just gotten over a broken leg and had begun to do odd jobs around the Old City again. He was a weekly sidewalk sweeper. The great guys at Java would loan him their broom.

“He had been a truck driver in earlier years. He spent part of his youth growing up in Jamaica. He has children and grandchildren. The grandchildren called him Pop Pop when they would call him on his cell phone. He would smile from ear to ear to tell me this. Sometimes they would call at night to try to get him to tell their mommy it wasn’t time for bed. He reassured me that he insisted they listen to mommy. He spoke with excited anticipation of a daughter and her husband that would come in town to pick him up on occasions for visits.

“He lived below the bridge behind the dog park and slept in an army issue sleeping bag in a tent. He had few possessions, but he was always stylishly dressed. He could turn $10 into a whole new outfit.

“We are all made in the image of God, and He sees us all with equal value. Charles, you were the handiwork of a glorious creator. So long friend.”

I also heard from Erin Hall who’d gotten word and messaged me to confirm. She met him while she worked at Rocky Top Crossfit when it was located on Central. She said, “Charles…was such a good one. Always had that smile. That huge, amazing, warm smile. Even when he was down, even when he was having a bad day (and Lord knows he’s probably had bad days that my bad days can’t imagine) – even then, if I passed by and said hello, he’d look up and put on that amazing smile. He worked for us, at Rocky Top CrossFit. He cleaned our floors once a week. He did such a great job! I’d make him tea with honey, and he’d listen to 90’s hip hop.”

I contacted Sean Alsobrooks, long time minister at Knox Life who said, “Charles was part of our Knoxlife Community and a downtown neighbor for many years. We certainly had our challenges and growth opportunities with Charles over the years, but overall he was a good guy and we will miss him for sure. He was always willing to stick around and help out and had a loud, vibrant laugh that made you smile when you heard it.”

Charles will be missed by many and remembered and mourned by more than he might have realized. If anyone knows of plans to collect money to defray funeral costs or plans for a memorial service, please post it in a comment below.