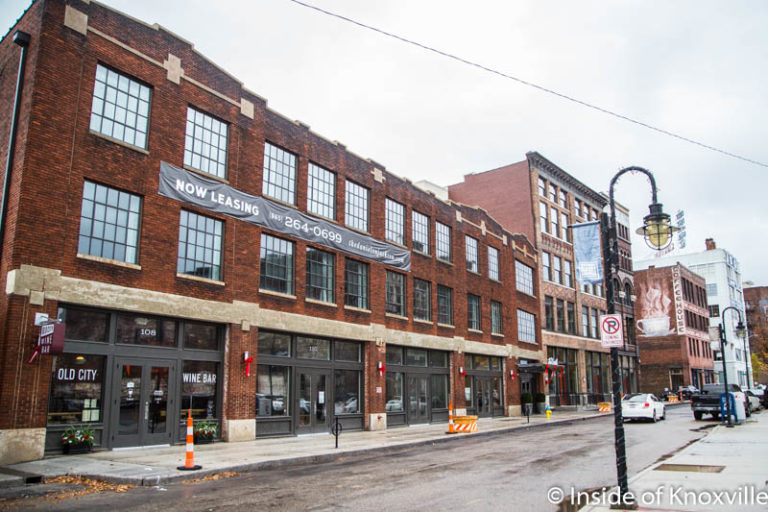 Daniel Bldg., Future Home of Rala, Jackson Avenue, Knoxville, November 2016
As I talked with Nanci Solomon, owner of Rala, and long time owner of Reruns, she pointed out that she opened Rala the same month I started writing this blog: June of 2010. At the time, she also operated Reruns, which later moved from 2 Market Square to a location down Union in the Daylight Building where it subsequently closed. She has had at least one business on Union Avenue for thirty years.
That run will come to an end in March of 2017 when Rala moves (and expands) to 112 Jackson Avenue, in The Daniel. The hope is to be open for business in the new location by March 3. While the move was forced by a non-renewal of the lease at the current space, she says she is, “thrilled to announce our expansion and move to the vibrant arts district of downtown Knoxville.” The search for a perfect space wasn’t easy, as small retail spaces in downtown are in short supply and have become considerably more expensive.
The new space will be considerably larger, allowing the store to expand from 650 square feet to about 950 square feet. It also features much higher ceilings, allowing for more art and larger canvases to be hung on the walls. The new space will be put to good use with events and classes. Nanci also pointed out that a number of artists with whom they have relationships are making art objects of small furniture pieces and she hopes to incorporate some of these home accessories. You’ll also find a greater supply of some of their most popular items, such as the greeting cards and, of course, there will be more art.
Another, somewhat surprising addition will be a small selection of local food products, including Three Bears Coffee. She’s also hoping to include UT design students’ work as well as more pieces from local woodworking artists. She told me you’ll also find the large “MAKE” letters from last spring’s Etsy conference, which those who attended will remember.
Brian Pittman of Johnson Architecture, whose cathedral art, currently displayed at Rala, you see in the photo with this article is lead architect in the design of the new space. Ron Turner and Jon Clark, owners of The Daniel, will over see the construction. You’ll see it progressing soon two spaces down from the Old City Wine Bar. Where currently one larger space exists, there are two entrances and a wall will be constructed between the two.
An obvious question, given Rala’s move from their current space, is what’s happening there? Why was the lease not renewed? The news on that front is not good. I’ve been told by multiple sources that the space will be converted to residential and connected to the upstairs condo occupied by the building owner. It is extremely unfortunate to convert a successful street-level retail location to residential at a point when we are working so hard as a city to do the opposite. It contradicts everything our Downtown Design Review Board is attempting to achieve and from an urbanist perspective, is a very unfortunate decision and represents a regression for the city.
For now, you may continue to enjoy Rala at their current location at 323 Union Avenue. Hours of operation are Monday through Saturday 10:00 AM – 9:00 PM and Sunday 11:00 AM to 6:00 PM. They have forgone a first Friday event this month, due to the Christmas parade, but will host an event Thursday, December 8 in honor of Cynthia Markert and the installation of her latest art exhibition, which you see behind her in the photograph. Be sure to drop in, check out Cynthia and Brian’s art and wish Nanci well at her new location. Follow them on Facebook and shop their online store here.