Photographs and Updates from Gay Street Projects (And New Businesses) 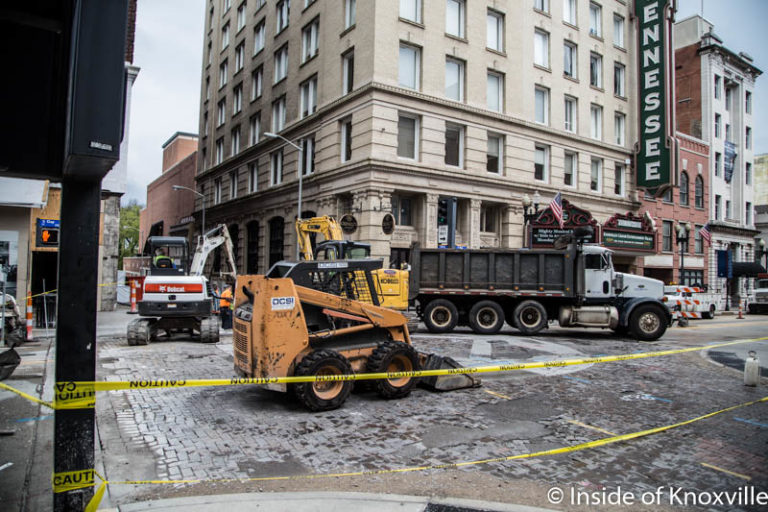 Construction at the Farragut Hotel/Hyatt Place is continuing at a rapid pace internally. The building has been virtually gutted, as is obvious in the photograph below. Also shown in the photograph is the appearance of the sign recently proposed to the Downtown Design Review Board. The covering over the sidewalk, which erupted into an online and media controversy this summer is still in place. Rick Dover originally told me in June he hoped it would be around thirty days from when work began. I can’t tell that work has actually begun on the facade. All of which is unfortunate for the French Market, which has dealt with the situation on the street with humor on their sign which states, “Oui are Open.”

Starting with the intersection of Clinch and Gay, at the front of the hotel and heading south for two blocks, construction cones, barricades and fencing mark the street and sidewalks. Each of the intersections are being shifted from brick, which has been very difficult to maintain, to stamped asphalt. I’d somehow gotten the impression it was to be shifted to stamped concrete as the rest of Gay Street is concrete. I was told it will be stained to more closely match the color of the rest of the street.

The intersections have also been changed to have bulb-outs in front of Clancy’s and the East Tennessee History Center. This restricts traffic at that spot to two lanes, which makes crossing the street a bit more safe. Also changing in the intersections is the curb at each corner, which have been made more handicap accessible.

Finally, work continues on the 700 block, but seems to be nearing an end, with the most difficult portions of the work done. The sidewalks look good and, I think I understand that the fencing should be gone in about a week. The lights will then be returned and trees inserted into planters, completing the project. The stamping of the intersections will be the final act.

Three doors north of the Farragut Hotel is the former location of national chain, Lenny’s Subs. I previously reported that the new tenant will be Potbelly Sandwich Shop, another popular national chain. There are over 400 franchises located across the country and the company has won awards for their sandwiches. This will be their second location in Tennessee, with the first located in Nashville. The group also went before the Downtown Design Review Board this month and their design is included above, showing, among other things, the design for their blade sign. Seems those are becoming the defacto standard for signs along Gay Street.

Off Gay Street and onto Market Square, the shop replacing Impeccable Pig is Tailgate. I assumed it to be a Vol store, given the orange logo, but it turns out the company is agnostic regarding sports teams, though this one, I assume will focus on the Vols. Tailgate is actually a subsidiary of American Eagle and the clothing, representing many sports teams, carries with it a bit of the American Eagle style.

I’ve mentioned it in this space before, that one of the great retail mysteries of downtown, to me, has been the absence of a place to buy Vol gear. I think about a million dollars might have been made at such a store just last weekend. It’s surprising that a local entrepreneur didn’t see that opportunity and grab it before a chain store came in to fill the void.