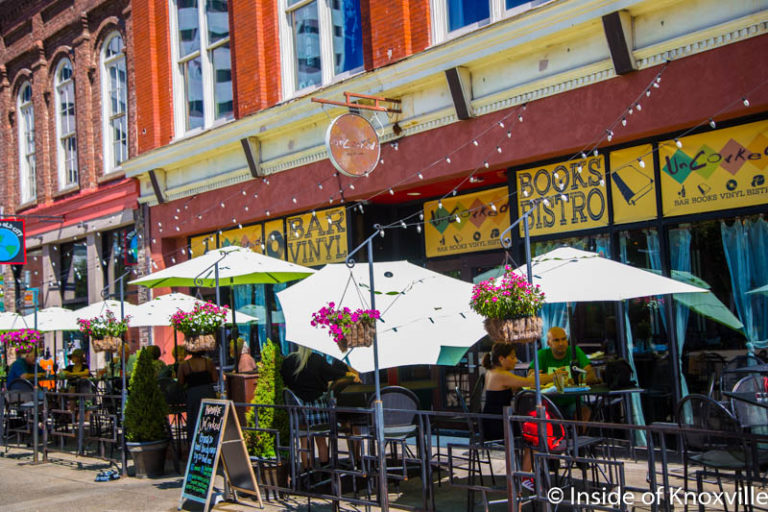 Uncorked has enjoyed a long run on Market Square, seeing numerous changes both internally and on the square around it. Some of us have a hard time not referring to it as “Oodles,” which was part of its original name. Restaurants evolve and the “Oodles” portion of the name was dropped last year in favor of the simple, “Uncorked.” And, while the restaurant has traditionally featured an Italian menu to compliment its large wine selection, that has recently changed, as well.

Changes this summer include the addition of vinyl LPs and books. It may seem like an odd move for a restaurant, but the idea is pretty cool and – especially for those of us who love both vinyl and books, it’s a comfortable space to enjoy. The books are curated by Scott and Bernadette West and are available for browsing while visiting the restaurant or for purchase. The vinyl is supplied by Jay Nations of Raven Records and Rarities, with over 300 records available for in-store listening and about a thousand available for purchase. Jay makes sure the selections stay fresh by rotating about 100 albums each week.

One of the features of Uncorked, which I’ve always appreciated is the range of seating areas. If the weather is good, I love the patio with colorful umbrellas and a perfect view of the square. It’s where Urban Daughter and I hung out for most of the Dylan Birthday Bash this past June while we enjoyed my favorite downtown cheeseboard. If the weather isn’t so good, patrons have a choice of the main bar or the smaller bar areas at the front of the bar and bistro. Each have a view of the square and a turntable to play the vinyl, while one side features hundreds of inviting books.

The central portion of the restaurant features an “indoor courtyard.” I’ve enjoyed many wonderful conversations at the small tables in the front of this area and good times with friends in the rear. It feels like being outside without the cold/heat or rain. The rear portion of the interior courtyard is also home to a fine collection of Cynthia Markert paintings and features a view of the hustle and bustle of the kitchen.

But there is more going on here. In addition to books, vinyl and a great wine selection, chef T.J. Smith is making changes to ensure the food is also a draw. T.J. may be the friendliest chef in the city and he’s also very talented. According to an article at Scruffington Post, much of his early experience came working under Chattanooga chef Tho Nguyen who brought his Vietnamese heritage and intimate knowledge of French cuisine to the table. “His time in Knoxville includes a stint with Bonefish Grill. And earlier this year, working in tandem with former Blackberry Farms chef Jeff Carter, Smith won a Knoxville Iron Chef competition sponsored by U.S. Foods, taking top prize over a handful of other talented chefs in the area.”

More recently, T.J.’s warmth, patience and talent has converted Market House Cafe at 36 Market Square into the increasingly popular spot it is today. Getting off to a rocky start early this year, T.J.’s steady hand and culinary guidance improved service, efficiency and food quality there. It’s become such a favorite spot for Urban Woman and I that we weren’t particularly thrilled to hear T.J. was taken from there to man the helm at Uncorked. Fortunately, the qualities he instilled at Market House (where he continues some involvement) have persisted, even as he turned his primary focus to Uncorked.

We had dinner at Uncorked last week and enjoyed the crab dip, which is a long-time favorite there, but which had disappeared for a while. Karen order skewered bacon-wrapped chicken and I ordered T.J.’s version of shrimp and grits. He told me he tasted the dish in a number of different restaurants and decided he wanted to do something different. He formed grit cakes with cooked grits and then fried them before pairing them with the shrimp and his sauce. The result is maybe our favorite shrimp and grits dishes anywhere. Both dishes were excellent, but that little crunch on the exterior of the grits paired with the creamy goodness inside was pretty special.

Uncorked will continue to be one of my favorite spots to meet friends for a drink or a meal. If it has been a while since you’ve tried it, you may want to circle back around and see what you think. I believe you’ll be pleased.