A Dopo Pizzeria Set to Open Next Week 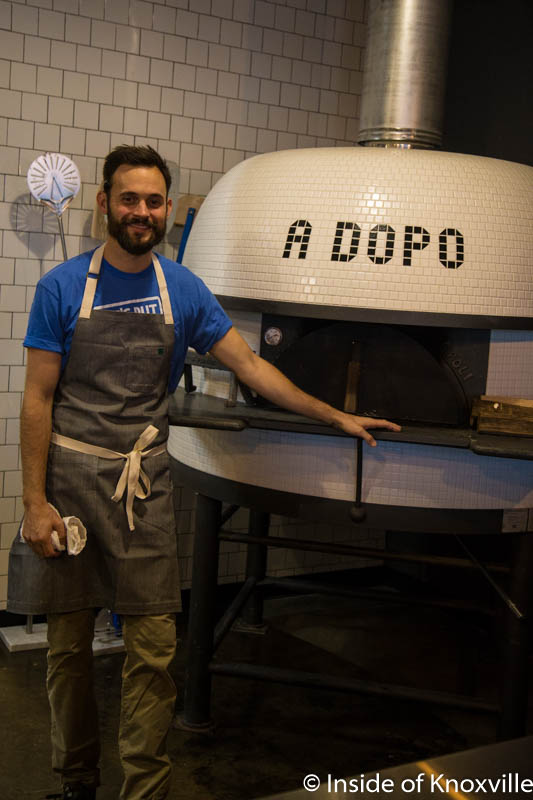 When last I checked in with Brian Strutz, he planned to open A Dopo pizzeria, his sourdough, wood fired pizza restaurant at 516 Williams Street in August. He missed the mark by a few weeks, as is virtually always the case for new businesses. While nothing went horribly wrong, there were hiccups along the way, like the day the oven arrived and amid all the excitement, the discovery was made that it would not fit through one window as they had hoped. Three removed windows later it was placed inside the restaurant. The bigger picture is that Brian has found many, many people to be helpful as he prepared to open, from understanding landlords to helpful inspectors.

The transformation to the space is spectacular. While retaining the industrial feel of the former paint store, the place has become quite beautiful. And it is very rooted in its neighborhood. The white oak, oil-finished tables were built by Forrest Kirkpatrick at Fork Design, which is located in the same building, just around the corner. Local artist Johnson Giles painted the sign on the front of the building. The prep table in the kitchen was donated by Dustin Busby with whom Brian worked for two years at Blackberry Farm after his return from Italy. Richard Foster of the Lewis Group drew the plans and Jim Hickman served as project manager.

The concrete counter tops, marble dough station and the greeting host/hostess station were built by Justin Paulk at Paulk and Company just next door. A geometric light fixture hangs in the center of the room as a tip of the hat to Brian’s friend and hair stylist Jeremy Wann at Geo Hair Lab whose business is visible directly through the fixture from the kitchen. The floors were sealed and finished, but Brian made the decision to leave the paint splatters on the floor as a reminder of the building’s roots.

He plans to carry the thoughtful approach through to the food he serves. Beer and wine will be served on tap, while each are also available by the bottle. Brian found kegs for both which are collapsible and recyclable. All wine will be Italian wines which pair well with food – and he hopes you’ll find some vintners and varietals you’ve not tried before. Selections were guided by Amanda Lovingood, a level two sommelier who attempted to keep bottles under $30, with less mark-up than you might expect at a restaurant. You’ll find local craft beer from Last Days of Autumn and Blackberry Farm, as well as Yee Haw from Johnson City. Both sparkling and filtered water will be available for no charge.

The sourdough pizza will be wood-fired with four selections each featuring red sauce and white sauce, with “extras” to personalize your meal. Additionally, four vegetarian pizzas are available, as well as cheese and meat plates. The meal may be topped off with four flavors of house-made gelato. The espresso flavor will be a staple, with espresso provided by Remedy coffee which is just a couple of blocks away. You’ll also find pistachio (made from scratch) and two seasonal flavors. I sample the espresso gelato and loved it. The menu as pictured here is “95%” settled.

The restaurant will have seating for approximately forty, with two communal tables and several single tables in the center of the room. At least initially dinner service will be provided and a host will seat patrons. As the web site says, you may find yourself, “seated next to another wonderful person like yourself.” You’ll be served by a dedicated, carefully chosen staff who Brian says have been empowered to make certain customers have an excellent experience.

An event for family will be held this Thursday night with soft opening Saturday and Sunday with two seatings each night – all of which are now filled. The restaurant will officially open Thursday, October 6, with the regular schedule of 5:00 PM – 10:00 PM, Tuesday through Sunday beginning at that time. The restaurant will be closed on Mondays. Brian said he is committed to staying open later when events are held at the Mill and Mine or the Sanctuary and he’ll respond to customer preferences for hours in coming months. There will be no reservations and customers are welcome to drop in. If you’d like to avoid a wait, there’s an app for that: Nowait, which allows people to get in line remotely and sends a text when the table is ready. So, you can get in line from anywhere within twenty miles, or you can get in line on Nowait, park and walk over to Public House or Crafty Bastard to enjoy a beverage while you wait.