Dogwood Arts Finds a New Home: And You are Welcome 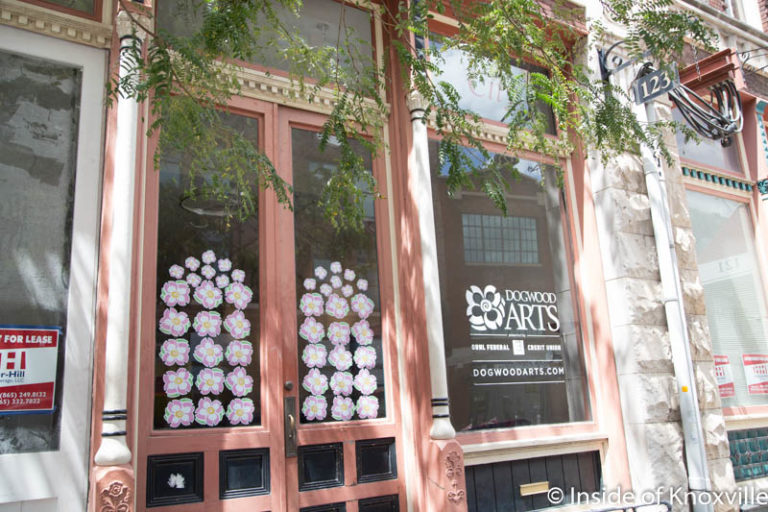 Dogwood Arts recently moved into new offices and invited the public to see the new space with an open house on First Friday. It’s something they could not have easily done in their previous location in the Burwell Building. While it’s cool to be located over the Tennessee Theatre, access was limited to those with the code and that doesn’t make for a welcoming space. Executive Director, Tom Cervone, wanted a more visible presence for the venerable institution – and more engagement from the public. He’s out to dispel the notion that Dogwood Arts is something that happens each spring before disappearing for the rest of the year.

Born in Buffalo, New York, Tom moved to Pittsburgh at age 8 upon the death of his parents and was raised by an aunt and uncle in that city. He played baseball and did other things a young boy will do, but it was his role as an altar boy, starting in fifth grade, that had the biggest impact. He didn’t join the priesthood, rather, he recalls it fondly as the first time he was given a costume, memorized lines and learned about blocking – all with a performance each weekend.

Fascinated with the world of art, he attended Liberty State College, a fine arts school, where he feels he received excellent training in the arts. Except for a brief stint in human resources in Pittsburgh, he’s focused his career on acting and other arts-related endeavors. In 1989 he moved to Knoxville and obtained an MFA degree and in 1995, due he said to his business background, he became the Business Manager of the Clarence Brown Theatre, later becoming General Manager and in 2012 the Managing Director.

He enjoyed his years with the Clarence Brown including, particularly, the acting and theater history classes he taught. When the economy became more difficult, he understood that the theater needed to become more financially secure and he took sixteen months to complete his MBA by 2010. While acknowledging that it was difficult forcing his right-brained personality to pursue a left-brained activity, he calls the degree and the classes “transformative.” With a new vision of how to run the non-profit more like a business, he created Clarence Brown’s first endowment program.

When the Tennessee Theatre asked him to interview for the Executive Director position, he agreed and served in that capacity for eighteen months. He missed working directly with art and artists, however, and after a brief return to UT, he learned that Lisa Duncan had resigned as Executive Director at Dogwood Arts, he applied and was hired to fill the position. This month marks a full year on the job, or as he said, “I’ve lived the entire calendar from the film festival to the Dogwood Arts Festival.”

And he wants Knoxville to know the organization  is a “twelve month celebration of art and culture and natural beauty in our region.” It’s been true for some time, but public perception has lagged. The calendar he referenced includes the various dogwood-related celebrations in the spring, of course, but they also include Rhythm n Blooms, the House and Garden Show in February and the year-round Art in Public Places Program.

More immediately, the group is preparing to execute one of their largest efforts of the year when the Knoxville Film Festival is held next week, August 26 – 28. The three day celebration of independent film-making in Knoxville will be held at Regal Downtown West Cinema 8. Narrative and documentary shorts and features are included as well as series and a special category for Tennessee films. You’ll find a list of featured films here. “Clinton 12” will receive its first public screening in Knoxville, which is an exciting inclusion. August 27th happens to be the 60th anniversary of the integration of Clinton High School. You’ll also see Chad Cunningham, winner of last year’s Seven-Day Shoot-Out, present his first feature-length film.

And now, you can drop in and meet the folks at Dogwood arts, yourself. Located in a building at 123 W. Jackson, owned by Tim Hill (who was instrumental, along with Jay Cobble in getting the group into that address), they are easily accessible and welcome visitors. They are also excited to be on the footprint of Rhythm-n-Blooms. You can buy a t-shirt or a Rhythm-n-Blooms poster while you’re there. Or just say hello. They need your support and will soon be enlisting new sponsors and launching new fund-raising initiatives and an endowment campaign.

You can hear more with Tom Cervone on Knoxcentric: Powered by Inside of Knoxville this Sunday morning on WUTK, 90.3, at 10:00 AM.