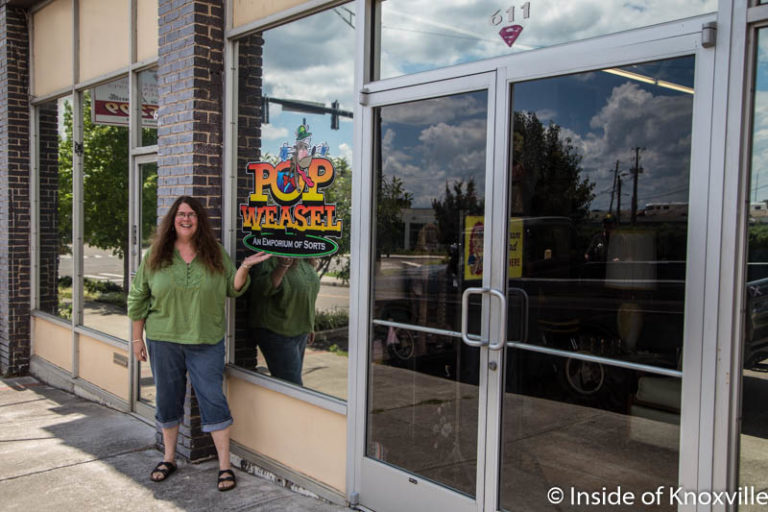 It’s hard not to get excited when listening to Gina Alazawi talking about pop culture. Her passion, which started at a very young age, has only grown and is reflected in her new business, Pop Weasel Emporium at 611 N. Gay Street. In naming the business, she thought of the weasels in Roger Rabbit and loved the idea of the character in the logo having his mind blown. She hopes to blow your mind with what she has in the new shop.

Born and raised in Knoxville, one of her first toys was an old doll which had belonged to her mother. It had a crack and she “took care of” the injured baby and that led to taking meticulous care of all her toys – many of which she still owns. Ebay showed her that old toys, collectibles and pieces of pop culture are valuable to the right people. And so she started collecting and selling objects she found fascinating. You’ll find objects as wide ranging as a human spine  – which someone actually walked in the door to offer her – to an anatomically-correct, life-sized model all the way to couches and chairs – many of them mid-century modern.

She started working the business right out of high school, operating booths at Esau’s Vender Market at Chilhowee as well as other flea markets. She also started out separating her items by decade, but now has them all mixed together. Walk in and she can tell your age based on what you get excited about in the store. Ultimately, she wanted her own business and she tells me she could stock her current space ten-times over with the memorabilia and other objects she has collected.

As she expanded the items, she was always on a quest to find collectible objects in pristine condition. That led to sales, because she accumulated duplicates. She has items from the “dark side,” though hers are more whimsical than scary. She collects in random directions, you’ll find a complete set of Beatle’s bobble-heads ($500 for the set – complete with instruments), Mork and Mindy Dolls, black velvet Elvis and foam fingers which sort of became a thing suddenly when Miley Cyrus, well, she, um. Google it.

She has some memorabilia which can be controversial and she says she keeps it sort of stewing until she feels the moment is right. For example, she had a Michael Jackson doll which she put away when he died, rather than cashing in on his death. She has a Saddam Hussein doll, though I would have loved to be in that brainstorming session when a toy maker said, “I’ve got it! We’ll produce a Saddam Hussein doll! She’s also got an Obama doll and she’s currently on a Kennedy memorabilia jag, which all started with one item – a coin – which intrigued her. Her best find in that line so far is a JFK figure in a rocking chair, still in its original package.

In addition to the human spine which was carried through the door, she’s had caskets and once had a 78 RPM Elvis record. That one landed her on Antique Road Show. She has bought and sold on Ebay, but her preference is to meet the person with the item or the person who wants it. One of her great pleasures is learning the stories that come with the items, as well as the stories of people who discover items in the shop.

She points out that, “to sustain yourself in this business, you have to know what you are doing.” To that end, she took business classes and worked with a counselor at the Chamber of Commerce. She also took accounting classes at Pellissippi State. She opened her first shop in Clinton, then moved into Knoxville, ultimately landing on Gay Street. She glows when she talks about that last fact. “To be on Gay Street . . . I am very proud as a local person, that I own a business on Gay Street. I want to make my city better.”

She’s actually leased the space for the last two years, using it as storage. The time to open a business in the location seemed to have arrived. She’s just outside Emory Place and near some of the very cool businesses which have opened in recent months including Remedy Coffee, Maker’s Donuts, Crafty Bastard Brewery, GEO Hair Lab, A Dopa Pizzeria (opening soon) and Justin Paulk’s Paulk and Company, which I profiled yesterday. And more new businesses are on the way.

She’ll be open Wednesday through Saturday, noon to 7:00 PM, though she points out she’ll stay open later and open on other occasions if an event is happening. She mentioned that a wedding and reception was held recently at The Sanctuary (formerly the First Christian Church) and, noticing all the people, she threw her doors open for a couple of hours and produced some good sales.

The grand opening will be this Saturday to coincide with the Emory Place Block Party and will run from 2:00 PM – 9:00 PM. You’ll see a “fancy tent” out front with the fine folks from Kbrew serving up the goodies underneath. Regular hours will start next week, but if you want to know when those special hours pop up or when super cool items arrive in the shop, “like” them on Facebook and follow them on Instagram. And I’m curious to see who’s going to read this and try to buy that spinal column. Check her out this weekend.