﻿First Friday in November fell at the end of the week that included Halloween which, of course is related to and around the time of other various holidays and traditions, most of which have to do with the dead such as the Day of the Dead celebrated in Mexico among other places and All Saints Day celebrated by many Christian churches world-wide.
﻿

﻿I encountered my first spooky sight on Market Square where fortunes were being read by multiple fortune tellers. I had an encounter with one such lady when I was a child that scared me forever. It’s a story for another day, but suffice to say I gave the booths a wide berth on Market Square that night.
﻿

﻿All wasn’t spooky: Rodney Alexander was on the stage playing his saxophone with Jack Wolf and they sounded great, as always. Dogs, such as the gorgeous one pictured here ambled about pulling their owners along. I’ve already described the furniture and other wood-working on display in the Emporium.

﻿But then there was the display in Casa Hola. I finally met Coral in person (we’d chatted online) and she gave me the thumbnail sketch of the Dia de los Muertos or Day of the Dead celebration. Graves are decorated, memorials such as the ones on display in Casa Hola are constructed. The objects each have meaning, symbolizing something about the person who is diceased and, often, the family’s story is included as well.

Coral had stories to tell about the people behind the displays, as well. Casa Hola tries to help strengthen the Latino community and some people look to them as a lifeline as they try to build their careers or find a foothold in an environment that is often foreign to them. Their support is, no doubt, critical to many. I’d encourage you to go by the Emporium and get to know these joyful, wonderful people. 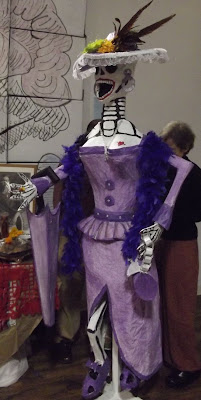 ﻿I think the displays are probably gone by now, but I’d say you could catch them again next year. I’d encourage it. They aren’t near as scary as fortune-telling ladies.﻿﻿﻿﻿