But before they exploded I had a set of misadventures and near-misadventures. I reported here that they would give a roof-top concert beginning at 10:00. This was pretty exciting to me because I really love their live show, I hadn’t seen the roof-top at Preservation Pub since it was opened and besides, doesn’t it make you think of those iconic shots of the Beatles atop Apple Studios? OK, I’m probably alone on that one. I did wonder how they would get around the sound ordinance.

At the door I was told the cover charge was $3. Not bad. Then the fellow asked if I was going to the rooftop. Of course I was! Why would I miss the concert, right? So, he told me in that case it would cost me a $5 cover charge and I would be asked for another $15, which would also get me two beers, before being allowed onto the roof. Now the cost was getting steep, and I can’t stand beer, but I was in. I didn’t want to miss this. I paid the next guy $15 and walked out into the night sky of Knoxville.

It was pretty cool though, as you can see in the photograph above, I couldn’t figure out how to take a picture of it. Despite the cool factor, I quickly realized my mistake (though not quickly enough to preserve my life savings): The only thing happening on the top was a meet and greet with the band. Now I like talking to musicians, but really what am I going to say to these guys? “I really love your music, man.” No. So, I walked around taking in the views from every direction.

I fell into a conversation with a twenty-eight year old recent UT graduate who pointed out that nearly every building in sight was missing a few lights, giving us “First Bic,” and so on. Chris told me he is moving to Atlanta. Knoxville is just a college town. He dismissed my alternative opinions as irrelevant. Washington D.C. came up and I allowed as how I think that’s a great city to visit. He assured me it was a rat hole. Seattle seemed to be the only city worth anything. I asked him why he didn’t move there and he said because he was moving in with his Dad in Atlanta to save money since he’s unemployed. I wish I knew as much about the world, life and Knoxville as Chris. 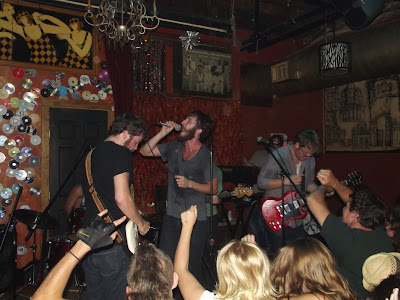 I decided I preferred the smoke on the first floor further erudition at the hands of my new twenty-eight-year old friend. The concert was supposed to start at 10:00 and by then it was nearly 11:00. There was a guy on the stage who turned out to be the opening act. His songs seemed confessional and emotive and totally misplaced before the unappreciative patrons. 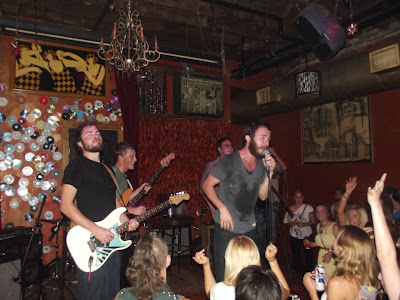 While waiting I met a guy who said he was from Denmark. In short order he told me he was gay, drunk and he loved Berlin and Amsterdam, though he saw many cute people in Knoxville. He kept grabbing my hand, pushing his face close to mine and bugging his eyes like he would mesmerize me. He placed his hand in the air hovering just over my head. I’m not sure if he wanted to pick me up or put a spell on me. At first he said, “Oh you are going to be so easy.” Later he said, “You are just such a buzz kill.” I hated to give up my spot beside the stage, but suddenly had a longing to be on the terrace with Chris. As soon as he said something to the cornered couple beside me, I ran. 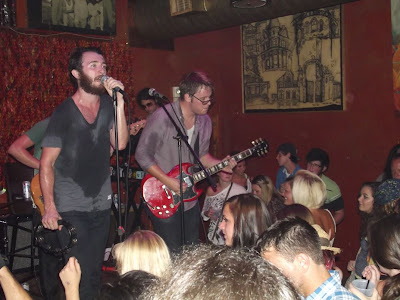 After catching my breath and plotting how to avoid the guy from Denmark, I returned downstairs. Very soon the band was setting up and lining up the shots and beer which seem to be an integral part of the show. Whereas the entire end of the bar was empty during the first artist, a loud, excited crowd built in anticipation of the second act. By around 11:30 they began playing. 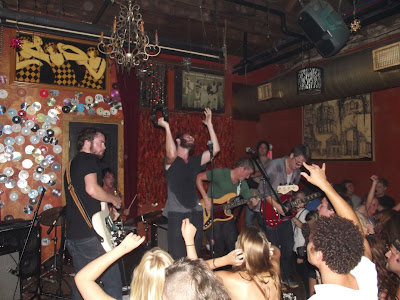 What followed was an hour and a half of a loud, high-energy free-for-all. Lead singer Will Horton’s on-stage persona reminds me greatly of Chris Robinson of the Black Crowes, which isn’t a bad pattern to pursue. The music which has always been a wall-of-sound blend of blues and southern rock seems to be changing slightly. I kept thinking all night that they were reminding me of a band I’d never thought of before in connection with them. I finally got it: The Black Keys. I think they did a Black Keys cover late in the show. They were on fire and the crowd was with them all night. They finally stopped around 1:00 AM, but the crowd wanted them to keep going.
It was a bit jarring a few hours later to see Will waiting tables at Oodles Uncorked. The band is trying to stay on the road and apparently they don’t make enough to cover the expense, hence the meet-and-greet at Preservation Pub and waiting tables at another West owned establishment. It’s nice of them to support young talent.

One more thing: at one point they brought a very talented guy onstage to play a lap slide guitar. It was a very welcome addition to the sound. Even though they have a big sound, they need a star instrumentalist. No one is really capable of a great lead break and they need someone who can handle those duties, whether it be the guy who sat in or someone else. Until then, they are a very fun band to hear, but a small piece required to reach next level is missing.

The Black Cadillacs Promo from Brett Lorenz on Vimeo.