Bill Lyons Gets His Due – on his Birthday

Last December, then Mayor Haslam designated the pavilion on Market Square as the Bill Lyons Pavilion on Market Square, but it was left until today, Bill’s birthday, for the unveiling of the plaque that will permanently note the fact. Bill was not in the loop, but friends, family, neighbors and co-workers (many of whom fall into more than one of those categories) gathered in a light rain to surprise him. The crowd included his wife Gaye, daughter Laura and son-in-law Jamie, neighbors Harvey Smith and Karen Kluge, friends Andie Ray, Noel Hudson, Finbarr Saunders, Cynthia Moxley (who tweeted frp, this event, but blogs at Blue Streak) and Allen Carmichael among others.

Following office tradition in the Mayor’s office, the person having a birthday is taken out for ice cream. Today, on the way to ice cream something else happened. At first Bill, who is always friendly noticed some of the crowd and began speaking to them, only to realize that this seemed a bit too many of them gathered at one spot for it to be a co-incidence.﻿

In front of an appreciative crowd of well-wishers, Larry Martin (Senior Director of Finance and Deputy to the Mayor) said a few words and the bronze marker was revealed. After a number of photographs were taken the crowd joined in a rousing version of “Happy Birthday.” Amidst the congratulations, as the crowd began to disperse, I think I heard Bill say, “Now about that ice cream . . .”

For those of you who may not know, Bill is the Senior Director of Policy and Communications for the City of Knoxville. He has a PhD from the University of Oklahoma in Political Science and has held a number of positions at UT since the mid-seventies, including Head of the Department and Professor of Political Science. He has won numerous awards from UT and his peers and has often been recognized for his community service. Bill is also a downtown resident and, if you are still not impressed, I’ll seal the deal: he can quote the entire last verse of “Mr. Tambourine Man!” 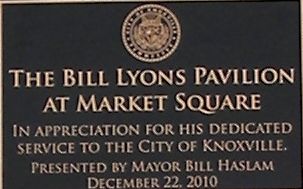 Congratulations Bill. Sometimes nice guys do win. Your service to Knoxville is very much appreciated.