Rhythm and Blooms on the Cheap

Rhythm and Blooms is a part of the Dogwood Arts Festival and given that it involves music and downtown, any reader of this blog would reasonably expect that I would be all over it – but it got complicated.

The first night of the three night event fell on First Friday. Immediately I was conflicted. With more great events, exhibits and general fun than I could possibly take in simply because of First Friday, could I also incorporate a music Festival that night? Saturday offered a free night on the stage -which conflicted with the other shows presented mostly in businesses around the square. Sunday the music moved out of downtown and continued past the official time I don’t need to be out during a night before a work day. But Sunday also included my favorite act of the weekend: The Felice Brothers, whose most recent album, Yonder is the Clock

, is brilliant fun – in their inimitable sick sort of way. One day was twenty dollars and all three were forty. What to do?

I went for free. I enjoyed First Friday and missed the music that night. Saturday I spent with family – including joining the crowd for the free portion of the festival. Robinella and the CC String Band and Scott Miller played the Market Square Stage for a crowd of several thousand. I enjoy Robinella (I just got “Fly Away Bird

” and it is one of her best) and I enjoy the Black Lilies (Cruz Contreras’ – the “CC” in this context – band – you CANNOT go wrong with their latest, 100 Miles of Wreckage

). I didn’t imagine, given the divorce, we’d be seeing them play together again. Could you get the band back together after a divorce? I don’t think I could do it. I couldn’t imagine what must be going through their minds (and those of their new partners if they have them) while they not only played the old songs, but added a rendition of “Jackson” including those lyrics about getting “married in a fever.”

Equally amazing was that they sound better than ever together. I heard them together probably four of five times before and I believe they were smoother, tighter and more listenable than they’ve ever been. Robinella was a bit muted (a good thing, sometimes) and the band played impeccably. Ironically, the song that got the crowd excited was “Islands in the Stream.” Both young and old (see the pictures) belted out the chorus every time it came around. Again, maybe it’s just me, but that was an awful song when it came out. How in the world has it remained popular? They also did a string band version of “One Love,” which was pretty cool. 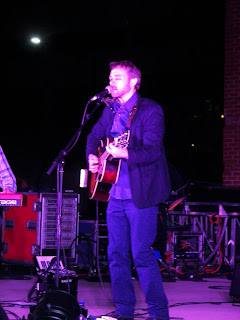 Scott Miller played quite a mix of music. I’ve let some of his recent music ( his latest is For Crying Out Loud

) slip by me, which probably explains why I only knew about half. He continues to write songs about history and one new one he tried out on the audience, a song about the battle of Fort Sanders, fell  flat. If a song about Fort Sanders falls flat in Knoxville, it probably isn’t ready for prime time. Otherwise, his set was great and he remains one of the very best and probably the most intellectual of the songwriters to come out of Knoxville.

I also caught the tail end of the Daryl Scott show at John Black Studios on Union Avenue. The back door was open so we could hear the monitors perfectly. His voice continues to be a thing of beauty even as he ages. I thought the pictures turned out to be interesting. Can you guess my special technique?

I decided not to attend the Sunday show for all the reasons listed above. So, I paid nothing but got a sampling of the music. It was certainly worth a forty dollar ticket and if circumstances are different for me next time I’ll probably plop down the money, but for this year, cheap was about perfect. Until then, keep checking the festival calendar for more great events. This weekend Market Square and Krutch Park are full of booths of crafts. Today promises to be the prettiest of the three day event, so why not come down and check it out?