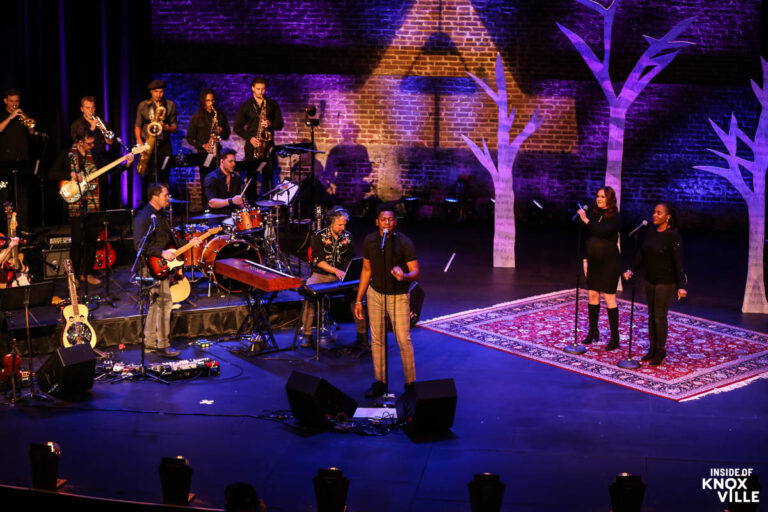 The Appalachia Sessions might remind some of Austin City Limits, while locals with a bit of a memory might recall the iterations, first at the Bijou, then the Square Room, and later at Boyd’s Jig and Reel, of Tennessee Shines. The new series, scheduled to run for ten shows, features live music performances by multiple acts backed by a house band, interspersed with interviews of the artists and others. It’s filmed at the Bijou in a two-to-three hour session and then edited to a one-hour televised show, which is shown locally on WATE two-to-three weeks after filming.

The proceedings are hosted by Knoxville’s own Chris Blue and the band features an A-list of Knoxville musicians. While the band and Chris are from Appalachia, not all the performers hail from here, but generally have some sort of connection. The series promises a range of genres, but leaned on country and bluegrass at the filming I visited. Behind the series is the East Tennessee Historical Society and executive producer Breezy Wynn of the Wynn Group.

The series, is defined by its mission as a “social impact and purpose-driven initiative to bring the history of Appalachian music, culture, and education to students who are directly impacted by its history.” The audience includes students who are brought in for the taping from rural and more impoverished surrounding counties and inner city students facing similar levels of poverty.

For the filming I attended, students were first gathered for a tour of the East Tennessee History Center, followed by a tour of the Tennessee Theatre. Some were interviewed on stage, and all are encouraged to connect with a mentor through the Mentor Monster program which involves school-aged children reading to and mentoring younger children. It’s all about role-models whether through a mentor or seeing working musicians from similar backgrounds to their up on the stage.

Partners for the series include the Elgin Children’s Foundation, Thrive Knoxville, WATE, and Pellissippi Community College. Any proceeds generated benefit the Appalachia Sessions Fund to support student literacy and education in Appalachia.

The filming I attended was the second in the series, the first being a Christmas show which has already aired and you can view below. It was fun to see the first takes and sometimes second and third takes of introductions, interviews and songs and to imagine how it might all come together.

I couldn’t help but feel a bit nostalgic, as it did remind me of the original Tennessee Shines shows somewhere around 20 years ago. It was there I first saw Cruz Contreras behind the keyboards performing (for their initial show, I believe) as a member of the Black Lillies. The nostalgia was further fueled during Robinella’s set when every photo I took of her included Cruz. Those with local memories going back to the nineties will remember when Robinella and the CC String band were the hot band-around-town. It was nice to see them on stage together even though they’ve gone their separate directions in the years since.

All the sets were good and the Crockett Band was great all night Chris Blue can really belt it out. Keller Cox stepped in from Texas for a set and shows a lot of potential. The Grammy award winning Appalachian Roadshow presented the most recognizable connection to the region while giving short educational intros to their song. Robinella shared her unique blend of country music with jazz stylings and she and Chris sang together for a couple of songs including “Shallow,” made popular by Lady Gaga and Bradley Cooper in A Star is Born.

The episode should air January 31 on WATE. Passes to the show are available through the website Appysessions.com. A-List members received guaranteed seating, and other benefits, by becoming a sponsor of the program. General admission passes are available free by signing up to be an A-Team member. A-Team members will receive an email approximately two weeks prior to the next live event explaining how to acquire free passes.  Additional free passes may be available through local radio promotions or social media promotions on the Appalachia Sessions’ and East Tennessee Historical Society’s social media channels.

Check out the Christmas show below for a better idea of what this all looks like (in edited form) and watch for the next installment on WATE. Complete pictures are also included below.