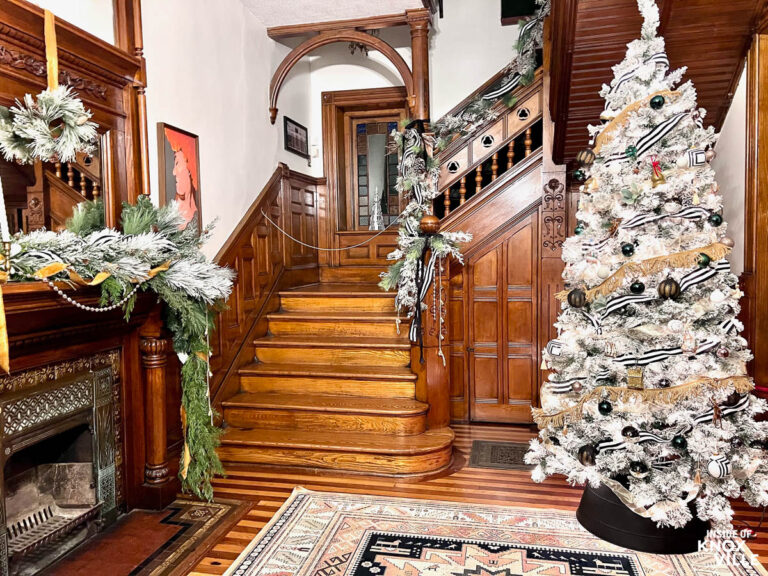 (This is the second part of a two part article by guest writer Heather Ryerson, Part One may be found here.)

The Martin House, also known as the Lou Mar House was built around 1889 by David Getaz, a Swiss immigrant who studied in Paris. It later became the home of William H. Sterchi, one of the founders of Sterchi Bros. Furniture Company.  It is one of the earliest homes still standing in North Knoxville. What began as a single family home, over time, changed hands and eventually became a tourist house with as many as 14 guest rooms. It later became an apartment house. In the 1990’s, major restoration began and it is now restored to a single family home.

The front porch was wide and welcoming and ushered us into a lovely foyer complete with a fireplace and its own Christmas tree. One of the things that stood out to us as we toured was the ability of the homeowner to honor the history of the home, but also to create their own history in the home. One room featured a stunning mural that incorporates the history of Knoxville and the families’ children and a farmhouse that still stands in Corryton. The detail in this home was stunning.

The Smith home (The Irwin) is a historic Victorian farmhouse built in 1893 by a German family, the Frankenbergs. It was the first house on the block and was surrounded by farmland. It was owned by the Frankenburg family for over 100 years until they sold it in 2000. In 2020, the current homeowner finished renovations and it is now a residence and occasionally open as an inn for visitors. You can find more about the home here. It boasts original stained-glass windows, fireplaces and brass door hardware with a beautiful wrap around porch and a secret prohibition liquor closet.

The King House was built around 1907 and is a craftsman style home with original oak mantels and oak pocket doors. It has original hardwood flooring and built-in cabinets. The current homeowners purchased the property in 2010 and added closet space and a master bath on the primary level. I personally loved the whimsy of their holiday décor and the cheeriness it brought to the home.

The last home featured on the tour was the Lewellen House (which I unfortunately missed). It was built in 1914 and is one of the youngest on the tour this year. It was built with a mix of both Victorian and Craftsman elements. The home was extensively renovated in 2021 and removed a layer of stucco from the exterior that showed a unique double bevel lapped wood siding that is not found in many other homes in the area. They were able to fully restore the original windows and oak floors as well.

Similar to the Fourth and Gill Home Tours offered earlier in the year, this tour lets you in on more of Knoxville’s history with a glimpse of the past, the beauty of the present that the homeowners have curated and see the plans for a future of more beauty to come. Just like the classic story of The Christmas Carol, we learn from the past, live in and serve in the present and plan together for a brighter future. It was exciting to see these elements throughout each home and in the joy of each homeowner.