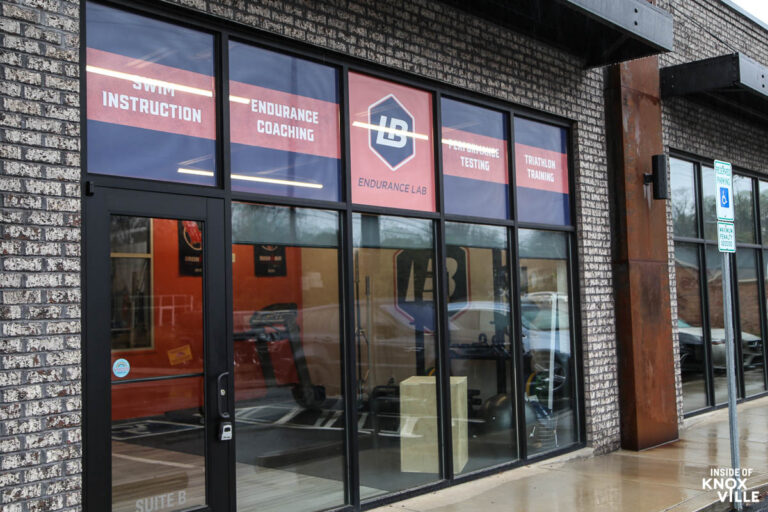 Lana and Chris Burl moved to downtown Knoxville in 2020, intending to open their business downtown at the same time. While that took a bit longer, LB Endurance is opened in March of this year at 1119 Sevier Avenue, Suite B.

Chris Burl grew up outside of Pottsdam, N.Y. “right next to the Canadian border. He was a three-sport athlete in his very small town, playing hockey, football, and lacrosse. His father worked at the local Reynolds Aluminum plant and his mother taught high school math. He attended Clarkson University where he got his degree in Civil and Environmental Engineering.

Lana Burl was born and grew up in western New York. Her mother was an occupational therapist and her father worked mostly for the state of New York, though at one point he owned a bicycle and cross-country ski shop. The sports she most enjoyed then were snow skiing and horseback riding. She taught riding from a very young age and enjoyed competitions in horse knowledge with 4H.

Originally thinking to be a veterinarian, she couldn’t handle the sight of blood, so being strong in math and science, she obtained her college degree in chemical engineering from Clarkson University in New York in 1998. It was there that she and Chris met and became a couple, and they would eventually marry in 2001.

While in college, Chris was playing club level hockey. When a women’s club team was formed, Chris became an assistant coach. Lana joined the team, even though she didn’t know how to skate. Their senior year, Chris became the head coach. About four years after they left, the team would become a division one team and they’ve won four national championships.

Upon graduation, Lana got a job with Nestle in Wisconsin. Chris graduated at the same time and moved with her to Wisconsin, despite his job offer in Virginia. Jobs would dictate several moves after that. After working as a contract employee for a year in Wisconsin for a year, Chris was offered a permanent job with Siemens in Orlando, Florida and they moved their things there only to learn he would be posted in Oklahoma to work on a power plant. After a year in Tulsa, Oklahoma, both working for the company, they were moved to Pennsylvania to work on another plant. A stint in Newnan, Georgia followed.

At that point the Enron crisis happened and new developments in the industry stopped. The couple returned to Orlando, but while Chris stayed there for a bit, Lana returned to New York in 2004 where she obtained a master’s degree in nutrition from the University of Buffalo. Facing the specter of an office job, he elected to move to New York, first with her, then close to Albany and about 4 1/2 hours from Lana, where he worked for G.E.

After graduation, she got a job with Rich Products in Buffalo, eventually accepting a transfer to their plant in Morristown, Tennessee, which is what got the couple to our area. They found the terrain like upstate New York and the couple lived there for four years.

Chris became one of the early adopters of remote work, traveling periodically to Quebec. When his company eventually asked him to move to Quebec, he opted to quit and remotely get his ME through the University of Maryland in Project Management. He began work with Management Solutions, working for them for eight years. She left Rich Products to work for Green Mountain Coffee whose plant is located at the Forks of the River, for a couple of years.

By this time, the two of them had been running triathlons for about five years. When they started, they didn’t own bikes and she was nervous about the water. The two watched DVDS, filmed each other swimming, came home and critiqued the videos and did another round. They did three the first year. They did their first marathon in 2011. They moved on to Iron Man events. Lana began to win events and eventually qualified for the U.S. triathlon team in her age group in world championships in Europe. Her medals are on display at the business.

She quit Green Mountain in 2015 and began consulting, starting Burly Projects, which Chris joined in 2018. By 2016 she was coaching other athletes as they prepared for triathlons. The next year she started coaching master’s swimming and eventually began coaching at Hardin Valley Academy. She works with high level athletes all the way to adults who never learned to swim. She began seeing the coaching as a viable business and formed LB Endurance as a DBA of Burly Projects in 2019.

In 2020, she split off her coaching into a separate business, LB Endurance. He continues to focus on engineering and project management consulting through Burly, while she is the primary force in LB Endurance. After considering various models, for the business, she decided she wanted a physical space where she could always have a space to coach swimming, which led to the endless pool.

She looked at other components that could be added to the business to make it more viable. They approached Eddie Raymond and Kevin Sprouse who owned Knoxville Performance Lab found at that time in Eddie’s Health Shoppes, eventually purchasing the testing services and rolling it into the coaching business.

At their new location they offer VO2 Max Testing, Lactate Thresholds, sweat tests, resting metabolic rates, and INSCYD testing. Many of the tests are available only through them or out of Knoxville. Chris said he traveled to Chicago for his first INSCYD test. They also plan to expand their retail offerings to nutritional foods for swimmers, cyclists, and others. They will offer some equipment not easy to find elsewhere.

While Lana had hoped to open her physical location in 2020, the two feel the delay caused by the pandemic gave them the time to clarify the vision and be more primed for a successful start. It also gave them time to locate a refurbished endless pool, which save them a large outlay, as well as delays getting a new one. Their pool is more designed for endurance swimmers who spend large amounts of time in the water, with lower chemical levels and a lower temperature and, importantly, no one else in the pool.

They are involved in the Rocky Top Multisport Club, the local connecting point for triathletes. It has grown from about fifteen people to around 250. They hope their shop will provide a hub for this group and others like the local cycling and water clubs that don’t have a home. For this reason, they feel south Knoxville is the perfect space for what they are doing. Open water swimmers, for example, utilize Suttree Landing Park, just around the corner. The building is also a hub as other business located in the stretch attract a similar crowd.

Lana provides swim lessons, as well as advanced coaching in the endless pool. It is also helpful for people rehabbing who can do aqua walking or jogging. The pool is available for rental to other coaches and teachers. A primary focus is helping endurance athletes prepare for their events, whether simply developing a plan for training, or continuing to consult throughout.

She has two other coaches currently working under her and plans to add others. They’ve also started offering virtual cycling coaching from your home with two-way video, allowing the coach to give feedback. It works with any bike or apparatus. One coach offers help for long-distance backpacking. With the testing they provide, they are able to very specifically work with people on the tailoring kind of training, eating, and more that each person needs. They believe most people are able to do longer distance, endurance events, given the right preparation.

They expressed appreciation to the Thought Bureau in South Knoxville. for their branding. Reagan Construction did the buildout and D.K. Levy provided architectural support. Epic Wraps applied the vinyl wall coverings found throughout the business. The couple said they’ve all be very helpful, along with the people they worked with from the City of Knoxville. The entire space, including the pool, is ADA compliant.

All services are listed and described on the LB Endurance website. For now, the business is open by appointment either through the website or by phone at 865-935-4161. By the end of this year, they expect some regular hours to be added.