Keys to Urban Economic Development: Trees and . . . Blowing Up Highways?!? 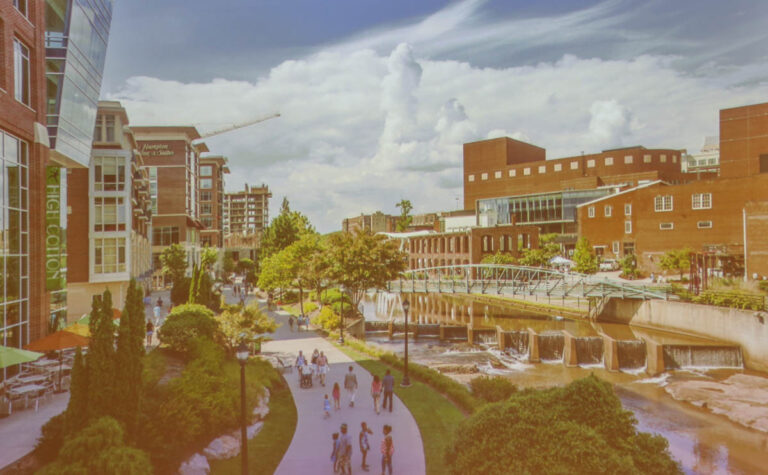 It’s intuitive that a city is better served with more trees, right? But exploding highways as a pathway to urban development? Well, yes, in many cases. It was a topic on the table for conversation recently as Keep Knoxville Beautiful presented their fourth annual Summit, “Urban Reconnection to Nature,” focusing on “sustainable developments in three cities: Greenville, SC, Birmingham, AL, and Baltimore, MD.”

Erin Gill, Deputy to the Major, representing Mayor Kincannon, began the conference by saying in Knoxville, connecting an urban city to nature is “just who we are.” She said efforts are underway to increase Knoxville’s green status, but that she is “proud of where we start with equitable access to parks.

She said that 52% of city residents live within a ten minute walk of a park and that they are more accessible in lower income and black neighborhoods than elsewhere. She also noted that Knoxville’s tree canopy has been reduced by only 1% over the last ten years, leaving the coverage at 39% on average across the city, leaving us above the Urban Alliance recommendation of 30%. The asterisk to this statistic is that while the average is good, much of the canopy counted is on undeveloped ridges, likely meaning many areas fall far below the amount of canopy recommended.

Mayor Knox White of Greenville, South Carolina, a place that has won national awards for livability. The city features its green spaces, including an “amazing” canopy of trees over Main Street, and a reclaimed river and waterfall, along with two massive parks. He said they city focuses on two things in development: Trees and water. Everything else then falls into place. Since beginning that focus in the 1990s, the city has had no shortage of tourists and companies wanting to relocate to the city. He said if you “don’t think that’s a driver, you are out of touch with current” development.

The city built two “large and transformational” parks, Falls Park and Unity Park. Each illustrated a novel approach to some of the issues a number of cities face. As they developed the parks, which they anticipated would be catalysts to development. They emphasized (demanded) mixed-use development and focused on becoming a place where people want to be.

The first park centered on a waterfall on the edge of  downtown. Once a major attraction (about 100 years ago), it had been forgotten by many as it had been covered around 1960 by a four-lane state highway, high on a bridge over the falls. They were no longer visible and some people over the years said they no longer (or had never) existed. But it was there. And cleaner than it had been in many decades, due to the closure of textile mills which had polluted it.

Adopted by the Carolina Foothills Garden Club, the waterfall was reclaimed. A visual for a park was published, which included the removal of the highway. Through a private/public partnership, support grew for the park, despite a contingent which wanted to keep the bridge. Mayor White and the head of the garden club met with the D.O.T. with a simple pitch: Give us the bridge so we can tear it down. She agreed and the location became a ten acre landscaped park with access to the waterfall and topped with a pedestrian suspension bridge.

Mayor White said, “It became the centerpiece of downtown overnight. It moved the center of gravity.” He said to make big things happen you need a public/private partnership, you need to make sure people can see the vision (literally — make visuals), and you need champions. He also pointed out that the county opposed all the plans in Greenville until it became the economic driver it is today and now the county is one of its biggest proponents.

Wanting to build on the obvious success of the tree/water formula, the city shifted its focus just up the river to a blighted area with a long history of systemic devastation at he hands of the city on the face of the black community. Once a large park for black residents (during segregation, it had been taken by the city piece by piece and was now mostly a wasteland of warehouses, junked police cars, a dump, a police shooting range, and a jail for women, among other similar uses.

The city put up $40 million and local efforts raised another $20 million. The black community was called upon to guide the design to make the park what they wanted it to be. It now incorporates sixty acres and was named Unity Park as a reference to the efforts of black and white citizens to undo damages from decades of systemic racism which rendered the property a wasteland. The park honors E.B. Holloway, a black citizen who fought against the park’s degradation 75 years ago in an episode of the city’s history which had been largely forgotten outside the black community.

Predictably, large mixed-use projects featuring million dollar condos began to spring up around the park before the park was completed. The city countered the inevitable gentrification by donating all city properties in the area for the construction of affordable and mixed income housing. The city also included tax-increment areas around the parks to support them.

Cathy Sloss Jones, Chair of the Urban Land Institute of Alabama, spoke of the experience in Birmingham. Her firm developed Pepper Place, a thriving mixed-use development at the site of a former Dr. Pepper plant. They also drove the lighting of Sloss (her great-grandfather) Furnaces, a major attraction in downtown Birmingham.

Her company and others have focused on connecting the wide-spread urban nodes in the previously gutted downtown area. She said Railroad Park in the center of the city completely changed the urban core. They also have massive parks on either side of the city, Red Mountain Park (500 acres) and Ruffner Park (1,000 acres). The city features 750 miles of trails connecting 90 parks.

Her company has had their urban core focus since the early 1980s. They build with a specific ratio in mind of 40% subsidized housing, 20% workforce housing, and 40% market rate in each of their developments. They look for properties and projects that “fill-in, connect, and build a great space.”

Ryan Alston, representing the Baltimore Tree Trust raised the issue of “environmental justice,” the idea that impoverished areas are less green, making them urban heat islands. Her group formed in 2008 with the goal of reaching 40% coverage in the most depleted areas. They found those areas generally correspond to the areas that were redlined in Baltimore through the 1960s. She said “too often the map of tree cover is a map of income and race.”

The group’s staff of 30, which includes 15 people planting trees or performing tree maintenance every day during planting season, considers tree cover to be critical infrastructure, offering cleaner water and air, greenspace, and in the case of groups like theirs, an opportunity for careers in tree planting and care. Heat islands produce high energy bills, higher rates of respiratory illnesses, and increased crime, all issues in inner cities.

In its fourteen-year lifespan, the organization has planted over 16,000 trees removed almost 100,000 square feet of pavement, and they’ve trained 430 Baltimore residents. They’ve gotten better at what they do and their annual pace of tree planting is increasing.

My largest takeaway from the local panel was the importance of our ridges. They largely remain undeveloped and are the reason that most anywhere in Knoxville, trees are visible. Also noted is the fact that most of our loss of canopy occurs on private property where the city has little or no influence. Kasey Krouse, the city’s Urban Forester, pointed out that our tree regulations are thirty years old and in need of strengthening.

So, to speak to the caption, the value of trees is obvious. Is road removal a necessary component for good growth? Well, it is certainly not uncommon and its hard to find a story of highway removal that was followed by regret. Most often a riverfront or city as a whole was rejuvenated (see Chattanooga + eight other cities). Maybe not necessary, but almost always a benefit.

Imagine no interstate through downtown Knoxville. Imagine no James White Parkway, allowing the city to reconnect downtown and the areas to the east. Imagine removal of two lanes of Neyland beside the river and the development of an entire mixed-use development along the river, extending downtown in that direction.

I know. Those are big things. Cue the “yeah, but”s and the off-handed dismissals. There are many reasons they would be difficult, maybe even impossible. But if no one tries, we know those or similar ideas will never happen. The one thread through all the speakers was that someone had a large vision and they pursued them for decades until they came true. Does Knoxville have less vision for big things than other cities? What is our big vision for the future of the city?