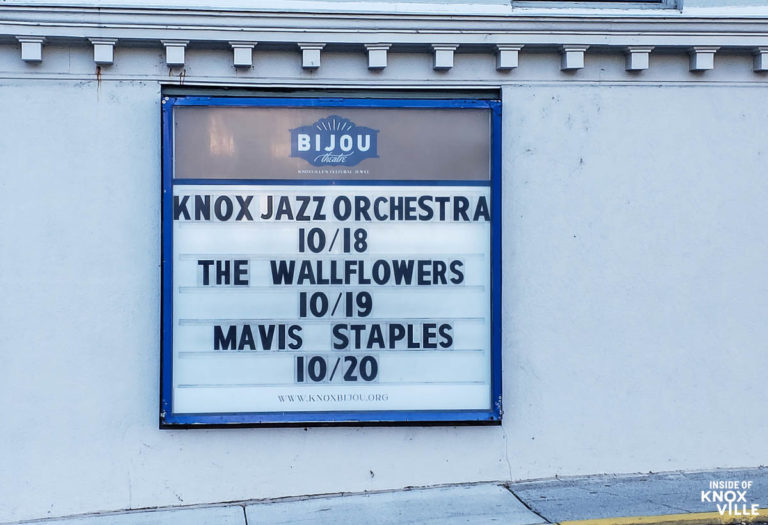 I’m pretty sure I’ve never had tickets to six concerts in a twelve day period (outside of festivals) in my life until recently. With the way tickets are sold these days, of course, you buy them several years in advance (it seems, anyway) and a cluster of shows can sneak up on you if you buy a lot of tickets. That’s pretty much what happened to me and I’ve got to tell you, I love having the joy of live music back in my life.

First, a word on how I attend so many concerts. I’ve had a couple of people recently suggest that I must get free tickets to all the shows I write about. Sometimes that’s true, if I’m taking my camera and shooting the show officially. It wasn’t true of any of these shows (as it turns out, more on that later). Often friends give friends tickets to downtown shows, particularly of events with seasons, like the Knoxville Jazz Orchestra, Knoxville Symphony, or Knoxville Opera. There are inevitable conflicts, and free tickets are given.

My recent run started with three straight nights at the Bijou. After years of avoiding season tickets to most anything, we decided we simply couldn’t help but buy tickets to the Knoxville Jazz Orchestra. We’ve loved a number of their performances over the years — many of which came at the generosity of friends — and decided to take the plunge, snagging front row balcony seats (our favorite). T

Tuesday night, October 18, was the first in this year’s series and it did not disappoint. Guest pianist Eric Reed joined in as the music of Duke Ellington and Billy Strayhorn was spotlighted. It triggered a lot of listening back at home over the next several days.

The next night, October 19, I returned to the Bijou, this time with Urban Daughter, for the Wallflowers show. We probably wouldn’t have gotten tickets, but a friend (thanks Nina) gave us a nudge and we joined a group there. I first saw the Wallflowers at Flamingos on the strip (June 13, 1996) when they were unknown outside Dylan circles. Bringing Down the Horse, which had just been released (May 21, 1996) would become huge, spawning a top ten hit, but that hit, “One Headlight,” didn’t come until February 1997.

The next time we saw them was at the wonderful Hot Summer Nights series (May 11, 1997) on the performance lawn of the World’s Fair Park. What a difference a year (and three hits) makes. The crowd had grown from dozens to thousands just that quickly. The band is now Jakob Dylan and whomever he brings along and the show was phenomenal. The latest album (its over a year old), Exit Wounds, is a stunningly good album that stands well with anything they’ve done. I had not heard it before the show, but I’ve had it on repeat ever since.

Mavis Staples completed the trifecta, also at the Bijou Theatre, and the show was a complete delight. She played only just over an hour, but at 83 years old, it’s understandable. Every minute was packed with great music, much of it dating to her years with the Staple Singers. She was in fine voice (if a little lower on the register than years ago) and got in her political licks, as well. Friends with Dr. King, the family has always been outspoken on political issues. I’ll just say she does not care for the current Supreme Court.

After three nights featuring jazz, rock, and soul music in order, I got a bonus shot of local Americana the Tennessee Sheiks on Sunday, October 22, when I attended the Nourish Knoxville Friends and Farmers event on a farm just outside the city. Their musical style bounces through genres as if they didn’t exist. Later that night came the fourth ticketed event and it was back to jazz for the Nxt Gen jazz series featuring Sam Adams and Margherita Fava at the Old City Performing Arts Center. It was a wonderful night in an intimate setting with about 200 people.

I got a few days off before the next ticketed event. This one did come with complimentary tickets and a photo pass offering the single chance for better photos for this article. Blackberry Smoke was set to play River Breeze and I was excited to use the shuttle and see how it all went. It, unfortunately, didn’t go at all. The band canceled during soundcheck due to technical problems with the sound.

So, no live music? Think again in Knoxville, Tennessee on a Friday night. My friend and I walked to the Bistro at the Bijou where we enjoyed jazz/r&b with Evelyn Jack, featuring Tabor Gables on piano. It was a great way to end the week and wind down. We’ll catch Blackberry Smoke another time.

The final event in the six show, twelve-day run was out of town, but just over the mountains. I took this show in with Urban Son-in-Law, who is a big Billy Strings fan. Billy played three consecutive sold-out shows at Harrah’s Cherokee Center – Asheville. It’s also called the ExploreAshville.com Center, and it’s the place I’ve known for years as the Thomas Wolfe Auditorium, and it is still listed that way, as well. So, take your pick. I’m sticking with Thomas.

If you haven’t encountered Billy Strings, you should check him out. He’s a 30-year-old guitar phenomenon who fronts a string band (no drummer) playing bluegrass and Americana with a large emphasis on extended jams. His massive following of under-40 fans adore everything he does and he’s quite good at it. It is still a bit confounding to me how someone gets that popular in 2022 playing string music with no possibility of a radio hit. I’m not the demographic, clearly. It was a great show in which he altered his songs to fit the Lord of the Rings trilogy, the set was made up of hobbit abodes, and he and the band (and much of the audience) wore pointed ears.

What a run! Even without Blackberry Smoke, there was about as much good music in the run as I could imagine. It ended eight days ago and I’ve already heard the Knoxville Opera perform and I’m headed for the Knoxville Symphony this Friday night (free tickets from a friend who is going out of town, so there you go).

I hope you are having the chance to hear live music or whatever brings you joy. We lost enough of our joy for a long time and I think it’s one thing that made us more angry as a people. Let’s find the joy and lose some of the anger, shall we?