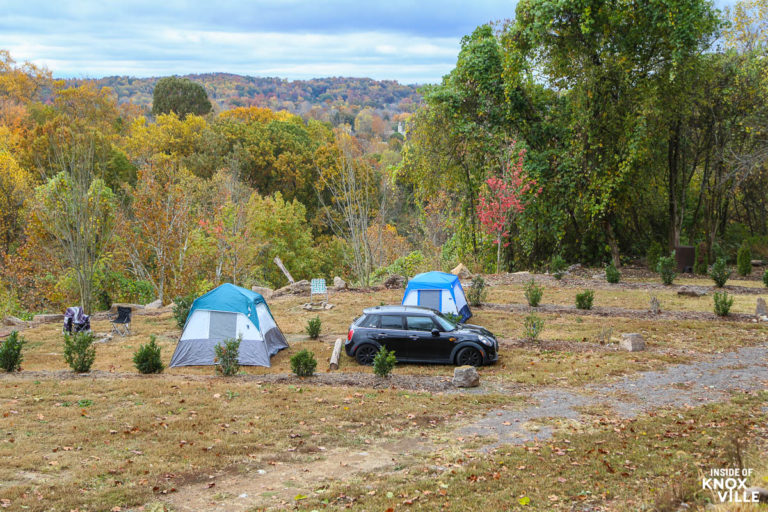 Bobby Smelcer was born in and has lived his entire life in south Knoxville. It’s a fact he’s proud of and, as a result of those years, he knows quite a bit about that part of the city over the last six decades. He loves it so much he’s collected the property that traces his history there, and more. He owns the two homes he grew up in, as well as another couple. He owns the church building where he attended as a child and was later married. It still functions as a church, though for a different congregation.

Surrounding that church and an adjacent home, is twenty-two acres of mostly undeveloped property located just off Chapman Highway and just south of Fort Dickerson. Much of the hillside he owns borders public land and will remain undeveloped. Trails lead from his property to the greenway, which then leads to the Urban Wilderness. Other trails lead to the quarry itself.

He’s dreamed of having a campground on that hillside for decades and he appears near to working out details with the city to make it happen with Camp Quarry Trails. Campsites are ready and amenities are being built. “I always thought this would be a perfect place for a campground because of the quarry.” He bought the first parcel of the larger property in 1997 and has steadily added to it over the years, but adds, “I’ve been in the neighborhood for right at forty years.”

He also owns property in Boyd’s Creek where he built and operates an RV park. He has the equipment and ability to do the construction of trails and campsites because his career has been in excavation, landscaping, irrigation systems, and retainer walls. He’s worked for larger companies and he’s done smaller jobs himself on the side. “I’ve always liked equipment and trucks.” He said it is a family thing, as his father worked in demolition and his oldest brother is “road commissioner for Sevier County and has been since 1982.”

He’s continuing to work on the property. Part of it was industrial and there is debris left from that era, which will have to be hauled off. He’s also stored things he’s come across over the years. For example, he has pallets of bricks that came from a demolition a property near the Old City. He’s repurposing some of those into this project. He’s also waging a war (and making an impact!) on the kudzu situation.

He’s had city officials up on the hillside to show them what he’s done and explain the vision. While there are now allowances in city codes for campgrounds, he’s having to work through, oddly enough, the requirement for a certain number of trees and shrubs, among other things, on the heavily wooded hillside. Sparkman and Associates is helping him with site plans in order to meet city requirements.

There are two primary campsites in the initial phase that are largely ready to take campers now. The two together total about 20 sites, some primitive tent sites and others more suited to sprinter vans, SUVs, and small compact camper vans. There will be no trailers allowed because of limitations with turnaround space on the hillside. He’ll have restroom facilities and showers. As a second phase, he’ll have another field which will include some yurts. He said there will be other individual “tent slips” scattered about.

The property includes old road beds that fell into disuse, which he’s looking to convert to be a part of a trail system. “This was a thriving community back in the 50’s and 60’s.” He points out where houses used to sit. Over the years the city stopped maintaining the roads and the homes decayed. Some overgrown foundations remain.

As we road around on the mountain on our four-wheel drive Mule, we were joined by Bobby’s daughters, Jessica and Shelby. It was clear the two love the mountain as much as their Dad. They had set up a camp site for me to photograph and were taking photos of their own for the camp’s social media. Along the way, Jessica pointed out a field where you can watch meteor showers without as much interference from the city lights as it’s on the opposite side of the mountain from downtown. She said it is also a spot where the noise from Chapman Highway is blocked.

Pointing to a particularly steep trail he’d cleared, Bobby said, “I don’t have fun unless I’m excavating a place that’s dangerous and scary and no one else wants to do it.” He showed me the Pit Viper Bike Trail and said the riders drift over on to his property, which he said is fine. He said there is a canopy over the trails when summer foliage is in. He showed me massive unusual rocks on the greenway, one of which had a tree growing all around it.

The slogan for the business is “Camp, Hike, Bike, and Float,” and you can do all of that on the property or adjacent to it. “I feel like people who camp in this campground have a lot of available activities. They could spend all day walking these trails and spend a little time down here (at the quarry). I’m not sure there is another area in the city that has this much beauty. I knew one day it would open up. I remember when I was a child, we would have picnics up there. I’ve long had a vision of a campground up here and I’ve been to lots of campgrounds and I thought, man it would be good to retire with one.”

The property has great views of south Knoxville which he is anxious to share with others. He’s proud of his property and he’s proud of his part of the city. He’d hoped it could open this past spring, but with the remaining issues with the city, that was delayed. He’s hoping to have it open for business by next spring. In the meantime, you can follow the progress on Instagram. A website is in development.