Brightening the City One Mural at a Time: A Visit With Megan Lingerfelt 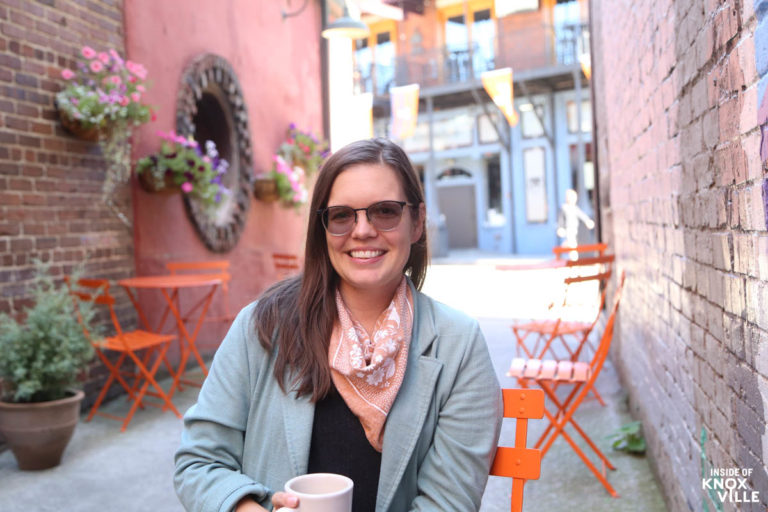 You’ve seen her work all around downtown and in some spots outside the city. She adds an update to the seasonal mural beside Coffee and Chocolate at the south end of Strong Alley each quarter and her Dolly (the second version is hers) at the other end of the alley is one of the most photographed spots in the city. Her windows just around the corner on Wall Avenue are also popular, as well as the spectacular work she did with Curtis Glover on the outside and inside of the Marriot and Tennessean as a part of the new Maker Exchange.

I frequently encountered her recently while she added a nice new look on the Promenade behind Mast General Store. The quilted mountain vistas were a perfect compliment to the space and I get to enjoy it every day as I come and go. The work was commissioned by the Property Owner’s Association for the building. After the completion of that work, we agreed to meet for coffee and a chat.

Megan has lived in a range of places, but mostly grew up in Asheville. After high school she attended the University of North Carolina Ashville. The school is set up as a research-focused school and both she and her husband participated in that, with her presenting at a conference in Montana as an undergraduate. Her husband’s research in Theoretical Physical Chemistry eventually helped him land in graduate school in Seattle at the University of Washington, though the couple lived in Massachusetts briefly after graduation in 2010.

She didn’t pursue graduate school as she saw an MFA as a path toward teaching and she knew that wasn’t for her. Once in Seattle they confronted the tight housing market, but wanting to own something, they bought a boat and moved in. “It was cheap and full of charm and we had no idea what we were getting into.” They lived on the boat for just over four years. She had a studio looking out over the police precinct which later closed due to the occupation which was just outside the doors, though by then she had moved from the city. 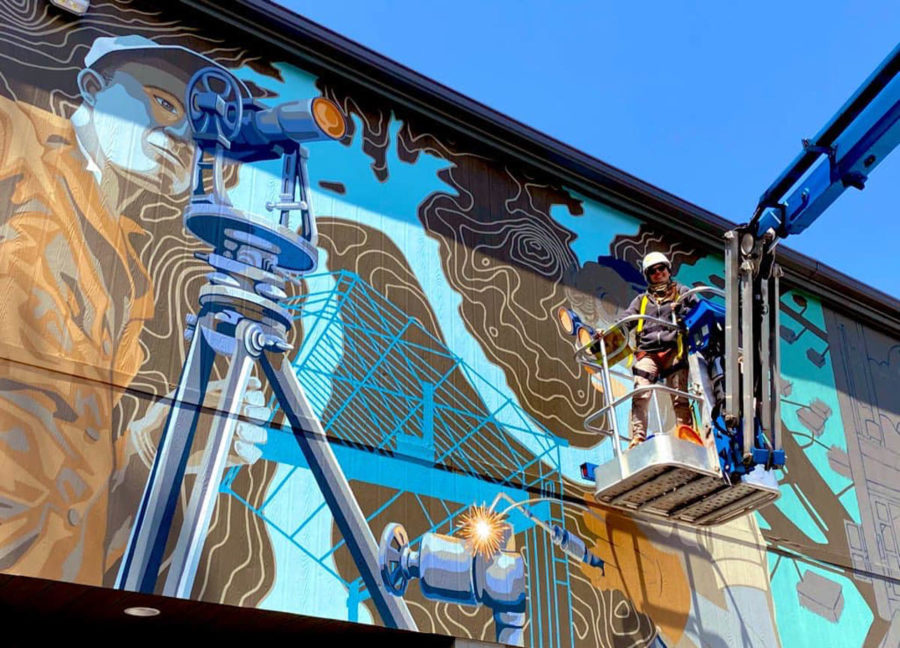 After seven years in Seattle and the completion of his Ph.D., the couple began looking for post-doctoral opportunities closer to family and found an opening at ORNL. He came early and she moved to the area in the fall 2018. They now live in Oak Ridge along a greenway they enjoyed during the early months of the pandemic. She didn’t know much about the area, but has fallen in love with the water and hiking. She said to her it feels a bit like Seattle.

During their time in Seattle she evolved artistically, saying, “I really love to do mechanical subject matter.” She said it started in college when she would paint rusted objects in a junk yard. The lifespan of practical objects draws her and she’s always wanted to paint large works. “I want it to feel substantive, to take something small and unlooked at and make it big, make it mean something.” She worked other jobs, but always painted. She felt foreign in the world of galleries.

When she got her studio, she was inside a building covered in murals. While she labored in private with works she didn’t know when she might be able to share, she was struck by the public nature of the murals. She reached out to the responsible organization, Urban Art Works, and began work. “Their focus is on youth involvement. They find kids who have done graffiti and got caught,” and redirect their energies by paying them to work with local artists on large-scale projects. She began to get commissions from that group, painted murals for restaurants she worked for, and built a portfolio.

“I learned some things in Seattle that I applied really quickly when I arrived in Knoxville . . . People don’t know you are here unless you tell them you are here. I emailed Dogwood Arts and said, ‘Hey I’m a mural artist.'” She felt she was getting momentum in Seattle and she didn’t want to lose that because of the move. “I arrived on a Saturday and had coffee with the program manager at the time (Kate Creason) on Monday.” She got all the information she needed about various arts and makers groups and got to work.

When Dogwood Arts assumed direction of the art in Strong Alley, she was asked to help coordinate that effort and has remained involved. It was a bit controversial at the time, but she said much of the art had been marked up and they were able to reach out to a couple of the artists and offer a stipend for them to restore their work. Interestingly, the person who did the Dolly mural was not part of that effort, but was someone who simply appeared and painted. He wanted to do Elvis, but Megan convinced him to paint Dolly (of whom he had never heard). When the painting was tagged a year later, she did the makeover.

She’s been here long enough now that she’s seen some of her work in Strong Alley painted over for new work and she sees that as the way it should be. “They want it to be a rotating gallery, which I think is great. There’s only so much space and it’s a continuing opportunity. Everything has some life, but then moves on to someone else. I think it should be painted again in a year or two, why not?”

Her biggest project so far has been the Maker Exchange, designed by Robin Easter Design, and executed over a three-month period. She said her projects are a mix of her own vision and executing that of others. She appreciates both and looks forward to more of each. That said, she gets requests for more Dolly projects and thinks the one may be it for her as she wants to explore other themes. “I’m floored and blessed that at any given time I have six to twelve projects at some stage.” Most of her work is in or near downtown Knoxville, but she’s starting to stretch out a bit, doing murals in South Pittsburg, Viola, Lawrenceburg, Maynardville, Lenoir City, and Oak Ridge. She’s planning one for Asheville.