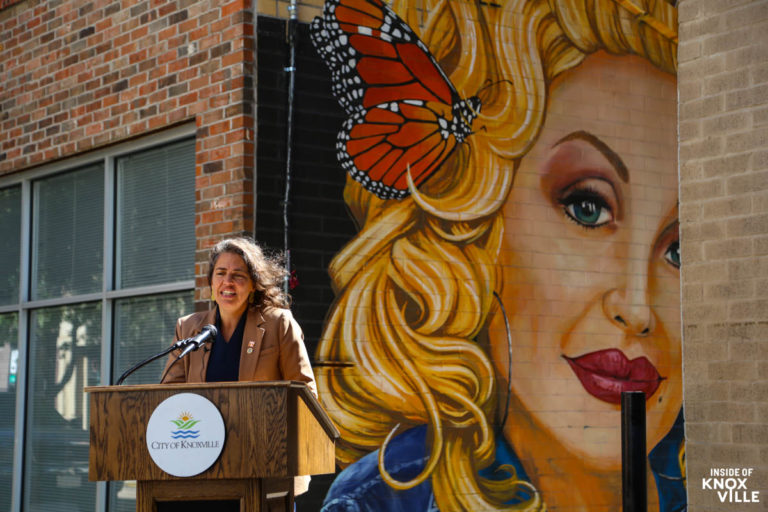 Most Knoxville residents likely don’t know that Adolph Ochs, the long-time owner and operator of the New York Times, began his career in the newspaper business here in Knoxville, on Market Square. Ochs, whose descendants continue to own and operate the paper, turned the Times into the internationally known and respected paper it is today. Two events were held recently to mark his beginnings in our city and to permanently commemorate it so that more people will know the connection.

The first of two events held recently was a panel discussion, titled “What Would Ochs Have to Say?,” was held at the East Tennessee History Center. The panel was comprised of Jack Neely,  Pulitzer Prize-winning journalist and historian Alex S. Jones, and Dr. Michael Martinez, media historian and assistant professor at the University of Tennessee School of Journalism and Electronic Media. Jones wrote The Trust: The Private and Powerful Family Behind the New York Times. The events were sponsored by the East Tennessee chapter of the Society of Professional Journalists (ETSPJ), University of Tennessee School of Journalism and Electronic Media (UTJEM), Knoxville History Project and FrontPage Foundation (FPF).

While the panel was billed as “an evening of discussion on the legacy of The New York Times owner and publisher Adolph Ochs and how he might view the current state of U.S. news media,” that largely unanswerable question got only light attention. The evening was dedicated to a more inclusive conversation about Ochs and his connection to our city.

Ochs got his start as a newsboy at the office of the Knoxville Chronicle, which was located near the northeast corner of Market square. “Over the next six years, he became an office boy, apprentice and journeyman printer at The Knoxville Tribune and then left for a newspaper job in Chattanooga at the age of 17. In 1878, he took control of the Chattanooga Times. In 1896 at age 38, he acquired The New York Times and in his inaugural edition made the famous pledge to report the news without “fear or favor.”

In an odd way, you might also trace the early inspiration of our own Jack Neely to Adolph Ochs, as well, as he pointed out that in an early writing assignment, he found the Staub’s Theatre plaque, which made mention of Ochs working there as a young usher. His family, according to Jack lived first on Cumberland near Market Street and later in a “shotgun shack on Central Street,” which he placed just the other side of the First Presbyterian Cemetery which young Adolph was afraid to walk past after his long shift at the Chronicle. He would later leave to become publisher of the Chattanooga Times, but would tell people later in life that he understood every role at a newspaper because of his time with the Chronicle.

Mr. Jones described him as a “conflicted person.” His family experienced bankruptcy when they were in Knoxville and that seemed to drive him. He was a Jewish southerner, started work at eleven and quit school at fourteen. He gambled and was often broke. When he realized the Chattanooga Times would not give him the fame and money he wanted, he convinced New York bankers to back him in purchasing the New York Times. They agreed that it would become solely his after three years of profitability and he managed that by the fourth year in charge.

His critical innovation, or at least stance which went against the trend of the day, was to publish a paper that was neutral and presented the facts. Most newspapers took a position and their reporting was colored, if not dictated, by it. He had to be swayed to agree to an editorial section and insisted on posting every letter to the editor which disagreed with their editorial stance. The exception he eventually made was in his refusal to publish letters that were pro-Hitler.

He is widely known for initiating the ball drop that has become a part of New York City’s annual New Year’s Eve celebration, but Jones pointed out that it was his copious indexing of articles that elevated the New York Times to the “paper of record.” He paid indexers who produced a cloth version (now searchable by the indexes), which were purchased by libraries across the country.

Scott and Bernadette West offered a spot on their building at 36 Market Square for the plaque and paid for it to be mounted to the wall. From the press release:

The national Society of Professional Journalists named 36 Market Square as an Historic Site in Journalism last year, one of only two designations in Tennessee. The other is in Memphis and recognizes the Christian Index, the second-oldest Black religious newspaper in the country.

Georgiana Vines, a charter member of ETSPJ and a former national SPJ president, led the push to have Ochs’ start recognized. Jennifer Ellis, Region 12 coordinator for SPJ was on hand, as well as two Ochs descendants, Celia Walker and Sarah Jane Schwarzenberg.

At the unveiling, Jack Neely pointed out that “plaques have a bad reputation” for not presenting interesting stories. He said this one was an exception. He called Adolph Ochs “one of the few people of the era who isn’t embarrassing,” for Knoxville. Georgiana Vines said she was first told to “forget it.”

The New York Times is very careful with the Ochs legacy and the SPJ is sparing in their agreement to name a place as one of the most significant journalistic sites in the country (there are only two in the state, five in the region, and 110 in the country). Vines said this “succeeded because of Jack and his knowledge.” Mayor Kincannon said, “I am happy to see this being made known by more than just a few. It’s a homage to the importance of journalism.