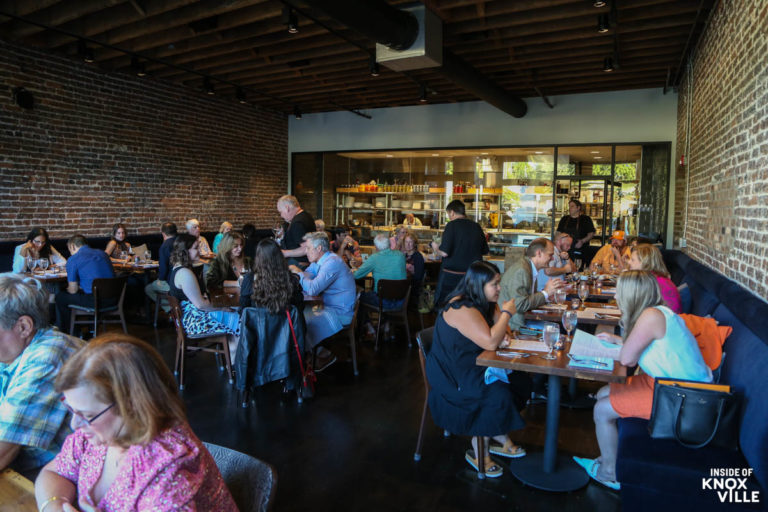 The summer Bistro By The Tracks opened at a new location, far from its original tracks. The restaurant assumed the beautiful space at 1123 North Central Street, which had been set up as a restaurant for two years, but had never opened. At about half the space as its previous location, the move may seem odd. It turns out it is a temporary move. I spoke to owner Randy Burleson, who also owns Aubrey’s, Sunspot and Fieldhouse Social, to find the answers to all our questions about how the company weathered the last three years, the move, the new space, and the longer-term plans.

He said the company ended 2019 with some stress, but with some momentum. They opened the latest Aubrey’s location in Sevierville and that was off to a good start. They held the KMA wine auction on March 8. “That weekend sales were great, people were out and about. By Monday it started getting quiet. By Sunday the 15th, we knew that was our last day of operations because the governor was closing everything down.”

Suddenly they didn’t know if they could pay everyone. They started to-go orders and that helped. “We haven’t opened any new restaurants, but have focused on projects. This restaurant was supposed to open April 2020.” He said they catered out of the space and hosted private properties. The lease on the Bearden location of Bistro By The Tracks was on a month-to-month basis as they knew the restaurant would move long-term to the nearby location of the former Orangery. A group wanted the space they had occupied and so they had to move.

Since they needed to continue operating and the Orangery location wasn’t ready, the logical move was to assume the space that had been ready for some time in Happy Holler. “This has turned out to be the biggest blessing.” He said he felt good about moving the business into that space, but some had concerns that the price point might be higher than what area residents wanted. He said they needn’t have been concerned. The patrons, he said are split between new customers from the neighborhood and dedicated patrons from Bearden.

He said the reason they moved the name from one location to the other, rather than simply opening a new restaurant and temporarily closing Bistro By The Tracks had as much to do with liquor license and inventory as anything. The liquor inventory was under that license and couldn’t be moved. The restaurant will move to the Orangery space, which is near the original tracks, when it is ready, which they hope will be by early next year. It will have a similar-sized space for dining and a large room (about 125 capacity) for catering, which is a significant driver of sales and will be a point of emphasis.

“Two days after the liquor license returns to Bearden, this place is ready to go.” Details about what will remain in the space at 1123 North Central is an open question. A restaurant will open immediately and it may be very similar to the restaurant located there now, but it will have a new name. The demand has been made clear by the enthusiastic response they have received. Additionally, the staff has loved the new location and Chef Robert McDonald has expressed interest in stay at that location.

He said the price-point has not been a concern, noting that the $60 (Mitchell Farms) steak specials have been selling out. He said that they make make changes to better serve the community. An example is brunch, which they’ve never offered, but the demand has been expressed. He’s still committed to serving a great burger at a reasonable price. He’s proud of the burger, which he calls “the best in town.” He also pointed out the shift in our city that people from Bearden would drive to Happy Holler for a meal. He said he doesn’t think that would have happened just a few short years ago.

Urban Woman and I visited the restaurant for a meal last week to see what the fuss is about. We never made it to the original location and now, with it so close, the time seemed right. We weren’t disappointed.

We started with cocktails and I loved the Amaro Sour, which she loved the Alpine Dice with the blueberry ice cubes. We shared the lettuce wraps and agreed either of us could make  a meal out of just that with maybe a soup and leave happy. Speaking of soup had a tomato soup and she had a soup with apples and both were great.

For her meal, she went with the burger (and I got her leftover half the next day) and Randy is right. It is very, very good. I had the grilled shrimp and drunken noodles and was very pleased. The sauce in the noodles was about as delicious as I’d ever hope for with peanuts giving the dish a little crunch. We finished by sharing a delicious flourless chocolate cake and a very tasty cup of coffee (I don’t say that lightly. Coffee must end the meal well, and this did.).

Enough can’t be said about the exposed beams, brick, warm lighting, and exposed kitchen. The environment is comfortable and inviting, but a touch elegant and vibrant. The staff, starting with General Manager Curtis Outland, is welcoming and knowledgeable and the entire experience was one we’ll want to repeat. I’d encourage anyone who’s considering it to give them a try.

And they are bullish on Happy Holler, noting all the growth from downtown out Central Avenue and feel “blessed” with the reception they have received. I expect we’ll see them have many years of success at this location even after the name changes on the outside of the building.