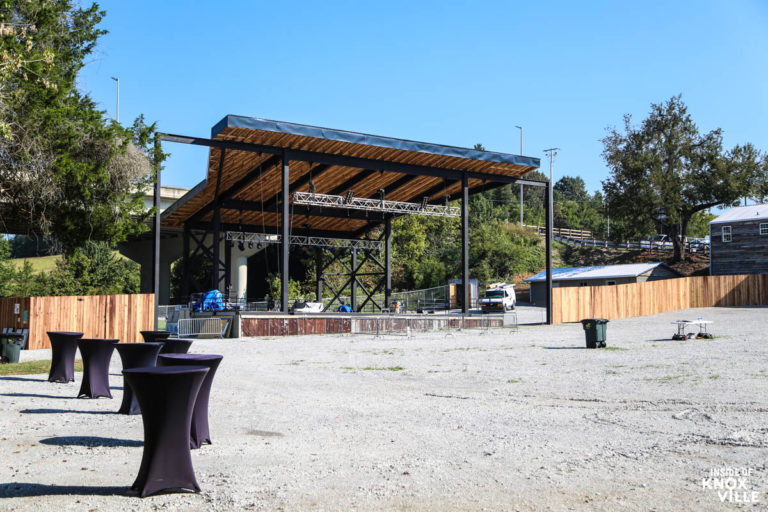 River Breeze Event Center opened with its first concert just a couple of weeks ago and has announced a fall line-up, which Communications Director Carri Lombardi said is more-or-less a soft opening to work out details while preparing for an extensive line-up in 2023. They will deliberately limit ticket sales to about 3,000 this fall, with a capacity of 7,000 to 9,000 starting next spring.

She said the first show went well, but they learned they needed an additional shuttle to run from Food City near the venue to accommodate fans from east Knox County who don’t want to drive downtown to take the shuttle back out. For everyone else, there is an elaborate shuttle system making the 10 minute trek every 45 minutes starting at 5:00 pm and running until 8:00 pm, leaving from the Publix on Cumberland, the State Street Garage, Tommy Trent’s on Market Square, and Barley’s in the Old City. Each spot has a dedicated shuttle and the ride is included in the ticket price.

The first show featured Here Come the Mummies, while the second show served up Town Mountain. Last Friday night’s show with Town Mountain was cancelled due to COVID illness among the bands entourage. The band names get more familiar as the season goes, with Paul Cauthen this Friday night, Yonder Mountain String Band (10/7), The Head and The Heart (10/21), and Blackberry Smoke (10/28). October 14 will feature a free Beat Bama Rally with lots of music and more.

The venue will also offer regular acoustic artists at the small pavilion and movies and more throughout colder months. Holiday lights are planned and the venue will be available for weddings and other events. The Holston River is now exposed and is beautiful from the site. They plan to coordinate kayaking trips from upstream (by Jon Terry and Knoxville Adventure Collective). It’s really a rare spot to hang out on the river and have a beer (except Calhoun’s downtown)

I’d planned to attend the concert that was cancelled, so that didn’t work out, but I was able to walk around the property with co-owner and developer Parker Frost. We met at the 1805 farm house, which overlooks the former drive-in and now event center. They purchased that after the other property and they’ve built an enormous deck off the house to provide ample VIP seating in the future.

Parker said they are working to preserve the historic elements of the home as much as possible, while preparing it for multiple uses, including meeting rooms, dinners, smaller weddings, and more. A tunnel under the floor to the home once offered underground passage to the river. The exterior deck offers a great view of the stage and Parker said they anticipate selling VIP tickets for larger shows and that would include a table on the deck, waitress service, and dedicated restrooms inside the house.

There is a designated spot for car share drop off and pick up and there are a few parking spaces, but the entire concept is based on the downtown shuttles. They drop off directly into the concert site and a smooth system there should avoid long lines. Parker said long lines are the enemy and they intend to have ample restrooms (40 permanent ones for each gender will be built before spring) and beer (wine and cocktails come next spring) lines. He said he hates waiting in those lines at shows and they are determined to avoid that problem. They have four food truck hook-ups at one side of the site and mobile bar setups extended into the site.

He said they are trying to make tickets and drinks affordable, so that coming to a show is a cool way to spend an evening, even if it’s not your favorite band. They have put a surface of crushed rock near the stage to avoid a muddy surface. Some shows will have a thousand reserved seats up from with general admission behind them. Tickets are mobile only and they will have a dedicated app next year. Once aboard the shuttle, concert goers are given a bracelet that allows input of card info. The bracelet is used for beer and food purchases, shortening wait times and eliminating cash. Parker said they are the only venue utilizing that system year-round.

Shulz Brau will have a beer garden set up at the shows and they’ll be serving their beer. A small acoustic stage will be built between that and the pavilion. On nice days they will open up for patrons to hang out on the river or the lawn for the afternoon. Additionally, the venue is currently selling other canned beer, seltzers, and canned wine. They plan to have full liquor service by the October shows.

The ticket booth and small office building have been refurbished and covered in barn wood harvested nearby. The tin was also harvested from that 117-year-old barn. You see it on the the front of the stage, as well. The building will host production rooms, green rooms and more.

The stage is large and professional, able to accommodate some of the largest acts with their lighting and sound. Repeaters will be placed mid-field for larger shows. It was necessary to draw the bands they want. The stage is forty-by-sixty feet. The area behind the stage is set up for tour buses to pull in comfortably and there are hook ups to power three buses at a time.

While other events will happen, the focus of the property is live music from the big stage. Parker said next year’s season will run from April to October and they hope to book fifty shows, or about two a week, though he said some weeks they may have up to four. They will hire a large full time staff to make it all work. He thinks the venue can be special and is unlike anything that Knoxville has ever had.

He’s excited about the acts they are booking, but can’t name them, just yet. He did let drop that one act is a jam band that will play three consecutive nights and will draw an audience from across the country. A major goal for the owners is to have an economic impact on downtown. They will actively promote downtown hotel packages for shows paired with the shuttle. The projected financial impact on downtown during 2023 is seven million dollars. Parker wants it to be something that makes Knoxville proud.

To learn more, check out their website. Tickets to upcoming shows are available from that page.