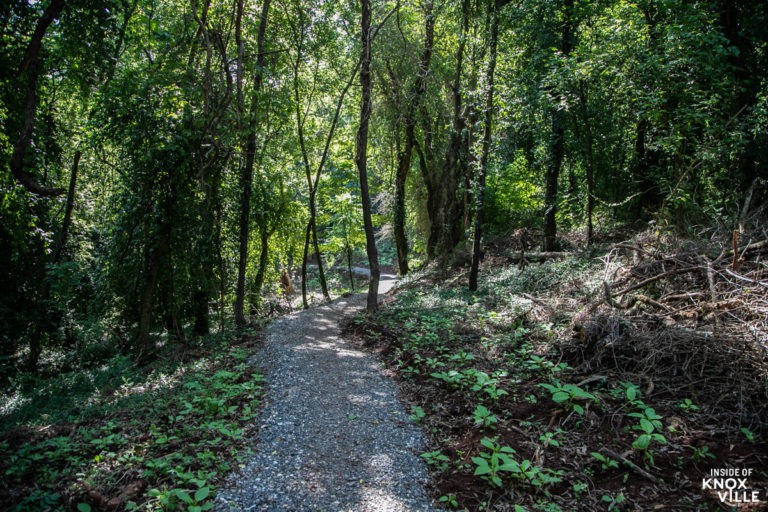 A new campground is opening soon in an amazing spot bordering Ijams, Marie Myers Park, and Baker Creek Preserve. Just off the road at 4507 Sevierville Pike, the site includes sixteen wooded acres with wetlands. Trails have been added for great fun on the site, including a black diamond trail (Murphy’s Law), but the trails also connect with all the surrounding parks, wildlife areas, and wilderness which include fifty miles of trails and another four hundred acres to explore.

The campground is jointly owned by Carter Miller, and husband/wife team of Bryan Foster and Eva Millwood. I met with Carter who told me the couple are conservationists and want to preserve south Knoxville. Carter is from Knoxville, while Bryan is from Greensboro, North Carolina, and Eva is from Greenback. Carter grew up in the Rocky Hill area and then worked in bike shops, including one in Charleston, South Carolina, where he worked for about five years.

He returned to Knoxville and worked in civil construction, traveling from Knoxville for several years. He was in the field and ultimately traveled “to every state in the country,” and entered management. He eventually wanted to come home, moving back just before the pandemic. He tried home inspection and learned it wasn’t for him.

Carter is a software developer and now he and Eva are serial entrepreneurs. The three have been friends for years and when Carter had an idea of a campground, they began to work on the project, securing three parcels of land they were able to join adjacent to already extensive trail networks. They wanted to develop it based on conservation principles, keeping the undeveloped land in as much its natural state as possible.

As plans move forward, a camp area will be developed, with a small loop road connecting it to Sevierville pike. A four-unit bathhouse will be added, as will an open-air gazebo which, along with the developed trails on the property will be open to anyone who enters by trail. The trails are ready, and riders were passing through as we talked. They hope to offer beer for sale in the gazebo with a “cantina feel.” They also expect to offer some light food.

Design is still underway, but first additions seem likely to be eight campsites with elevated tent pads and a fire pit for each site. They will also have designated “sprinter van” pull-in spots. A second loop will be added next. There will be about five one-room cabins available for rent.

We want to cater to people who bike in or drive in to camp. Bike packing has started blowing up. There are road bikers and mountain bikers, and we can cater to both. I think Knoxville is growing that direction. The possibility of having a rental fleet is being floated. “South Knoxville has become such a cool outdoor destination. In south Knoxville there are so many groups, non-profits, and businesses that help each other.

To get to this point was complicated. The group had to purchase three separate properties, the first being about eleven acres. The other two later went up for sale and they were able to add to the original purchase. The group was able to get the property rezoned for agricultural use, which is the category under which the city allows urban camping. This is the first use of that designation for this purpose. Carter said Tommy Smith, City Councilman for the area, was very helpful, as was Curtis Williams and the engineering department with the city of Knoxville. That process was completed about five months ago.

In pursuit of the environmental goal, they began removing invasive species from the property. He said it was impossible to walk through most of it and they’ve been working remove winter creeper and others. They’ve worked with Cannon and Cannon Engineering on the environmental portion. Hedstrom Landscape Architecture is helping develop the site plan. They will be planting indigenous trees to replace those they remove.

For the trails, they brought in renowned trail designer, Chris Kehmeier with C2 Recreation, from Colorado. He mapped the trails with GPS and tagged them for construction. The trails are “all weather” trails, based on gravel, which drains rapidly. The company also designed the trails in Marie Myers Park, which feature rock work and gravel, giving the trails a sense of unity. The actual construction was executed by a Vermont Company, IdeRide, which also built trails in Baker Creek. They lived on the property and built trails for four months. Carter calls it “rideable art.”

The first phase was the trails, which are largely complete. The second phase of construction will be the campsites, gazebo, and bathhouse. There will be other projects to follow. They hope to have campers by next spring or summer. Carter said he wants everyone to come enjoy the outdoors, whether they ride or cycle or simply want to enjoy the space.