Inside Cities in the Midwest 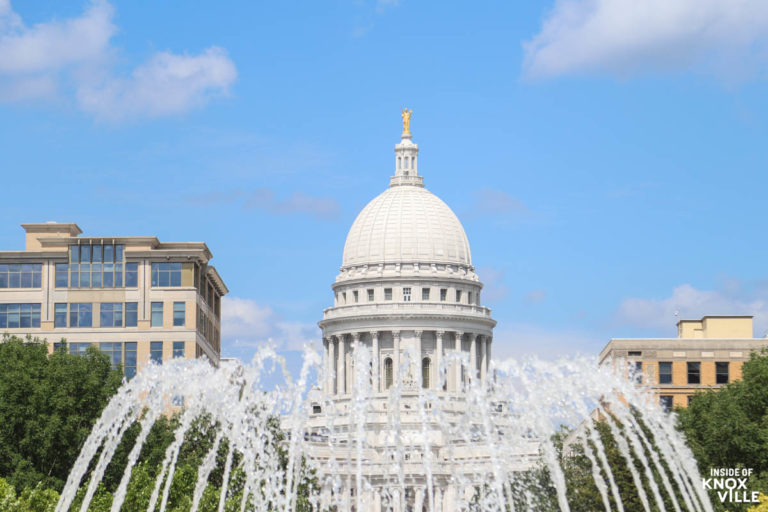 Hopefully you didn’t notice, but Urban Woman and I slipped away for eleven days earlier this month, traveling north through Kentucky, Ohio, Indiana, Illinois, Wisconsin, Minnesota, and Iowa. Most of that time was spent in Wisconsin where we’d been invited to join friends in their cabin on the prairie outside of Madison, Wisconsin. We stayed with them for three wonderful nights and explored all around the rest of the time. It was our longest break from Knoxville in five years and it felt great to get some cool air on our skin during the heat of summer.

Today I’ll talk about the cities we saw, though we drove around 2,500 miles and covered a lot of countryside. We spent one night in each of the cities (or an afternoon in one), so there is no way we truly experienced the cities to any depth. Still, it was enough to notice a few things along the way. The exception is Madison, where we spent just a little extra time. We had never been to any of the cities covered.

The first stop was Cincinnati where we arrived early afternoon and tremendously enjoyed the waterfront parks between the stadiums. The Ohio river is beautiful, as is the John A. Roebling Bridge, opened in 1866. The riverside parks are amazing, and I could only imagine what the north side of the Tennessee River might be like if we put in similar effort. It was also the first time we realized what a visual impact sports stadiums can make on a city. Ours will not be a major league stadium, but I hope it has a similar visual impact.

We enjoyed a stunning meal for dinner at Metropole (thanks Elaine, for the recommendation!) and thought that’s what we were in store for throughout the trip. It was not to be. We were consistently disappointed at the restaurants we found for dinner throughout the rest of the trip until our last night in Louisville. Both restaurants it turns out were local restaurants inside 21C Museum Hotels, even though we didn’t stay there. We’ll look for their restaurants in the future. It is very possible we simply didn’t know where to look in the other cities, but we tried.

We also noticed in Cincinnati, and it became a theme in other cities, that many of them had one or more truly striking buildings. There was at least one building that caused us to gasp a bit and say, “Look at that!” Most of these were modern buildings with flair that made a statement for the city. Will Knoxville ever have a statement building?

We left Louisville for the Madison area, staying outside the city for three nights, but spending one night inside the city. We also got a great tour from our friends and saw a good swath of the city on foot. We started at the Monona Terrace, designed by Frank Lloyd Wright and walked through the center of the city, stopping along the way at the Capitol, the public library, and the University of Wisconsin campus. We celebrated our 43rd wedding anniversary that day and it was delightful.

The capitol building is an amazing structure and is completely open for anyone (as we’ve read in the news periodically) to enter as they will. The public library was also a cool space and the city is filled with pedestrians and cyclists. Cycling with great trails was a theme in several of the cities we visited. Paved, protected bike paths abound.

We also came back around to the farmers’ market on Saturday, which surrounds the massive capitol building. Several times the size of our Market Square Farmers’ Market, the vegetables you would expect were in great supply, but the flowers really caught our eye. They were beautiful, yes, but they were quite different than what we see, and they were much cheaper than what we pay at our market. We wanted to grab some, but cooler heads prevailed as they would have simply died in the car.

There was also a small group of topless women protesting at the market, holding signs supporting bodily autonomy. I suspect most of those present agreed with the political sentiment, as Madison is a very liberal city, but no one seemed excited one way or the other about their lack of attire.

Two other food notes while we’re on Madison. First, we had our first real cheese curds (we thought we’d had them before, but then there was that squeak . . .) and didn’t care for them. We also had an amazing lunch at Fromagination (is that name imaginative or cheesy?) and ordered cheese from them when we returned. As for the cheese curds, all was not lost. One dish of fried curds from the Curd Girl at the market and we were in love.

We took a quick side trip to Milwaukee and walked along the shore of Lake Michigan (great bike and walking paths). We had a great lunch in the Milwaukee Art Museum. That building also turns out to be the star of the show and another one of those architectural wonders that defines a city. Twice a day the walls lift off the sides and become wings. You’ll see both in the photos.

Our next city was Duluth, Minnesota, on Lake Superior. We loved our time there and, again, there was a great walkway along the lake, plus a paved bike path. The views of the Lake are amazing and Duluth at night is beautiful, with the lights sparkling along the water. There is a definite time of year to visit Duluth, and this is it. August temperatures average 58 to 74, but six months or so are pretty cold, with highs in January averaging 20 degrees.

One of the most spectacular things about Duluth is the canal. Ships come off Lake Superior and enter the canal past the beautiful lighthouse and through what looks like a needle’s eye. As they approach, the ships look about twice or three times as large as the opening, but they thread it every time. Or at least every time I watched. I would totally knock that lighthouse out if I was steering.

We left Duluth and headed south to Minneapolis, with Prince on the car stereo. I wasn’t the hugest Prince fan when he was so hot, but man those songs have aged well, for me. We were given a bum steer for where to eat and wound up in the hotel restaurant, which was not so good, but oh, so expensive. Construction surrounded the Minnesota Vikings stadium but didn’t obscure the fact that it is one of the coolest structures I’ve ever seen.

Another observation from our trip: Everything you’ve read about the struggles of the hospitality industry is true. They are struggling. The ones we stayed at (all Hilton family hotels) were short staffed. Evidence was all around: No valet service where they’d had it before, no concierge, rooms not ready at check-in time. Numerous hotel rooms had something or another that needed repair.

Restaurants were similar, with some not serving all tables because they were short-staffed. Many employees, like the one who sent us to the wrong spot for dinner, seem too new to really know what they need to know. They are all working hard, but seemingly unable to keep up. If you travel or even go to local restaurants, tip bigly. They are trying.

We ended our city adventures in Louisville, Kentucky, where we really only had a partial evening. After a lot of disappointing dinners on the trip, and thanks to my friend Cecilia’s recommendation, we ate at Proof on Main and it was the second great restaurant dinner we had on the trip. It was also a cool and funky restaurant where we had a featured view of the 30-foot gold statue of David. The meat was on the table and the buns were visible through the window, as it were.

Every city we visited made us want to return, so we’ll start making plans. Of course, there was a lot of countryside, small towns, and side adventures. I’ll get to those in the next few days.