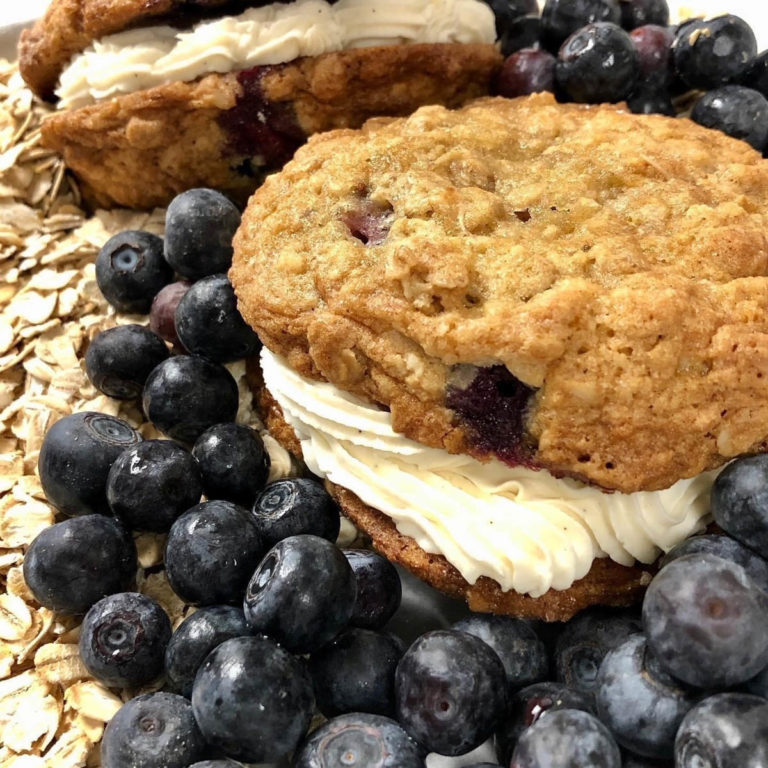 Chef Dustin Cochran is a man on a mission. He is bringing joy to the world through donuts, both traditional and gluten free and is the creator of some of the best, monster-sized cookies you will ever sink your teeth into. I had the privilege of sitting down with Dustin this week to hear his story and his passion was infectious!

Richy Kreme Donuts in Maryville had been for sale for 6 months when Chef Dustin Cochran found the listing in December of 2020. Once he toured the business, it only took 3 days to sign a contact. His extensive background working in corporate kitchens, managing Dollywood’s Splash Country, and more had given him the confidence to dive in headfirst with the purchase of his first culinary venture on his own.

Richy Kreme originally opened in Maryville in 1948 and had only had 2 owners before Dustin and his team, including his mother who now works for him, reopened it in February 2021. It sold out by 9am opening day and hasn’t slowed down since! They have many customers who have been coming since childhood and are now bringing their kids and grandkids to get Richy Kreme’s famous donuts. Dustin takes this kind of legacy to heart and has a goal to get the business to it’s 100th year!

Amid the opening of Richy Kreme Donuts, Dustin saw a post announcing the opening of Kern’s Bakery food hall and reached out to pitch Richy Kreme to them. He had first fallen in love with food halls when he was working with a corporate kitchen in Florida. Every town had a food hall and it was a fun atmosphere where you could satisfy a variety of palettes. He felt this would be a great opportunity to take his new business to new places.

Kern’s already had a donut concept coming, The Donut Theory, which also had a contract in Marble City Market. Real estate developer, Timothy Martin, asked Dustin to come in and discuss other concepts. They met in a construction trailer and Dustin pitched his next big idea, Myrtle’s Bakehouse. Timothy bit.

Dustin had loved making cookies since his days in culinary school at Walter State College where he was the president of the first accredited class to graduate. The director of the culinary school made the best cookies he had ever had so when he graduated, he asked her for the recipe. She gave it to him with no instructions and a base of 50lbs of flour and the rest of the ingredients in percentages. Dustin, however, took that challenge and made the recipe his own. He was working at UT at the time and regularly began making the cookies for staff and their families.

After seeing the large cookie concept at Gideon’s in Florida, he determined he could make the cookies he loved, but not have to make thousands a day by increasing the size of the cookie. Thus, the monster-sized, half-pound cookie that is now the signature of Myrtle’s Bakehouse was born. He had never baked 8oz cookies, so he practiced his recipe by making 6 giant sized cookies for the staff and nurses there. It was a success.

The business began with pop-ups around Knoxville and Maryville while he awaited the opening of Kern’s Bakery. When that project was delayed, he bought in at Marble City Market food hall upon it’s opening in November of 2021. They are still there cranking out these delicious cookies with daily specials and their original three favorites-Pucker Up, OG and Scruffy City.

His next venture began early in 2022, and involved the business he’d bumped into at Kerns. Laura Crawford, who still held the contract at Kerns had opened The Donut Theory in Marble City Market. She approached Dustin about taking over the celiac-friendly donut and chicken concept. Her family was moving out of state, and she did not want the business to die.

Dustin had donated his time to help them out earlier in the year when Laura was out on medical leave, so he already had knowledge of the recipes, business model and knew things he could change to make it his own. He agreed and took over in April of 2022. He’s already made a few delicious tweaks here and there with the recipes, but still has more ideas up his chef’s coat sleeve.

The Donut Theory is not just gluten-free, it is truly a celiac friendly environment that has very specific guidelines to follow down to never having a speck of gluten coming into the space. They must put in more training time with staff to make sure the specific guidelines are closely adhered to so their loyal gluten-free and celiac customers can come in and eat good food safely.

I can attest to the quality of the food personally and as an amateur foodie, I can tell you, it is outstanding! Gluten-free has a bad reputation in the food world, but you will not find that at The Donut Theory. This is the best gluten-free you have ever eaten!

The day after he signed the contract to take over The Donut Theory, he was approached by the former Pop’s Donuts owner to ask Dustin to take over the business in Rocky Hill. After some initial hesitation, he decided to go for it and the new Richy Kreme 2 opened in July 2022. This business has continued to grow and thrive as well.

He is on track to open with Kern’s Bakery in the Spring of 2023, with both his lease and the one he bought from Laura and The Donut Theory. He has some creative ideas for how to mix up the sweets game there with things like milk and cookie flights where you can sample 4 cookie wedges at a time with everyone’s favorite pairing, ice cold milk. He also has some great ideas for how to shake up the donut concept in the new location as well. Donut holes with a variety of toppings that you can change up each time you visit? I’m in!

If you have lost count, within 18 months, Dustin went from owning no businesses to now owning and operating 3 successful businesses with 4 shops in the Knoxville area, 6 once Kern’s Bakery opens. He also has around 20 wholesale contracts. Through it all he has learned to be flexible and he has learned that people want to be part of something.

He sees the legacy of Richy Kreme Donuts, Myrtle’s Bakehouse (named after his own trailblazing grandma!) and The Donut Theory as giving people that place to belong whether as a staff member or a customer. Making a positive difference in people’s lives matters to Dustin and his team. I felt that as he relayed story after story, with tears in his eyes, of people who come into his stores and share the impact his food has had on people in the community. It was a beautiful thing.

Lucky for us, his dreaming does not stop here. He is scoping out other areas to open his concepts around Knoxville so be on the lookout for more from Chef Cochran and his dedicated team! Stay in touch with them through their social media pages here, here and here!