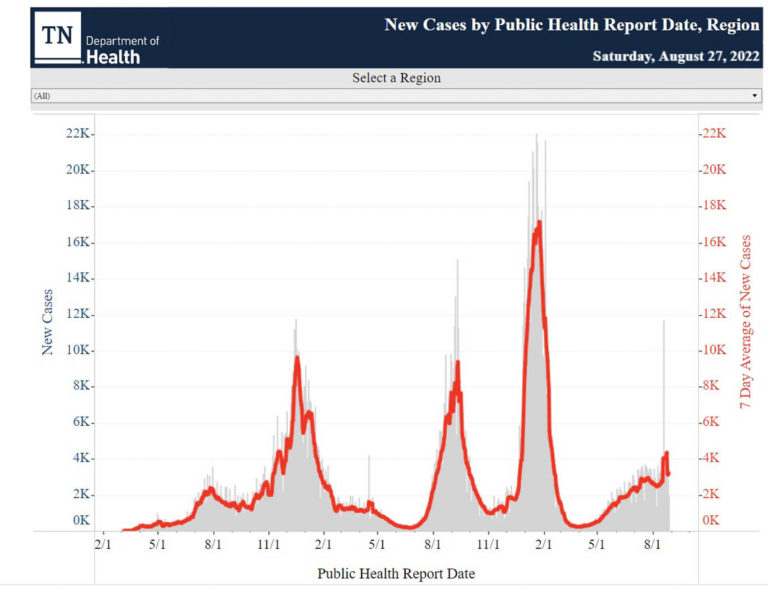 It’s been about six weeks since my last article on COVID-19. No one wished more than myself that it would be my last. But here we are: After showing signs of slowing, the spread of COVID-19 has increased in our area. Whereas U.S. rates are dropping, Tennessee and Knox County rates are doing the opposite. I personally know five people who are currently positive. So, here we go.

To those who say it no longer matters, that we have to live our lives, I get it. We do have to live our lives and I’m trying to enjoy mine as much as anyone. That said, when the numbers spike, some of us will choose to be more careful about where we go and will consider masking in crowds. Yes, we probably won’t die if we get COVID-19, but we could be very sick, miss work, and have plans disrupted. Who wants that?

As for deaths, we can’t readily dismiss that, either. Barely over 50% of Knox County residents are vaccinated, leaving half vulnerable to death from the virus. It was the third leading cause of death in each of the last two years in the U.S. and is on pace to rank the same this year. The virus is the predominant reason why life expectancy has dropped more in the last two years in the U.S. than it has in any two years in the last hundred years, falling from 78.8 years to 76 years. Most other developed countries reversed the trend in 2021 due to levels of vaccination the U.S. has not reached.

So, let’s take a look at where we are based on the most recent information. The statistics referenced below, unless otherwise linked, are largely based on numbers from these sites: Worldometers.com, The New York Times COVID Database, The State of Tennessee COVID Dashboard, The State of Tennessee COVID Vaccination Dashboard, The Knox County Health Department COVID Dashboard, and the The KCHD COVID Vaccination Dashboard.

You may remember that I developed cutoffs for how many cases, deaths etc. would warrant stopping or starting my COVID reports once it became obvious this wasn’t going to be a short-term battle. At the international level, I’m looking for us to stay below 500,000 cases per day and 7,500 deaths per day. Of course, we all know current case numbers are massively undercounted because of home-testing, but I’ll stick with those markers.

Six weeks ago, the world was averaging just over 914,000 confirmed cases per day, well over the limit I’d set, despite the current undercounting. Deaths, however, were much lower, at about 1,500 per day, thanks to a global full vaccination rate of about 63%. Given the two numbers, the much lower rate of deaths seemed more significant.

Current global case numbers are much better (again, as far as we are able to know), with just a bit over 621,000 cases per day being confirmed. They have dropped by 20% in just the last week. While the U.S. continues to rank third in cases confirmed per day, Japan and South Korea, countries with low early numbers have surged to the top of the list. Deaths are averaging 1,786 per day, just higher than six weeks ago, but 22% lower than one week ago.

At the national level, I’d set my cut offs for less than 75,000 new cases per day and fewer than 1,200 deaths per day. The fact that the death numbers now seem so high is a reminder of how bad this was before vaccines became available.

Six weeks ago the U.S. was averaging 130,000 cases and 425 deaths per day. The numbers were rising, though the number of deaths did not rise at the same rate as cases. Hospitalizations were at 41,000 and rising. 67% of Americans were fully vaccinated (not counting boosters).

The percentage of Americans considered fully vaccinated remains at 67%, the same as at the time of my last report.

At the state level, I’m looking at three metrics. I’d like to see cases below 1,200 per day, deaths below 40 per day and COVID-19 hospitalizations below 1,000. When last we tuned in, we had hit two of the three and they were all dropping rapidly.

At our last report, six weeks ago, the state was averaging 2,400 cases per day, twice my goal (which was based on numbers we’d attained earlier), despite the fact that many cases are no longer reported. Deaths were averaging 7 per day across the entire state, a remarkable number. Hospitalizations were at 701 and rising quickly.

The most recent report provided by the state indicates a rate of about 3,200 per day. This is a drop from last week when the state had the highest rate of any state in the U.S. Again, 1,200 cases per day was my cutoff and we are almost triple that despite the fact that many cases are no longer reported.

Deaths from COVID-19 have have more than doubled in the six weeks since our last report, from seven per day to sixteen per day. Hospitalizations have also increased over the period, from 701 to 799 currently hospitalized COVID-19 patients. The state’s positive test rate has remained steady and high at about 27%, well above the 5% recommended threshold.

55% of state residents are fully vaccinated, unchanged from the previous report.

At the local level, I am now following three metrics with the following goals: cases below 100 per day, hospitalizations below 250, and deaths below one a day.

At the last report, we were averaging 95 cases per day and the number was hovering around 100. Current numbers indicate we are average 113 per day, which is over my threshold, even though perhaps a majority of cases are not being reported. As a comparison, when I stopped weekly reporting, we were averaging 37 per day. There have been over 109,000 confirmed cases in the county and nearly 36,000 probable cases.

Since my last report, six weeks ago, 57 additional deaths in Knox County from COVID-19 have been reported. I would assume that the overwhelming majority of these are among people who are not vaccinated, as those represented the vast majority hospitalized when last we were provided with dashboards from local hospitals.