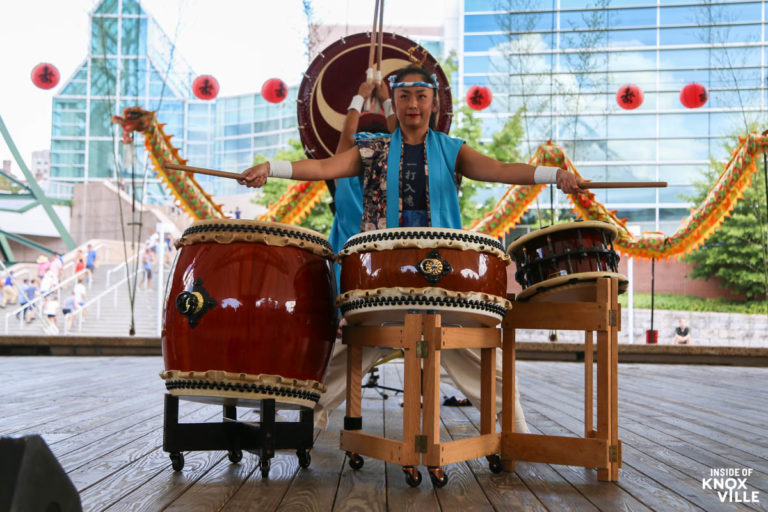 It has become a phenomenon relative to all Knoxville events. The festival, which began in Krutch Park Extension with an estimated attendance through the day of about 3,000, has grown each year. The second year, still in the same location, the festival drew about 7,000. In its third iteration, it moved to Market Square and Market Street, which seemed like a bold move at the time. It drew 15,000 the first year and more the second.

The festival moved to the World’s Fair Park in 2019 and drew an estimated 30,000 to 40,000. The regular event was cancelled in 2020 and 2021 and this year marked its second occurrence on the site. The education and commercial booths, food stations, and entertainment stages stretched from one end of the World’s Fair Park to the other and, by the afternoon were significantly crowded. No other festival covers the entire site and throws in a packed amphitheater. I’m not sure what the estimated crowd size will be, but 50,000 would not surprise me.

The north lawn included primarily vendors, activities, and a second entertainment stage. I’ve never seen so many Asian-related items, from attire to pop-culture items, and more. I also stopped in at that stage and listed to some J-pop.

The event started with a parade from the fountains, circling the north lawn, and ending on the Amphitheater stage. Thirteen countries participated in the always-colorful proceedings. Once assembled on the stage, each was introduced and then representatives of each group participated in leading the crowd in a rendition of “We Are the World.”

During their introductions, a couple of rather overt political moves were made. Taiwan specifically included the words “independent country” in their remarks and the woman representing Myanmar talked of the government-led genocide in her country. What followed on that stage, was an uninterrupted string of performances of song, dance, and more through the 6:00 pm ending time.

The south performance lawn was filled with the thirteen countries (plus Tibet) and their cultural and culinary offerings. Each country had at least one food vendor and some had as many as three. The increased number of food vendors helped with the lines, but at peak, they were quite long. On a steamy day, bubble tea commanded the longest wait. I was lucky enough to find a fairly short line at the Indonesian booth and enjoyed a fine meal of bakmi goreng and spring rolls.

Originally intended to last the full eight hours, I made it about four-and-one-half before determining the better part of wisdom was for me to head to an air conditioner. It was a vibrant, delightful, and education festival, as always. It’s a fun and easy one to photograph because there are beautiful shots in every direction.

The larger photographs show here are some of my favorites, but I could just as easily picked another dozen. I’ve included the entire gallery below for those of you who want to take a deeper dive. Just click to enlarge on a computer and use those little scissor fingers to enlarge on a phone.